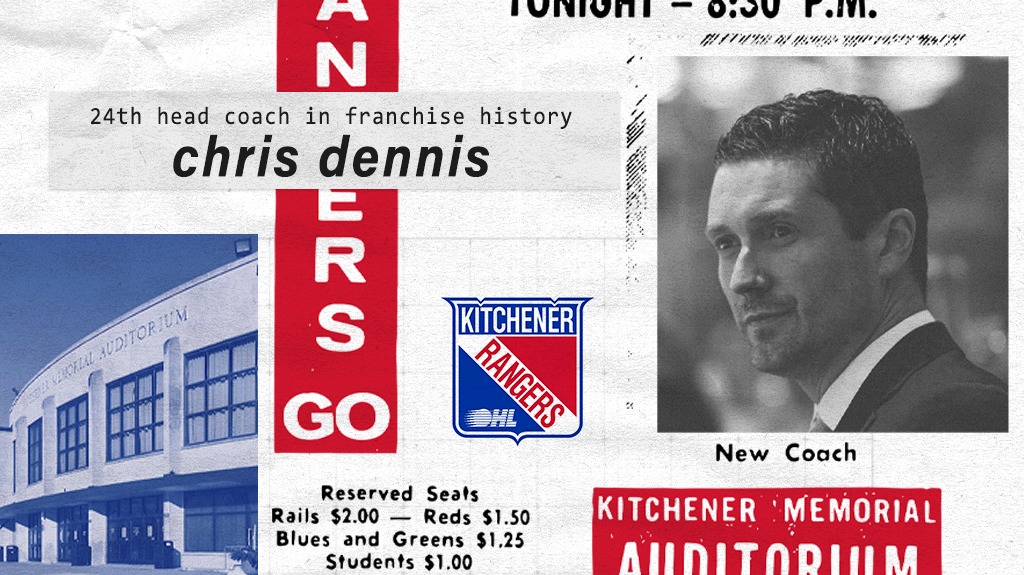 Dennis, 42, comes to the Rangers with 10 years of NHL experience, serving the Toronto Maple Leafs in different capacities as both an assistant coach and video coach, spanning the tenures of Hall of Famer Pat Quinn, Paul Maurice, Ron Wilson and Randy Carlyle.

“We are excited to welcome Chris and the Dennis family to the Rangers,” said Kitchener Rangers General Manager Mike McKenzie. “Chris checked all the boxes we were looking at when hiring a new coach. He has valuable head coaching experience from his very successful years at York University.”

“He’s coached professionally at both the NHL and AHL levels under several experienced and high-level coaches. Most recently, he’s spent time in the OHL, and will come to our program understanding this league and the coaching needs at the junior hockey level.”

Dennis spent three years in the Vegas Golden Knights organization as an assistant coach with the Chicago Wolves of the American Hockey League (AHL). He played a key role in helping the team capture the AHL’s Central Division title in two of his three seasons (2017-18 and 2018-19) prior to earning the AHL’s Western Conference title during the 2018-19 campaign, where the club eventually advanced to the AHL’s Calder Cup Finals. Dennis was also on the bench when the team set a pair of franchise records in earning points in 14-straight games in addition to recording 13 consecutive home wins during the 2017-18 season. Most recently, Dennis served as an associate coach for the OHL’s Barrie Colts during the 2021-22 campaign.

“It’s a dream come true to be the Head Coach of the Kitchener Rangers,” said Dennis. “It’s a first-class organization that is driven to be one of the best teams in the Canadian Hockey League. Having the necessary people, resources and players in place to make a run and challenge for championships is exciting. The fan base is amazing and it’s a full building most nights. You want that excitement and that passion. Kitchener has that and then some.”

The Toronto, Ont. native earned his head coaching experience at York University in U Sports where he took over a last-place program and transformed it from worst-to-first in just one season, becoming regular-season champions of the Ontario University Athletics (OUA) West Conference in 2016. He then led the Lions to capture the Queen’s Cup in 2017 as champions of the 20-team OUA conference. Dennis was impressively named two-time OUA Coach of the Year for both his two seasons at York University.

“In getting to know Mike and Joe over the years, as time moved on, it just seemed that this is a great fit for myself professionally and for my family personally,” added Dennis. “I’m grateful for the opportunity and look forward to beginning in Kitchener.”

Dennis graduated from York University with a Bachelor of Science (BSc) degree in Kinesiology & Health Science in 2002 and earned an Honours Bachelor of Arts degree in Education Studies as a licensed teacher in 2004. He currently resides in Etobicoke with his wife Melissa and two sons, Luke and Ryan.

3:24
Rangers' Bienkowski recognized with the Bill Long Award
14 hours ago