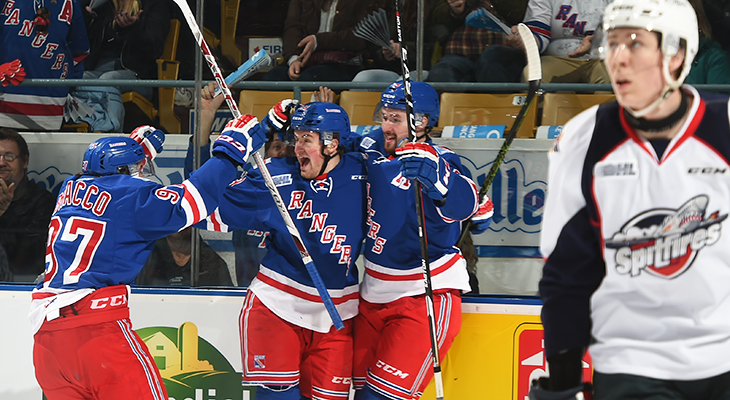 The Kitchener Rangers are on their way to Round 2 of the OHL Playoffs.

Jeremy Bracco and Ryan MacInnis each tallied a goal and three assists as the Rangers defeated the Windsor Spitfires 5-2 in Game 5 of their best-of-seven Western Conference quarter-final series in front of 6,557 fans at the Kitchener Memorial Auditorium Complex on Friday night.

Besides the stellar play of starting goaltender Dawson Carty, the Rangers capitalized with a potent power play which saw them score three times with the man advantage.

Carty was again impressive between the pipes for the Blueshirts, turning aside 28 of 30 Windsor shots strewn his way to earn his fourth career postseason win.

The Rangers got off to a hot start, scoring just 20 seconds into Game 4 with their first shot on goal to take an early lead, but the Spitfires would even things up at 1-1 before the period was out.

The middle frame was where the Rangers did the most damage, as they tallied three goals in a span of just 1:58 to rebound from a 2-1 deficit, taking a 4-2 lead while outshooting the Spitfires 15-9.

The home team played sound defensively in the third period, while adding another power play goal to secure the 5-2 victory. Rangers head coach Mike Van Ryn was pleased with the performance from his team, and credited hard work put in off the ice which elicited tonight’s positive result.

“It feels good to wrap up Round 1,” said the coach, post-game. “I’m happy for my guys. They worked hard, and kudos to Windsor, they played us hard.

“One guy that doesn’t get any credit around here is [Rangers head strength and conditioning coach] Brandon Merli. Our guys are in shape that allowed us to play hard right to the end. I’m proud of them. Hopefully we just keep it rolling after this.”

Bracco noted that special teams were something that hindered the club in Game 4, but they were able to put the shoe on the other foot and use it to their advantage at the Aud tonight.

“I think if you look at Game 4, they took advantage of their power play opportunities on the [Henderson] call and in overtime, but our [power play] was clicking tonight.

“We stressed the importance of it coming into the playoffs, and tonight we were able to really execute it.”

The line of Robinson, MacInnis and Bracco would finish the night with nine points, and captain MacInnis reinforced the fact that the three have an undeniable chemistry as linemates.

“Playing with [Bracco and Robinson]; they both work hard. They’re great playmakers, and they can score goals too. We’re a good combination, the three of us.

“It was a good series – a tough one – but we’re ready for the next one,” added MacInnis.

The Rangers next round opponent of course hasn’t yet been decided, as the Erie Otters are the only other Western Conference team to advance to Round 2 thus far. As of the end of Friday night’s games, the London Knights (3) lead the Owen Sound Attack (6) in their best-of-seven series 3-2, while the Sault Ste. Marie Greyhounds (7) lead the Sarnia Sting (2) in their series 3-1.

The Rangers would open the scoring on their first shot of the game just 20 seconds in, Robinson’s sixth of the postseason from MacInnis and Bracco, to give the Rangers a 1-0 lead.

The Spitfires would tie the game on Gabriel Vilardi’s first of the playoffs, from Cole Carter and Andrew Burns, at 9:38.

The first period would end with the Rangers and Spitfires notched at a goal apiece, with Windsor leading 9-8 in shots.

The second period would remain scoreless until a power play goal from Windsor’s Brendan Lemieux gave the Spitfires at 2-1 lead, from Christian Fischer and Vilardi, at 15:27.

The Rangers would answer back with a power play goal of their own just 1:03 later, as MacInnis tallied his third goal of the playoffs, from Adam Mascherin and Bracco, at 16:30.

Their second power play goal of the night would come just under two minutes later, as Bracco collected his first goal of the night – and third point – making it 3-2 Rangers at 18:12 from MacInnis and Mascherin.

The Rangers pounced again just 16 seconds later, while Bracco’s goal announcement was still being read over the PA system in the Aud, as Connor Hall registered his first career postseason goal at 18:28, assisted by David Miller.

Kitchener would outshoot Windsor 23-18 through 40 minutes, including 15-9 in the second period.

Mascherin added the dagger, another Rangers power play goal with just 3:07 to play, making it 5-2 Rangers from Bracco and MacInnis which would be how the score would settle.

Michael DiPietro took the loss in goal for the Spitfires, playing the final three games of the series after Mario Culina got the nod in Games 1 and 2. DiPietro allowed five goals on 33 shots while making 28 saves.

The Rangers finished the night 3-for-9 on the power play, while the Spitfires were 1-for-4 with the man advantage.

Adam Mascherin (3), Ryan MacInnis (2) and Jeremy Bracco (1) were chosen as the Three Stars of the Game.