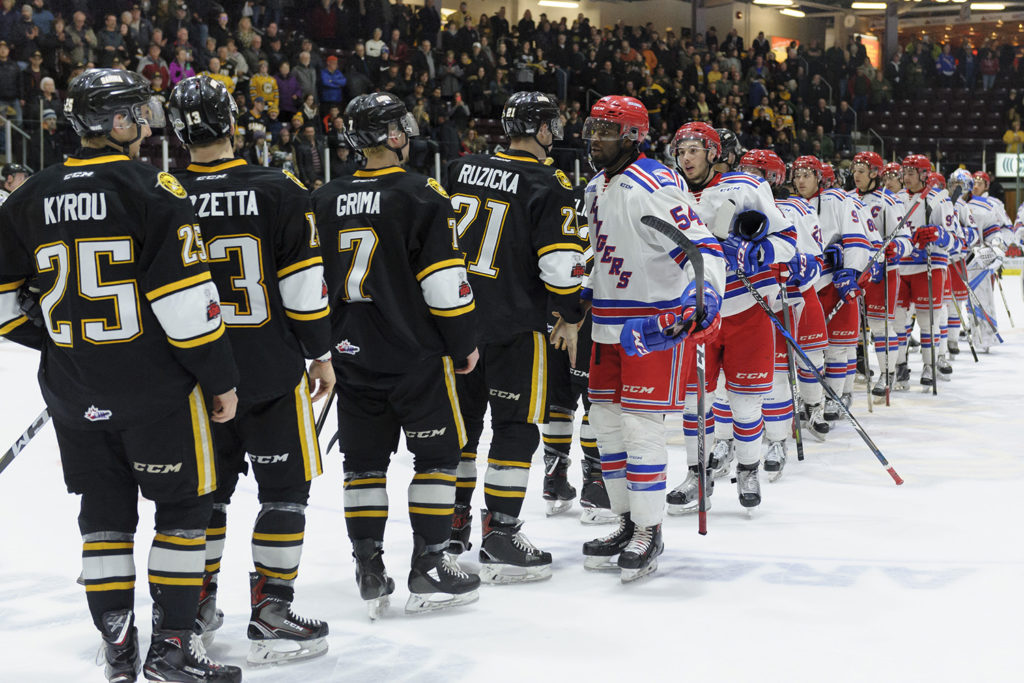 As much as the Kitchener Rangers love playing in front of Rangers Nation at The Aud, they set out to wrap up their best-of-seven series vs. the Sarnia Sting as soon as possible on the road in Game 6 on Sunday night.

Adam Mascherin tallied a pair of goals – including the game winner – and added an assist as the Rangers skated to a 6-2 win over the Sting in front of 4,078 fans at Progressive Auto Sales Arena.

Game dates and times have not yet been determined, but tickets to Games “I” and “J” of Round 3 (Games 1 and 2 if vs. the Owen Sound Attack, or Games 3 and 4 if vs. the Sault Ste. Marie Greyhounds) will go on sale Monday, April 16 at 10am online, by phone, or in person at City in the Square of the Activa Box Office at The Aud.

In tonight’s Game 6, the Rangers skated to a 2-1 lead through 20 minutes of play, then added a single marker in the second to enter the third period with a two-goal edge, up 3-1.

It was in the third period that the Blueshirts gained some separation, as they came out of the gate in the final frame scoring twice just 1:23 apart in the opening three-plus minutes to take a 5-1 lead they wouldn’t relinquish.

Along with Mascherin, Givani Smith also potted a pair of goals, both coming in that third period of play. Logan Brown notched a goal and an assist, and Kole Sherwood also chipped in with a multi-point effort with a pair of helpers.

Mario Culina picked up his eighth win of the playoffs and was again busy in goal. He turned aside 37 of 39 Sarnia shots to backstop the Rangers to their second straight series clinching road win.

Justin Fazio took the loss and played in his final Ontario Hockey League game, as did fellow overagers Jordan Ernst and Connor Schlichting. Fazio allowed six goals while making 23 saves in the loss.

Through two rounds of playoffs, the Rangers see three players in the Top 5 in scoring, beginning with Logan Brown who sits atop the perch with 21 points. Mascherin and Sherwood each have 17 points to their names, and are tied for third overall in playoff scoring.

As for Culina, his numbers in the playoffs have also been nothing short of impressive. He sits tied for the most wins amongst goaltenders with eight, while his goals against average of 2.78 and save percentage of 0.917 are both ranked fourth.

On Sunday, it was the Sting who struck first as Anthony Salinitri – playing in his first game of the series – made it 1-0 Sarnia, from Jonathan Ang and Drake Rymsha at 15:43.

But the momentum didn’t remain in the home team’s favour for long, as Mascherin made it a 1-1, from Sherwood, just 36 seconds later at 16:19. But before the period was out, Greg Meireles with a great individual effort put the Rangers in front, 2-1, with just 17.3 seconds remaining in the frame.

Shots through the first period of play favoured Sarnia, 13-9.

Mascherin’s second of the game came late in the second period as the Blueshirts made it 3-1, from Brown and Logan Stanley, at 18:29. It was the lone snipe of the second, which again saw the Sting outshoot the Rangers, then by a total of 27-17 through 40 minutes.

The Sting needed to come out of the second intermission quickly to cut into the Rangers two-goal lead, but instead it was Kitchener who continued to pile it on.

First, it was Smith who made it a 4-1 game, unassisted at 2:03, then Brown added his third goal of the playoffs to score the fifth straight Rangers goal to make it 5-1, from Sherwood and Jonathan Yantsis, at 3:26.

Moments later though, the visitors found themselves shorthanded and despite the Sting’s challenges throughout the playoffs while with the man advantage, they made this opportunity count. Jordan Kyrou cut the lead to 5-2 with the power play goal, from Cam Dineen and Rymsha, at at 5:27.

Then, at 7:57, the Rangers were whistled for a four-minute double minor, and all of a sudden, the Sting seemed to breathe new life.

But the Rangers buckled down, killed all four minutes, then added another insurance marker by Smith at 15:17, from Mascherin and Giovanni Vallati, to secure the 6-2 win and series victory.

The Rangers were 0-for-1 on the power play, while the Sting were 1-for-4 with the man advantage.