Rangers on to second round with Game 6 win in Guelph 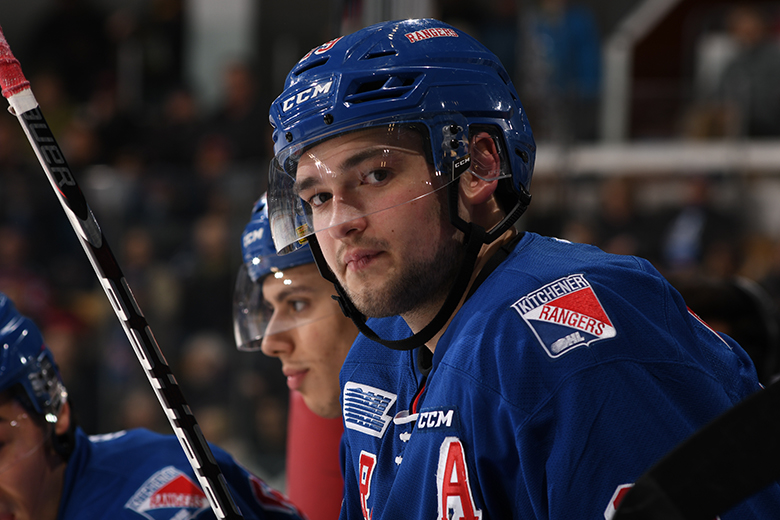 Logan Brown scored a pair of goals an added an assist to help propel the Kitchener Rangers to a 5-2 win over the Guelph Storm in Game 6 in front of 3,313 fans at the Sleeman Centre – which included many loud and dedicated members of Rangers Nation – and in front of a nationally televised audience on Sportsnet on Sunday afternoon.

The Rangers win the best-of-seven series, 4-2, and will face the Sarnia Sting in Round 2 of the Ontario Hockey League playoffs.

Tickets to Games 1 and 2 (Home Games “E” and “F”) will go on sale to the general public Monday, April 2 at 10am with purchase options listed below.

Game dates and times for Round 2 versus the Sarnia Sting can be found here.

Brown potted an impressive 13 points (2G, 11A) in the Rangers six-game opening round series, good enough to lead all OHL skaters in points. Adam Mascherin (4G, 7A) tallied 11 points in the series ranking him third in league playoff scoring, while Kole Sherwood sits tied for fourth with 10 points. Sherwood’s seven goals have him tied for the most in OHL post-season play with Hamilton’s Brandon Saigeon.

Defenceman Kyle Gentles also deserves a nod, emerging from the opening round tied for third in the league in plus/minus with a +8 rating, just two back of the Bulldogs’ Justin Lemcke with a league-best +10.

On Sunday, Givani Smith, Riley Damiani and Joseph Garreffa were the other goal scorers for the Rangers, who skated to a 1-1 tie through 20 minutes of play then exploded with three second period goals – including one just 14 seconds into the middle stanza, and two goals just 38 seconds apart near the midway point of the period – to carry a 4-2 lead into the third.

It was the first road win of the series by either team, and it all began on the stick of Brown who, despite coming into the series tied for the team lead in points with 10, was still searching for his first playoff goal. That goal came just 6:48 into the opening period, as a shot by Sherwood in the slot found a piece of Brown, giving the Rangers the 1-0 edge.

But the lead was shirt-lived as Ryan Merkley made it a 1-1 game with a power play goal just 46 seconds later, from Nate Schnarr and Isaac Ratcliffe, at 7:34.

The teams skated into the first intermission at a 1-1 stalemate, with shots leaning in Guelph’s favour, 12-9.

Smith continued to torch his former team just 14 seconds into the second period with his fourth goal of the series, burying a slick pass from Brown past Anthony Popovich to give the Blueshirts a 2-1 lead. Logan Stanley started the play by finding Brown and earned the secondary assist.

As the midway point of the game approached, Brown blocked a shot which sent he and Smith through the neutral zone and into the offensive end on a 2-on-1. Smith passed back to Brown, who notched his second of the game at 8:53 for the eventual game winner to make it 3-1.

Just 38 seconds later the Rangers would make it a three-goal game as Adam Liska sprung Greg Meireles through the centre ice zone, who saucered the puck to a trailing Damiani who made it 4-1 Kitchener at 9:31.

The Rangers looked poised to take the three-goal cushion into the second intermission, but a hit on Giovanni Vallati went unnoticed, which ultimately led to a Guelph goal by Ratcliffe on the same sequence, making it 4-2 at 19:35.

In the third, just one more goal would come and it would come on the stick of Joseph Garreffa. Joey G’s fifth goal of the series came on a pretty 3-on-1 for the Rangers, with assists to Mascherin and Connor Bunnaman at 17:30 to solidify the 5-2 win.

Final shots on goal were 32-31 Kitchener after the Rangers outshot the Storm 12-9 in the third period.

Mario Culina was once again study and reliable in goal for the Blueshirts, turning aside 29 of 31 Storm shots.

The Rangers were 0-for-2 on the power play, while the Storm were 1-for-3 with the man advantage.