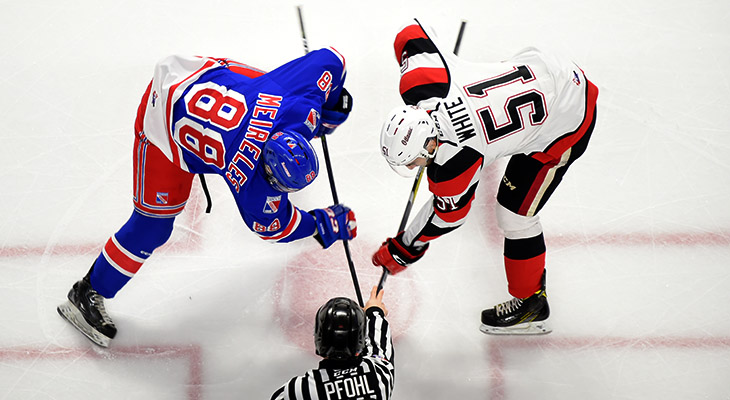 No matter where you play them – at home or on the road – there’s always a little extra motivation when you face off against your hometown team.

That was certainly the case for the Kitchener Rangers contingent from the Ottawa area on Sunday.

Giovanni Vallati, also born in Ottawa, was an impact player at both ends of the ice and finished the afternoon with a plus/minus rating of +2.

Rookie Jonathan Yantsis tallied his first two OHL points on the afternoon with a pair of assists in the win.

Luke Opilka (9-8-1-1) played his way back into the win column for the Rangers making some incredible stops, including a sequence in particular with nearly six or seven minutes to play in the second period turning aside a number of point blank shots by the 67’s attack. He would make a total of 29 saves on 32 shots on the afternoon.

The Rangers sweep the season series with the 67’s, following a 5-4 overtime win at TD Place in Ottawa back on December 3rd.

Carter opened the scoring with his 11th goal of the season, and first as a member of the Rangers, putting Kitchener up 1-0 just 3:50 into the game. Yantsis notched his first OHL point with the primary assist, and Eric Guest picked up the second helper.

With just over a minute and a half left in the period, Greg Meireles scored his 12th of the season to give the Rangers a 2-0 lead, from Joseph Garreffa and Elijah Roberts, at 18:27.

First period shots on goal were 14-11 in favour of the Rangers.

The 67’s cut the Kitchener lead to 2-1 just minutes into the second period on a goal by Zack Dorval, from David Pearce and Noel Hoefenmayer, at 3:01.

With McHugh breaking into the offensive zone he was hauled down by a 67’s defenceman and awarded a penalty shot. He would beat Lazarev through the five-hole on the shot, extending the Rangers lead to 3-1 with his 10th of the season at 15:33.

The offensive chances continued to present themselves for the Rangers, and Darby Llewellyn’s patience paid off with his 14th goal of the season – assistsed by Andrew Burns – at 18:03 to make it 4-1.

Kody Clark again cut the Rangers lead to two, tallying his fourth goal of the season just 19 seconds later at 18:27 from Patrick White, to make it 4-2.

Connor Bunnaman’s 23rd of the season proved to be the insurance goal, giving the Rangers a 5-2 lead at the 7:38 mark of the third period, assisted by Roberts and Yantsis.

Travis Barron tallied his seventh of the season to make it 5-3 Kitchener, but it was as close as the 67’s would come to closing the gap. Mathieu Foget and Kyle Auger earned the assists which closed out the game’s scoring.

Third period shots on goal were 9-8 Kitchener for a game-total of 32-30 Ottawa.

The Rangers head back on the road for the first time since playing five-straight at home, as they take on the Erie Otters at the Erie Insurance Arena on Tuesday, January 24th at 7pm for a rescheduled game that was originally scheduled for December 14th.