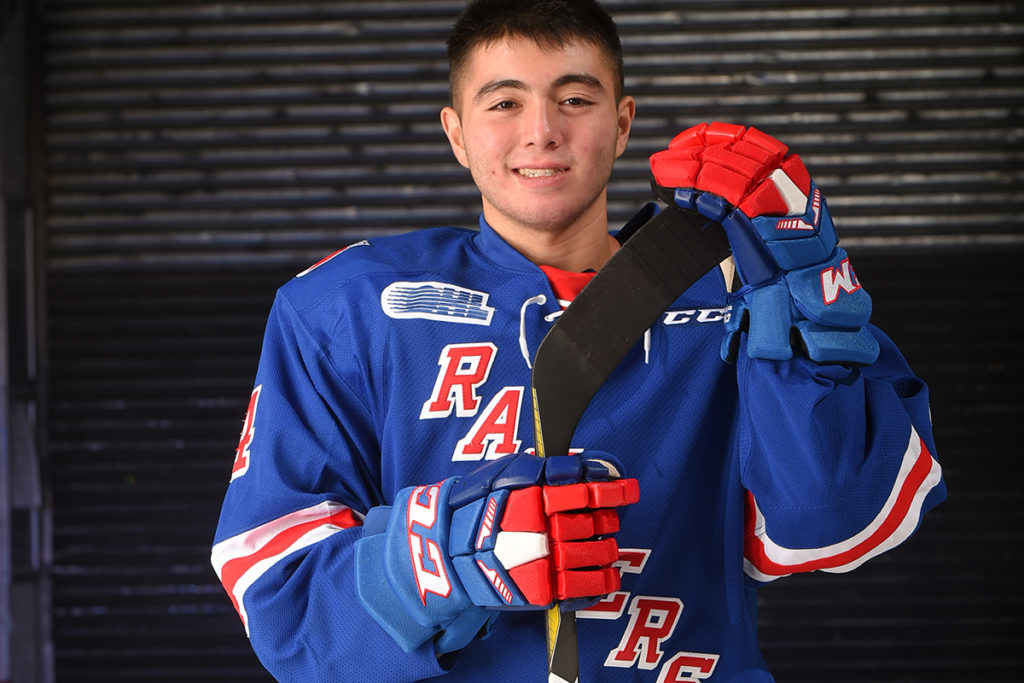 For a smaller guy, Joseph Garreffa sure knows how to make a big impression.

The ferocious fan favourite put up a five-point performance – a goal and four assists – to lead the Kitchener Rangers to a 7-5 win over the Niagara IceDogs in front of 602 fans in exhibition action on Friday night at Beamsville Arena.

Not to be overlooked was second-year rearguard Giovanni Vallati, who notched a trio of assists in the penalty-filled affair. A total of 15 power play opportunities were awarded between the two teams, as the game included five goals with the man advantage, as well as a penalty shot in the opening period.

And for the second straight game there was also a reunion of former teammates. Wednesday night the Rangers got their first look at forward Jacob Cascagnette in a Steelheads uniform; tonight, Elijah Roberts donning the red, white and black of the IceDogs.

Roberts would finish the game with a goal and assist against his former club before heading back to his former home on East Ave. in short order tomorrow afternoon when the two “interleague” opponents meet again for a 2pm matinee. The Saturday afternoon tilt will close out both team’s exhibition schedules.

Luke Richardson returned to the Rangers during their game Wednesday after a stint at camp with the Boston Bruins and got the start in goal on Friday. He earned the win after turning aside 22 shots on goal.

His counterpart, Stephen Dhillon, took the loss for the IceDogs, surrendering six goals on 31 shots.

After nearly 18 minutes of scoreless hockey the first goal came by way of the penalty shot, as Ondrej Machala was hooked before giving the IceDogs a 1-0 lead on the subsequent opportunity at 17:58 of the opening frame.

Although there was just 2:02 left on the clock the first period scoring was far from finished, as the IceDogs would extend their lead to 2-0 just 17 seconds later when Ian Martin scored his first of the preseason, unassisted, at 18:15.

But before the period was out the Rangers responded with a goal by Kyle Gentles just 25 seconds following the marker by Martin to cap off a flurry of scoring, cutting the Niagara lead to 2-1. Garreffa picked up the lone assist on the goal by Kitchener, who led 10-6 in shots through the first 20 minutes of play.

The Rangers got off to a quick start in the second period, as Dylan Seitz tied the game in the opening minute, 2-2, just 48 seconds into the frame. Garreffa again tallied the single helper on the goal.

The third of four straight Rangers goals came off the stick of Cole Carter, his third of the preseason, from Eric Guest on the power play to give Kitchener its first lead of the night, 3-2, at 10:49.

With 21 seconds left during a 5-on-3 man advantage Guest would extend the Rangers lead to 4-2, the second straight power play capitalized on by Kitchener, from Vallati and Garreffa at 10:49.

The IceDogs answered with a power play goal of their own before the period was out as Machala notched his second goal of the game at 18:32 from Johnathon Schaefer and Kyle Langdon to round out second period scoring with the Rangers maintaining a 4-3 lead.

Near the midway point of the final frame the IceDogs would once again make it a tie game, however, as Danial Singer registered his first goal of the preseason at the tail end of a Rangers penalty to make it 4-4 from Roberts and sophomore Akil Thomas.

Garreffa’s fourth point of the night proved to give the Rangers a lead they wouldn’t relinquish, as his first goal of exhibition play put Kitchener up 5-4 at 14:38. Vallati and Swede Rickard Hugg picked up the helpers.

Greg Meireles, fresh off of his experience at camp with the St. Louis Blues, chipped in with the ever-important game winner in his return. With the IceDogs penalized for slashing, Meireles registered the third power play goal of the night for the visitors, giving the Blueshirts a 6-4 lead at 16:57 from Vallati and Garreffa.

Roberts found the scoresheet against his former team with just 1:11 left on the clock to make things interesting, 6-5, from Zach Shankar and Machala but with their goaltender pulled in favour of an extra attacker the IceDogs surrendered the dagger to Riley Damiani. His empty net marker, assisted by Nick McHugh, would secure the 7-5 win.

The Rangers would finish the whistle-blowing affair 3-for-9 on the power play, while the IceDogs were 2-for-6 with the man advantage.

Kitchener’s final exhibition game of the preseason takes place tomorrow, Saturday, September 16th at 2pm. Prior to the game the team will host its annual Fan Fest and Barbecue supporting Children’s Wish at 11am. Carnival rides, a dunk tank, a team autograph session and, of course, a barbecue will all be a part of the special event which takes place in Parking Lot “A” of The Aud. Admission to the Fan Fest and Barbecue is free for all fans, while tickets will be sold at the door to the game for $5 each, or $15 for a family of four. More details can be found here.

The Rangers open their 2017-18 regular season schedule with their home opener on Friday, September 22nd as they play host to the Flint Firebirds at 7:30pm.