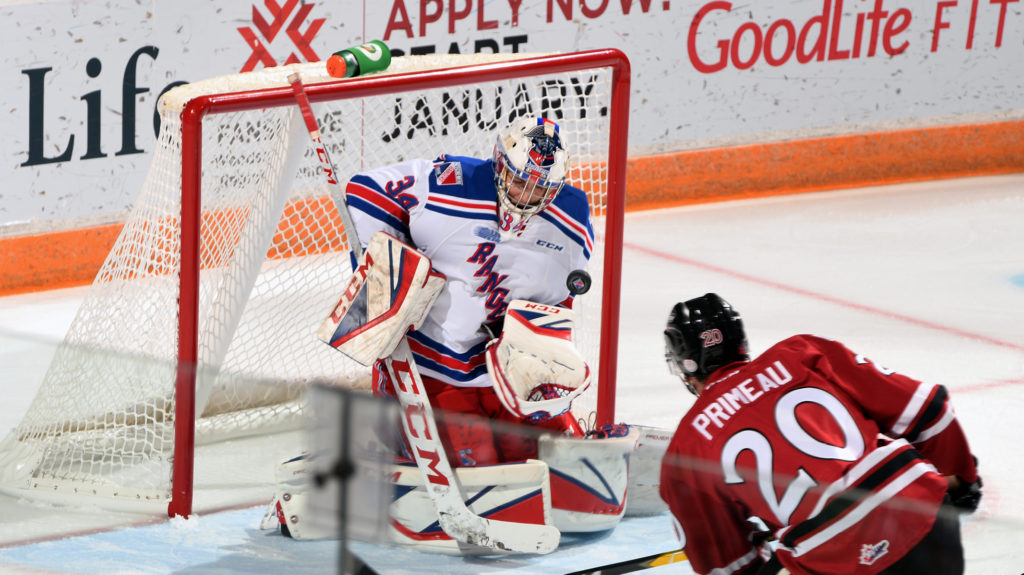 Kitchener, ON: It was a chippy night as the Highway 7 rivals, Guelph Storm, visited the Rangers in a Friday night tilt at The Aud.

This was a powerhouse performance by the Rangers who cruised to a 5-0 win over the Storm on the back of a first star, shutout performance by Luke Richardson.

Joseph Garreffa and Rickard Hugg added to their point total on the season with 14, while Eric Guest and Lipanov scored their first of the season, and for Lipanov, his first as a Ranger.

A few fights and misconducts later and the Rangers take over sole possession of first place in the midwest division over the Storm.

The Rangers had a good opening to the game and managed to keep a few quality chances by the Storm from turning into goals. Both team’s goaltenders looked strong in net to start the game.

Aggressive play from the Rangers led to the storm taking three-straight penalties midway through the period.

Kitchener came into the game ranked number four in the OHL on the powerplay and by the third Guelph penalty, Greg Meireles wristed home his fifth of the season on assists from Jack York and Michael Vukojevic.

The OHL’s best powerplay, the Guelph Storm, had an opportunity to round out the period with a goal and despite having numerous chances, the Rangers went into the first intermission ahead 1-0.

The Rangers rode their first period momentum into the second and Mike Petizian picked up his first goal of the season with the assists from Justin MacPherson and Nick McHugh. That put Kitchener up 2-0.

As is custom with the divisional rivalry, fast play turned into hard play and that turned into a scrum behind the Guelph net. All in all, Meireles and Ryan Merkley received 10-minute misconducts while Isaac Ratcliffe and Jack Hanley both picked up minor penalties.

On the 5-on-3 powerplay, after a flurry of chances, team co-point leader Hugg buried his seventh goal of the season and that put the Rangers up 3-0 at 15:44.

Not to be outdone, Kitchener’s penalty kill remained dominant late in the period after a Petizian holding the stick penalty and that kept the lead safe at three.

The second period ended with Rangers up 21-20 in shots.

The third period was more of the same both on the scoreboard and in the extracurriculars with Guelph’s Isaac Ratcliffe getting a misconduct penalty that saw him leave the game while Mark Woolley and Vukojevic dropped their gloves and received five minute majors.

Luke Richardson picked up 31 saves in his first shoutout of the season and was named the game’s first star. Garreffa and Meireles were the third and second star respectively.

The Rangers return to action tomorrow against the Knights at 3:30 pm. The Rangers play again at home on Friday, October 26 to take on the Sault Ste. Marie Greyhounds. The puck drops at 7:30 pm.