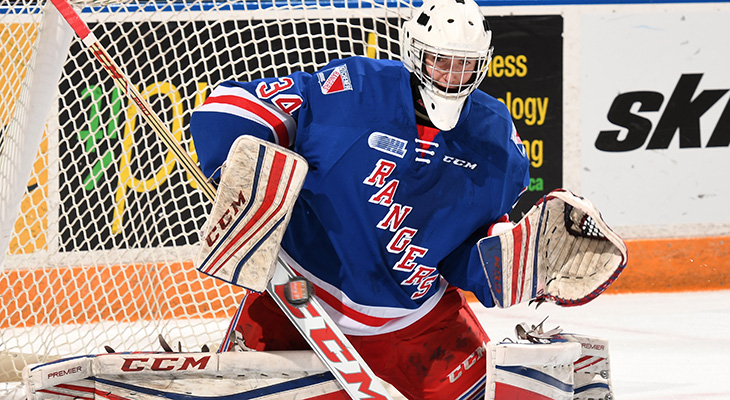 It seems all the Kitchener Rangers needed to snap a four-game winless streak was a little bit of ‘home-cooking’.

Joseph Garreffa and Darby Llewellyn each had two-goal performances while Luke Richardson was solid in goal as the Rangers (23-14-2-2) defeated the visiting Barrie Colts (12-23-3-1), 5-3, in front of 7,203 fans at the Kitchener Memorial Auditorium on Friday night.

Richardson – a Barrie native – turned aside 31 of 34 Colts’ shots strewn his way, and remains undefeated on the season improving to 3-0-0-0.

Christian Propp (4-11-1-0) suffered the loss in goal for the visitors, surrendering five goals on 38 Kitchener shots.

Garreffa and Llewellyn weren’t the only Blueshirts with their offensive juices flowing, as Cedric Schiemenz reignited his scoring touch with the game-winning goal and an assist. Adam Mascherin continued his consistent play with a three-assist game to help guide the home team to vistory.

A shorthanded goal by Llewellyn opened the scoring, giving the Rangers a 1-0 lead just 2:47 into the first period. It was Llewellyn’s 11th of the season, with the lone assist to Jake Henderson.

The Rangers went up 2-0 when Llewellyn tallied his second of the night, a highlight reel effort assisted by Cole Carter and Elijah Roberts at 8:42.

The Colts got themselves on the board less than two minutes later, as Lucas Chiodo notched his 14th of the season, from Tyler Tucker, at 10:13.

Barrie potted the equalizer with less than five minutes to play in the period when Anthony Stefano regained a tie with Chiodo for the team-lead in goals with his 14th of the season, from Chiodo and Ben Hawerchuk, at 15:29.

Shots on goal after the first period of play were 12-12.

Garreffa’s goal at 10:39 of the second period wound up being the lone goal of the frame, giving the Rangers a 3-2 lead with the single assist to Mascherin.

Second period shots on goal were 16-9 Kitchener for a two-period total of 28-21 for the home side.

Approaching the midway point of the third period Schiemenz snapped a 16-game goalless skid with his 2nd of the season, from Dylan Di Perna and Mascherin, to put the Rangers up 4-2 at 7:48.

The Colts would again creep to within one, however, as Giordano Finoro notched an unassisted marker at 9:27 to make it a 4-3 game.

Garreffa’s second of the game and 15th of the season with 1:23 to play would make it 5-3 and seal the win for the Rangers. Schiemenz and Mascherin earned the assists on the power play goal.

The Colts outshot the Rangers in the third period 13-10, but it was Kitchener who had the edge in shots after 60 minutes, 38-34.

Kitchener would finish 1-for-5 on the power play, while Barrie was 0-for-4 with the man advantage.

Giordano Finoro (BAR) (3), Adam Mascherin (KIT) (2) and Darby Llewellyn (KIT) (1) were selected as the Three Stars of the Game.

The Rangers wrap up the weekend on Sunday, also at home, when they host the Erie Otters at the Aud at 2pm.