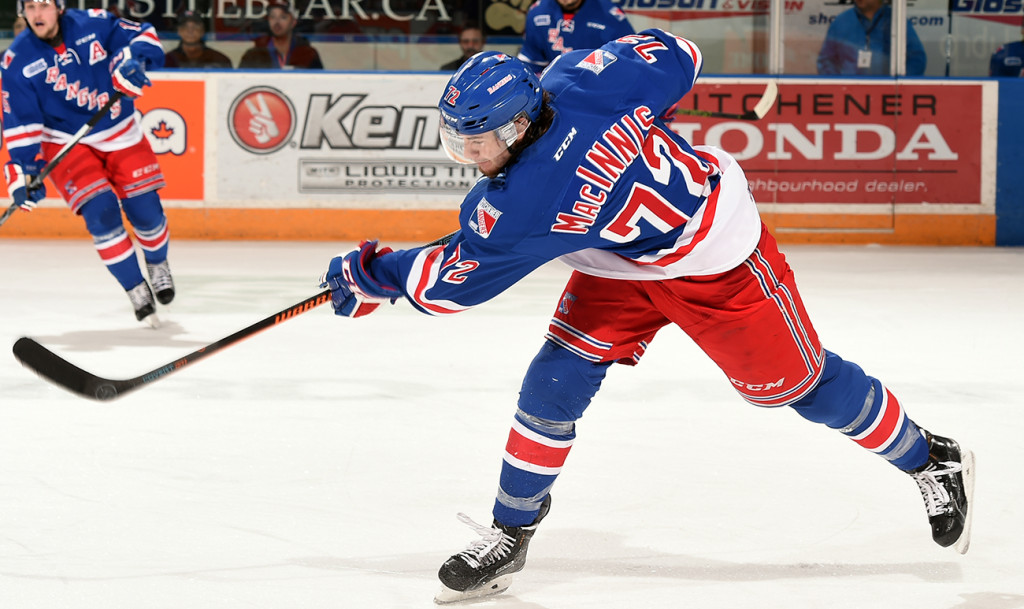 When it comes to scoring game-winning goals, that’s right in the captain’s wheelhouse.

Ryan MacInnis scored his ninth game-winning goal of the season – and second overtime winner of the campaign – as the Kitchener Rangers defeated the Owen Sound Attack 3-2 in front of 7,242 fans at the Kitchener Memorial Auditorium Complex on Friday night.

The win snaps a four game winless skid (0-3-0-1) for the Rangers (41-15-5-2), and clinches home ice advantage for the Rangers through the first round of the OHL playoffs.

It was the fourth time this season in seven games that the Attack (30-23-8-3) and Rangers have forced overtime, with the Rangers now leading the season series 5-1-1-0. The final meeting between the two clubs is the final game of the regular season for each team, Saturday, March 19th at the Harry Lumley Bayshore Community Centre at 7:30pm.

Daniel Dekoning took the loss in goal for the Attack, allowing three goals on 31 shots while seeing his record dip to 10-6-1-0.

After a scoreless first period which saw the Rangers outshoot the Attack 9-4, it was Owen Sound that would open the scoring just 1:32 into the second period. Nick Suzuki gave the Attack the 1-0 lead after overager Bryson Cianfrone forced a turnover deep in the Rangers zone, feeding Suzuki for his 18th goal of the season.

The Rangers would tie the game just over three minutes later when Nick Magyar tallied his tenth goal of the season, burying the rebound on an Elijah Roberts point-shot. Jacob Cascagnette picked up the second assist on the goal, which came at 4:37.

Kitchener would take the lead after Dekoning came out to play the puck behind his net, but lost the battle to Connor Bunnaman. Bunnaman would find Gustaf Franzen near the edge of the circle, who then buried the puck into a near-empty net before Dekoning could reposition, at the 7:17 mark of the period.

The Rangers would take the 2-1 lead into the second intermission, as well as a 20-16 lead on the shot clock after 40 minutes.

Petrus Palmu made it a tie game once again at 7:38 of the third period, with the lone assist going to Ethan Szypula, which would eventually force the game into overtime.

MacInnis would tally the winner at 2:22 of the three-on-three OT, with David Miller and Adam Mascherin collecting the assists.

Shots were 12-6 Owen Sound in the third period of play, and 5-1 Kitchener in overtime.

Each team would finish 0-for-2 on the power play.

Petrus Palmu (3), Dawson Carty (2) and Ryan MacInnis (1) were chosen as the Three Stars of the Game.

The Rangers continue their three-game weekend tomorrow, Saturday, March 12th when they travel to Flint to take on the Firebirds for a 7:30pm start. They wrap up the weekend in Sault Ste. Marie for a 2:07pm matinee vs. the Greyhounds on Sunday, March 13th.

Tickets are also still available for the Rangers final home game of the regular season, the Fan Appreciation Game, next Friday, March 18th vs. the Sarnia Sting at 7:30pm.