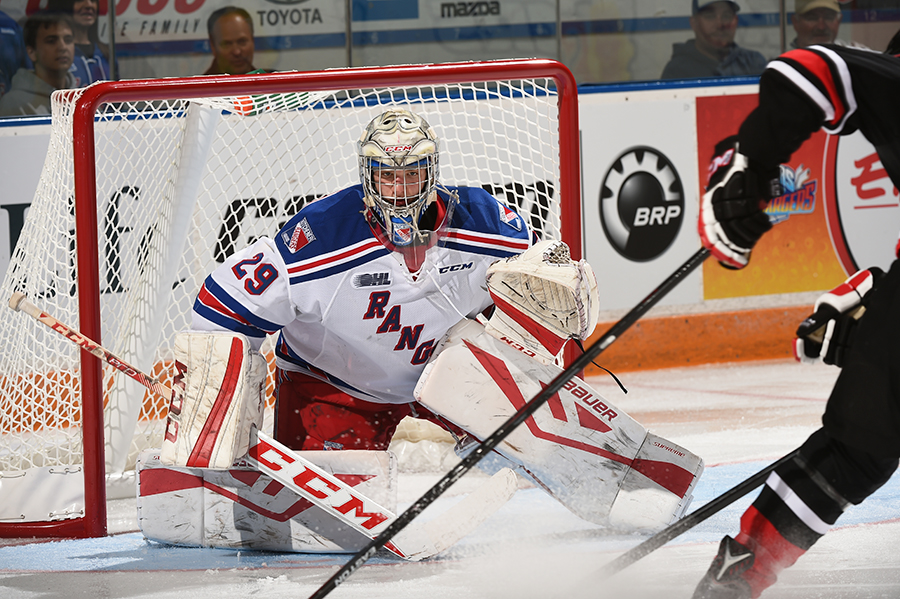 If taking on the top team in the opposing conference is considered a good test for a hockey club, then the Kitchener Rangers passed with flying colours on Friday night.

The Rangers got goal production from three different lines and some stand-up goaltending from starter Luke Opilka as they skated away with a 3-1 victory over the Ottawa 67’s in front of 3,022 fans at TD Place.

Mike Davies, Ryan MacInnis and Mason Kohn each registered goals for the Rangers, who improve to 13-0-3-0 on the season and 7-0-1-0 on the road, en route to their eleventh straight win. The 67’s, who came into tonight with the best record in the Eastern Conference, dipped to 10-7-1-0 and saw a modest two game win streak come to a halt.

Opilka was about as sharp in goal tonight as he has been all season for Kitchener, often frustrating the 67’s squad throughout his 22 save performance. Leo Lazarev was dealt the loss in goal for Ottawa, giving up three goals on 24 shots he faced.

The Rangers also saw a pair of welcome additions to their lineup as both Adam Mascherin and Nick McHugh returned from injuries. Both players made an immediate impact, picking up an assist apiece in the win.

As the old saying goes, “practice makes perfect”. While the last thing you’ll ever hear head coach Mike Van Ryn call his team is perfect, he unequivocally attributes the fact that his club has now scored the first goal in 15 of 16 games this season to one important thing – practice.

“We managed to score first again tonight, and I’m proud of my guys. I know people might think I talk a lot about practice, but I honestly believe that’s where all this success comes from. I truly believe practice translates into how you play in games.

“I think we’ve been able to start better every night because we start our practices better [this season]. That’s a bit of the mentality we’re trying to set with these guys. Every day, every practice, every shift – you gotta be ready to go. I think they’re buying into that.”

In a season where the Rangers have had to battle the adversity of multiple injuries early on, they’ve managed not only to get steady goaltending, but balanced scoring as well. Davies was just happy to chip in and do his part tonight, while picking up his first goal of the season.

“We aren’t too fancy of a team, but we’ve got a lot of guys in that room that work their tails off every night, so we owe it to one another to compete. We worked hard tonight and it was a fun atmosphere to play in.”

The win maintains an unblemished record in regulation for the Rangers, and Davies feels that after a pair of seasons which saw his team struggle, they’ve finally become a club that other teams take seriously.

“We’ve finally earned our respect. We’ve been trying to work for that for a while now. We’re stringing together a couple wins here and we couldn’t be happier with everyone doing their part and chipping in. It’s not just one line scoring, we’ve got all lines going here and hopefully we can follow that up tomorrow in Kingston.”

Blueliner Frank Hora, who was tied for a team best plus-2 on the night, echoed the sentiments of his teammate.

“It was nice to get a big win on the road and nice to beat the top team in the east. I think we’re getting the message across [that we’re a top team] and as long as we keep working hard, the results will keep coming.”

It was Davies who opened the scoring, unassisted, at 9:19 of the first period. The 67’s would hit three posts inside the last two minutes of the period, but they would fail to score, as the Rangers took a 1-0 lead into the first intermission. Shots were 11-7 in favour of Kitchener in the opening frame.

Stepan Falkovsky got the 67’s on the board with a deflection that alluded Opilka at 16:55. Travis Konecny and Dante Salituro picked up the assists, cutting the Kitchener lead to 3-1, but the Rangers staved off any further Ottawa offence. Shots on goal were 19-19 through two periods, and ended 24-23 in Kitchener’s favour.

The power play played no factor for either team, as both the Rangers and the 67’s finished 0-for-2 with the man advantage.

MacInnis, Hora and Brian Brosnan each wore ‘A’s and skated as assistant captains for the game.

The Rangers continue their eastern swing tomorrow night when they take on the Kingston Frontenacs on Saturday, October 7th at 7pm. Kitchener’s next home game is Tuesday, November 10th when they host their annual Remembrance Day game versus the Sarnia Sting at 7pm. The Rangers will be wearing commemorative Remembrance Day jerseys which will be silent-auctioned from 5:30pm until ten minutes following the end of game in the Subscribers Lounge in the Kitchener Memorial Auditorium Complex.