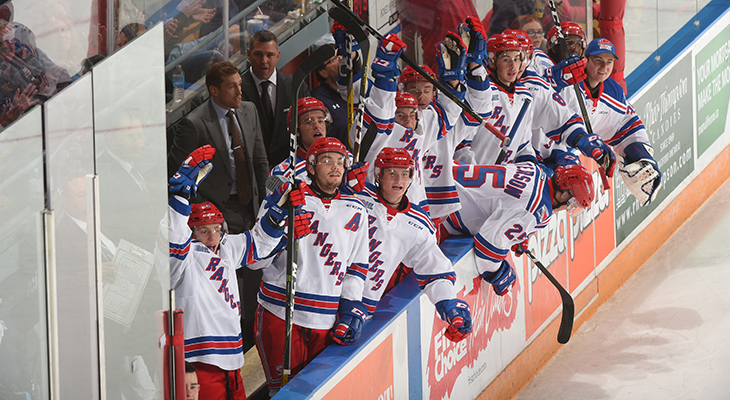 The Kitchener Rangers utilized five unanswered goals to propel themselves to a 6-3 come-from-behind victory over the host North Bay Battalion in front of 2,564 fans at the North Bay Memorial Gardens in Ontario Hockey League action on Friday night.

Six different goal scorers got on the board for Kitchener who improves to 2-0-0-0 on the season, while the Battalion saw their record drop to 0-2-0-0.

While the Rangers grew better with age over the course of the game’s 60 minutes, their victory was in large part due to their youth, as four of their six goal scorers were 18-year-old or younger.

Eric Guest and Riley Damiani each scored their first career OHL goals, while Jacob Cascagnette (1G, 1A) and Jake Henderson (1G, 1A) also scored their firsts of the 2016-17 campaign. Nick McHugh and Connor Bunnaman also chipped in with goals for the Blueshirts, while Darby Llewellyn and Greg Meireles each notched two assists in the win.

Dawson Carty earned his second win of the season coming up big for the Rangers – especially in the early going – turning aside 22 of 25 shots he faced. Brent Moran (0-2-0-0) took the loss, allowing six goals on 27 shots.

For the second straight game the Rangers surrendered the game’s opening goal, and found themselves facing a 2-1 deficit after the opening frame. They were down 3-1 just over a minute into the second period before the flood gates opened, as Kitchener scored three times in a span of 5:50 in the second to take a 4-3 lead, then added two more goals in the third for five unanswered makers en route to their first road win of the season.

Rangers head coach Jay McKee told 570 News post-game that while the first period didn’t unfold how the team would have liked, he was happy with the way his team responded in the following forty minutes.

“I don’t think anyone was happy with our first period,” said McKee. “It took us eleven minutes to get a shot on goal. It’s not ideal, but we chalked that up to bus legs and looked better in the second, then took over in the third. Moving forward we’ll look to be better in the first.”

The Battalion opened the scoring on a goal by Steve Harland, his first of the season, at 7:21 assisted by Adam McMaster and Maurizio Colella.

The Rangers would take advantage of their first man advantage of the night when Bunnaman made it a 1-1 game on the power play, from Adam Mascherin and Meireles, at 13:03.

The Battalion would regain the lead with a power play marker of their own before the first period was out, as Brady Lyle tallied his first of the season from Daniil Vertiy and Justin Brazeau, at 16:14.

Shots were 8-7 in the first period in favour of North Bay.

The Battalion capitalized early in the second, taking a 3-1 lead just 1:01 into the middle frame on a goal by Colella, who finished off a stretch pass from Harland with Zach Shankar picking up the second assist.

As seems to be his specialty, McHugh yet again made the most of a breakaway attempt of his own as the second year sophomore cut the North Bay lead to 3-2 at 7:53 of the second, with Meireles earning his second assist of the night.

Guest’s first career OHL goal tied the game 3-3, a persistent effort down low to the side of Moran at 11:07, assisted by Elijah Roberts. The Rangers then took their first lead of the night on their third straight goal of the period on the stick of Damiani, assisted by Llewellyn to make it 4-3 Kitchener at 13:43.

The Rangers took the lead not only on the scoreboard but on the shot clock, as Kitchener outshot North Bay 14-9 in the middle frame, and 21-17 after 40 minutes.

Cascagnette tallied his first of the season to give the Rangers a 5-3 lead, assisted by Henderson, at 10:11, then Henderson potted one of his own just under four minutes later, assisted by Cascagnette and Llewellyn, to secure the 6-3 win.

The Rangers would finish 1-for-4 on the power play, while the Battalion would go 1-for-5 with the man advantage.

Llewellyn, Mascherin, and Dylan Di Perna each wore “A’s” and skated as alternate captains for the Rangers.

The Rangers finish off their northern swing on Sunday when they face the Sudbury Wolves at 2pm. They return home to the Aud to host the Sarnia Sting on Friday, October 7 at 7:30pm.