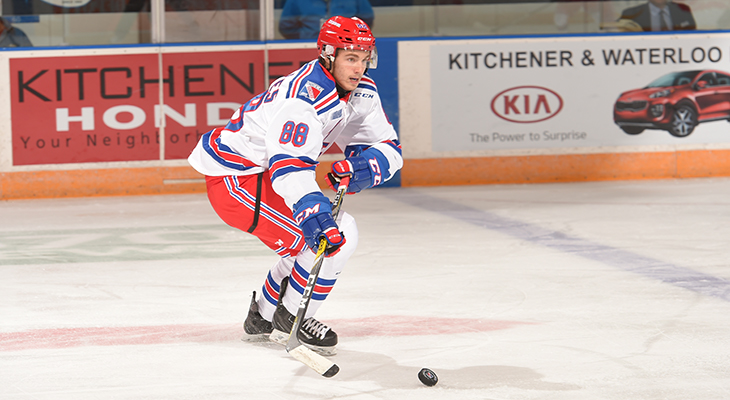 Rangers fans have been waiting a long time for Greg Meireles to become a Rangers regular, and Friday night was exactly what they were waiting for.

The 17-year-old winger tallied a three point night as the Kitchener Rangers propelled themselves to a 4-2 win over the Flint Firebirds in front of 7,105 fans at the Kitchener Memorial Auditorium Complex on Friday night in the team’s home and season opener.

With the Rangers trailing 1-0 after one, the game was deadlocked 2-2 through 40 minutes with the home side mustering just nine shots on goal through the first 40 minutes. It was with just over six minutes to play that Meireles potted the game winner, before setting up defenceman Elijah Roberts for the insurance goal to give the team its first win (1-0-0-0) of the season.

Sophomore Nick McHugh was also impressive, scoring the Rangers first goal of the 2016-17 season and adding an assist, finishing a +2.

Penalties dictated much of the game’s pace, as 12 special teams chances were delved out throughout the game amounting in a shorthanded goal and a pair of power play goals combined between the two teams.

The Firebirds opened the scoring after capitalizing on an odd-man rush, as Ty Dellandrea made it 1-0 from Ryan Moore and Nicholas Caamano at the 3:41 mark of the first period. Shots were 5-4 Flint after the first period of play.

The Rangers couldn’t quite make the bounces go their way in the early half of the second period, managing just one shot on goal through the first ten minutes. Fortunes seemed to take a turn for the worse when defenceman Kyle Gentles was dealt a double-minor for high-sticking at 10:11.

Just seconds later, though, it was Nick McHugh who finally got the Rangers on the board with a shorthanded goal, from Meireles and Roberts, at 10:18 of the period.

Momentum certainly seemed to shift following the 1-1 goal, as Carty absolutely robbed a Flint forward in tight with a stellar glove save at 13:15.

Just under four minutes later the Rangers took the lead, as Gentles scored his first OHL goal on a nice rebound from an initial Jake Henderson shot, putting the home side up 2-1 at 16:56. Joseph Garreffa earned his first point of the season with the second assist on the goal.

Penalty trouble followed the Blueshirts near the tail end of the period, as Kitchener found themselves down a pair of men with time winding down. Mathieu Henderson would even things up for the Firebirds in the final minute of the period, 2-2, at 19:08 with Caamano notching the lone assist.

In the third period with the Rangers on the power play, Meireles finished off a pretty pass from Cedric Schiemenz in the slot to give the home team back the lead, 3-2, at 13:26 with the second assist to Mason Kohn.

The insurance goal came just under a minute later, as Roberts finished off a pass from Meireles and McHugh to cap off the 4-2 win.

The Firebirds outshot the Rangers 20-9 through 40 minutes, and 30-17 through regulation.

Flint was 1-for-7 on the power play, while Kitchener was 1-for-5 with the man advantage.

Kohn, Jacob Cascagnette and Dylan Di Perna each wore “A’s” and skated as alternate captains for the Rangers.

The Rangers return to action a week from tonight, Friday, September 30 when they venture to North Bay to take on the Battalion for a 7pm start. Their travels continue when they wrap up the weekend in the Nickel City vs. the Wolves in Sudbury for a 2pm puck drop.

Their next home game is two weeks from tonight, Friday, October 2 when they host the Sarnia Sting at 7:30pm.

Regular season tickets are $22.50 each for adults, $18.50 for children 12 and under, including HST and are available now at the Kitchener Memorial Auditorium Box Office, Centre in the Square, and online.