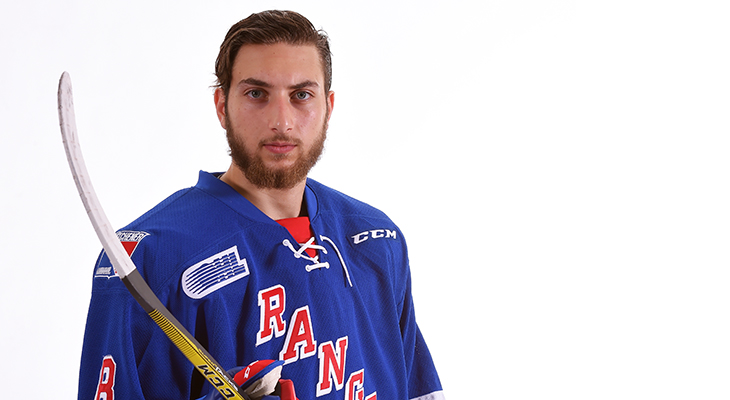 The busy week continued to go to plan for the Kitchener Rangers on Thursday night in St. Catharines.

Cedric Schiemenz scored his third goal of the season which proved to be the eventual game winner in the second period, while Adam Mascherin with this 34th and Cole Carter (13th) were the other goal scorers for the Rangers. Kitchener sweeps the season series versus the IceDogs which included a 4-3 overtime win on February 7th at the Aud.

Luke Richardson (9-2-0-0) had another cool, impressive performance in goal for the Blueshirts, picking up his third consecutive victory allowing just one goal in the first period, turning aside 31 of 32 shots strewn his way.

Stephen Dhillon (18-24-4-4) suffered the loss in goal for the hosts despite being called upon to face 44 Rangers’ shots, stopping 40.

It was the IceDogs who opened the scoring, as Johnny Corneil capitalized on a Ben Jones rebound to beat Richardson to give Niagara a 1-0 lead at 11:05, a power play goal with the second assist to Akil Thomas.

The Rangers would square things up just two minutes later with a power play goal of their own, as Di Perna scored in his second straight game with a beautiful individual effort after fighting off three IceDogs skaters. His ninth goal of the season came unassisted at the 13:06 mark of the first period after the veteran cashed in near the bottom of the circle, to the right of Dhillon.

The game would head to the first intermission with the two teams deadlocked in the 1-1 tie; the Rangers outshooting the IceDogs, 14-11.

Schiemenz gave Kitchener its first lead of the night in the second period, as the winger tallied his third of the season for family visiting from his home of Germany to make it 2-1, from Dylan Seitz and Di Perna, at 4:05.

Mascherin extended the Rangers’ lead to 3-1 just past the midway point of the middle frame and did so in true Mascherin-like fashion, releasing a powerful wrister for his 34th of the season at 10:26 with the assists to Joseph Garreffa and Giovanni Vallati.

Second period shots on goal were 15-9 Rangers for a two-period total of 29-10, Kitchener.

The lone goal of the third period came off the stick of Carter, his third with the Rangers and 13th of the season, giving Kitchener the 4-1 lead, from Nick McHugh and Greg Meireles at 13:05.

Kitchener was 1-for-3 on the power play, while Niagara was 1-for-2 with the man advantage.

Di Perna, Jake Henderson and Darby Llewellyn each wore an “A” and skated as alternates to Rangers’ captain Frank Hora.