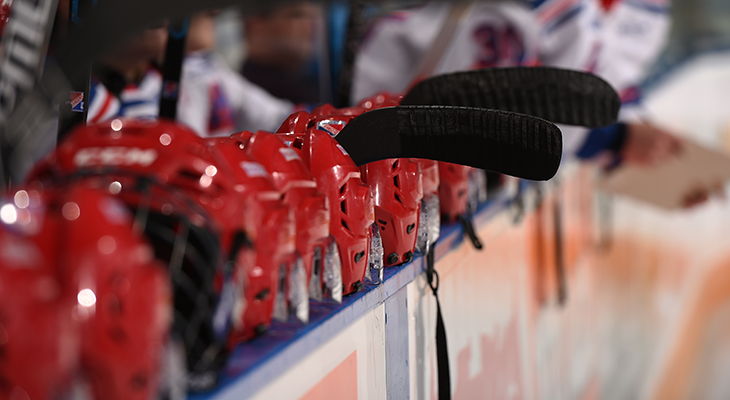 The 2016-17 campaign came to an end for the Kitchener Rangers on Friday night after falling to the Owen Sound Attack, 6-2, in front of a sell-out crowd of 3,187 Attack and Rangers fans at the Harry Lumley Bayshore Community Centre in Game 5.

The Attack win the best-of-seven opening round playoff series, 4-1, and will now go on to face the Sault Ste. Marie Greyhounds in the second round. For the Rangers and their fans, the countdown begins now to puck drop on the 2017-18 season in September; with the exception of three classy, young men who won’t return, but left an undeniable mark during their time as Rangers as well as throughout their entire Ontario Hockey League careers.

Game 5 marked the final junior game for overagers Dylan Di Perna and Darby Llewellyn. Rangers’ captain Frank Hora missed the final two games of the series due to injury and also sees his OHL career come to an end. After the final buzzer of the season ending game, each reflected on their time as a Blueshirt with 570 News.

“I was fortunate enough to come here at 16-years-old and it’s been a ride. I wouldn’t change it for anything. I’ve been lucky enough to play here all five years of my career and I wouldn’t have it any other way,” said Ann Arbor, MI native Darby Llewellyn.

“It’s tough to not be out there playing,” said Rangers’ captain and Cheektowaga, NY native Frank Hora. “These last couple games sitting in the stands, it was hard. I hate watching. I’d much rather be out there helping the team win, but I’m proud of the season we had. We should be sure to keep our heads up. My time in Kitchener was the best experience of my life. I’ve met a lot of great people, played for a lot of great coaches; it was just an honour to play here in Kitchener. I was able to live my dream here and I’ll cherish that for the rest of my life.”

“This is a pro organization,” said Woodbridge, ON native Dylan Di Perna. “A lot of guys dream of being able to play home games at the Auditorium and I’ve been fortunate enough to be able to experience that over the past four years. [The timeout called by head coach Jay McKee with 19 seconds to play] was nice. To be able to soak in that moment and share it with some of my best buddies was definitely a moment to remember.”

The Rangers managed to jump out to a 1-0 lead less than 30 seconds into the game, but it was the Attack who would score the following five goals – including three in the second period – which all but sealed the fate for the ill-ridden Rangers’ season.

Luke Opilka once again saw a number of Attack shots, but nowhere near the 70 he faced on Wednesday night at the Aud in Game 4. The netminder turned aside 32 shots on 38 attempts by the hosts.

Connor Bunnaman scored his third goal of the series just 24 seconds after puck drop to give the Rangers a 1-0 lead, with the assists to Llewellyn and Giovanni Vallati.

On the Attack’s first power play opportunity of the night they capitalized, as Ethan Szpula made it a 1-1 game at 6:58, assisted by Maksim Sushko and Sean Durzi.

With just under five minutes to play in the frame Owen Sound would take the lead, as Santino Centorame’s third goal of the postseason made it 2-1 for the hosts, with Nick Suzuki picking up the lone assist at 15:01.

First period shots on goal favoured the Attack by a 15-8 margin.

As the game approached the midway point the Attack once again etched the scoresheet in a special teams situation; this time shorthanded. Petrus Palmu drove to the Rangers’ net with Joseph Garreffa attempting to man him off the puck, and Opilka was bumped into the Kitchener goal as the puck crossed the line. After a lengthy review it was determined there was no goaltender interference and the Attack took a 3-1 lead courtesy of Palmu, unassisted at 7:04.

Owen Sound then went 2-for-2 on the man advantage at 13:57 as Suzuki scored his fourth of the postseason, from Kevin Hancock and Palmu, to make it 4-1.

Just 35 seconds later they added to their lead on a goal by Matthew Struthers, unassisted, at 14:32 to round out second period scoring.

Bunnaman tallied his second of the night under two minutes into the third period to cut the Attack lead to 5-2. The power play goal was assisted by Adam Mascherin and Garreffa at 1:51.

Owen Sound regained its three-goal lead as Kevin Hancock tallied his fourth of the postseason at 8:15 from Palmu and Centorame to round out the game’s scoring.

Kitchener was 1-for-6 on the power play, while Owen Sound was 3-for-4 with the man advantage while adding one shorthanded.

Darby Llewellyn and Jake Henderson each wore an “A” and skated as alternate captains for the Rangers. Dylan Di Perna wore the “C” in the absence of Frank Hora.

The Rangers’ end of season Awards Ceremony will take place in the Dom Cardillo Arena of the Kitchener Memorial Auditorium on Monday, April 3rd with an autograph session at 6pm followed by the award presentations beginning at 7pm. For more details, visit kitchenerrangers.com.