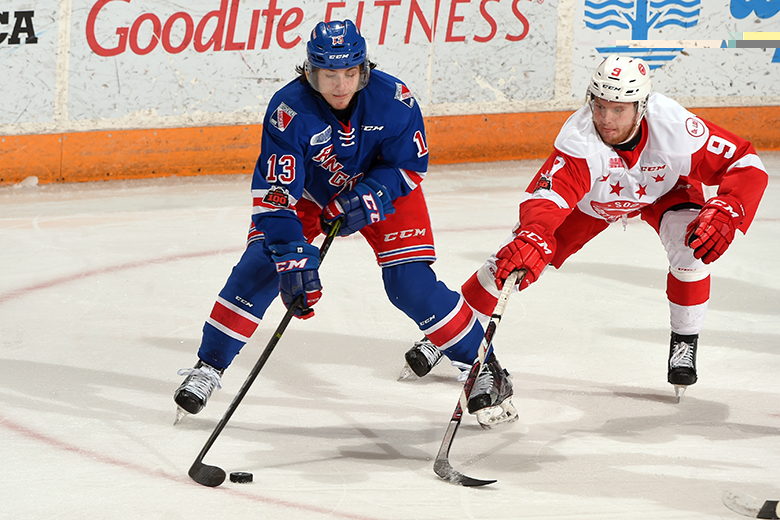 From anxious moments and nervous tension, to last minute jubilation and heartbreak; Game 7 of the Western Conference Final had it all, which makes deciding games that much more compelling and entertaining.

The only thing the Kitchener Rangers and their fans wish they could change about that thrilling Game 7 was the outcome.

Jack Kopacka scored his ninth goal of the playoffs at the 4:00 minute mark of double overtime to crown the Sault Ste. Marie Greyhounds as OHL Western Conference Champions with a 4-3 win in front of 4,859 fans at the Essar Centre on Monday night.

The game was in stark contrast to the previous Game 7 in which the Soo partook, which saw them defeat the Owen Sound Attack 9-7 for the right to meet the Rangers in the conference final. This game was tight checking, defensively sound, and about as closely contested a series deciding game that’s been seen in some time.

The Greyhounds jumped out to a late first period lead, but the Rangers tied the game just over a couple of minutes into the middle frame. Three times on the night the Hounds would take the lead, only to have the Blueshirts battle back to tie the game.

A power play goal with 8:19 to play in the third period gave the Greyhounds a 3-2 lead and sent the home team fans into a frenzy, as they believed Morgan Frost’s seventh of the playoffs would prove to clinch the series, but more dramatics were to come.

Logan Stanley – who over the course of the 84 minutes of Game 7 played what felt like north of 70 minutes, seemingly never leaving the ice – sailed a blast from the point with just 51.8 seconds remaining in regulation to beat Soo goaltender Matthew Villalta, tying the game 3-3 and keeping the Rangers playoff hopes alive.

The first overtime frame saw the Hounds outshoot the Rangers 11-8, but the Blueshirts had a high number of offensive chances to put the game away, falling just short.

The Rangers were dealt their fair share of blows to their lineup in the playoffs having the likes of defencemen Connor Hall, Austin McEneny and forward Givani Smith on the shelf, but the remainder of the team stepped up in a big way; getting big-game performances from top to bottom, young and old which shone a light on the depth of this year’s squad.

Monday’s game was the final OHL game for overagers Kole Sherwood and Mario Culina who, along with defenceman Austin McEneny, will now move on from the league.

Like a broken record, Culina was once again spectacular in goal for the Blueshirts, tonight turning aside 37 of 41 Greyhounds shots while earning the game’s Third Star. Villalta made 33 saves in the win.

Boris Katchouk opened the scoring for the Greyhounds with just 3:33 remaining in the opening frame, giving the home team a 1-0 lead as the game went to the first intermission.

Shots on goal after the first period of play favoured the Rangers, 6-5.

But just under three minutes into the second period Kitchener battled back to tie the game, 1-1, as Jonathan Yantsis notched his fourth of the playoffs, from Nick McHugh and Michael Vukojevic, at 2:47.

The Greyhounds reclaimed the lead at 9:01 of the second when Katchouk tallied his second of the night, making it a 2-1 game.

But again the visitors rallied to even things up as Rickard Hugg made it 2-2 on the power play, from Sherwood and Riley Damiani, at 11:40.

Shots on goal were limited through 40 minutes, leaning Kitchener’s way by a slim 15-10 margin.

Frost’s power play marker put the Soo up 3-2 at 8:19 and had fans on the edge of their seats, but Stanley’s fourth of the playoffs, from Connor Bunnaman and Logan Brown, cued the dramatics at 19:08 to tie the game, 3-3, silence the crowd, then send the game to overtime.

The first overtime of course would prove nothing, despite a number of quality chances for both sides.

Kopacka’s ninth of the postseason ended the Rangers playoff run at 4:00 of the second overtime, which gave way to series-ending handshakes.

Shots on goal were 27-26 Soo at the end of regulation, 11-8 Soo in the first overtime and 3-2 Greyhounds in the final frame.

The Rangers and Greyhounds each went 1-for-3 with the man advantage.

The Kitchener Rangers would like to thank the best fans in the Ontario Hockey League, Rangers Nation, for your cheers, support and unwavering dedication and loyalty throughout this 2017-18 season and exciting playoff run.

Counting down the days until we see you back at The Aud.