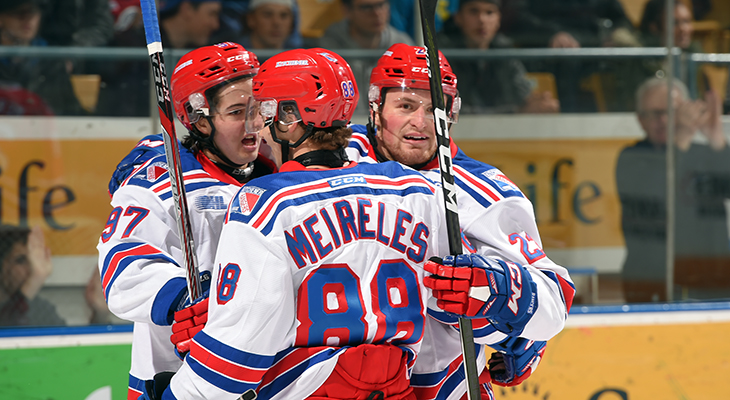 Adam Mascherin scored twice in the second period and the Kitchener Rangers staved off the top team in the Eastern Conference, coming away with a 3-2 win over the Oshawa Generals in front of 7,129 fans at the Kitchener Memorial Auditorium on Friday night.

Mascherin entered the night with points in every home game he’s played at the Aud this season, and the trend continued tonight. He now has registered nine goals and 12 assists for 21 points in ten home games.

His first goal of the night was set up by Jeremy Bracco with a nice feed from behind the Oshawa goal, extending Bracco’s season long point streak to 14 goals and 36 points in 18 games played.

Dawson Carty took the reins in the Rangers crease for the second straight night and was up to the task, needing 22 saves to improve his record to 11-4-0-1.

Dylan Seitz opened the game’s scoring for the Rangers, burying his sixth of the season at 9:48 of the first period, assisted by Kyle Gentles and Jacob Cascagnette.

It was the lone goal of the period, as the Rangers outshot the Generals through the first 20 minutes by a 12-11 margin.

The Rangers controlled much of the first seven minutes of the middle frame until Danil Antropov capitalized on a Alex Di Carlo pass from the corner, tying the game 1-1 at 7:49 with Jack Studnicka picking up the second assist.

Just under seven minutes later the Rangers would respond, as Mascherin tallied his first of the night, assisted by Bracco, to make it 2-1 Kitchener at 14:35.

Before the period was out Mascherin would add another – his 14th of the season – to put the Rangers up 3-1 at 18:47, with Joseph Garreffa picking up the lone helper. Garreffa, for the second straight night, dazzled Rangers fans with end-to-end rushes and sturdy defensive plays, enough so that he was named the game’s Second Star.

The Generals crept to within one with a quick start to the third period, as Riley Stillman cut the Rangers lead to 3-2 just 48 seconds in, from Domenic Commisso and Renars Krastenbergs. It was as close as the Gennies would come, however, as the Rangers skated to their second consecutive win in as many days.

Final shots on goal were 37-24 Kitchener, including 8-7 Blueshirts in the third period.

Kitchener was 0-for-2 on the power play, while Oshawa was also 0-for-2 with the man advantage.

The Rangers close out the busy week of four games in five-and-a-half days as they host division rival Guelph Storm on Sunday, November 20 at 2pm.