Rangers stave off Sting, 3-2, for seventh home win of the season 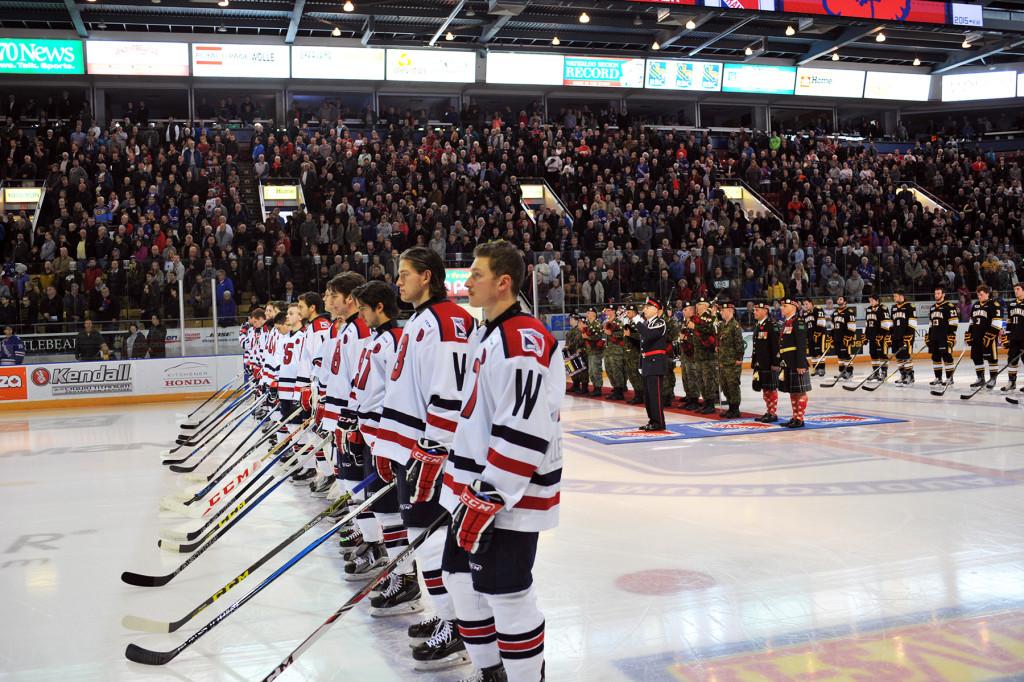 Special Teams was the key to victory for the Kitchener Rangers on Tuesday night.

Gustaf Franzen and Ryan MacInnis each scored a power play goal, and Nick McHugh scored his first career OHL goal on a shorthanded breakaway as the Rangers defeated the visiting Sarnia Sting 3-2 in front of a crowd of 6,518 at the Kitchener Memorial Auditorium Complex.

The win improves the Rangers record to 14-1-3-0 and 7-0-2-0 on home ice. Luke Opilka was pivotal in goal for the Blueshirts, as evidenced by his selection as first star of the game. He made 32 saves and allowed the Rangers to battle back after an early one-goal deficit, then did his part to maintain his club’s lead for the remainder of the night. He improves to 10-1-2-0 on the season.

Justin Fazio took the loss for the visiting Sting, who dropped to 10-6-2-0 and saw a modest three-game undefeated-in-regulation streak come to an end. Fazio allowed three goals on 28 shots and saw his personal record dip to 9-5-1-0.

Special Teams was certainly the tale of the tape where the offence was concerned for the Rangers, but their penalty kill also had just as big an impact. Just over a minute into the third period with the Rangers holding onto a slim one-goal lead, Brandon Robinson was called for a four-minute double minor for checking from behind. The home side was diligent and impressive, killing the penalty and building off that momentum to hold on for the one-goal win.

Head Coach Mike Van Ryn was impressed with his team’s effort, especially on the penalty kill, and thought it reflected a real sense of team pride amongst his players.

“I thought our PK was great,” said Van Ryn. “McHugh, the kid just skated like the wind out there tonight. He had two chances, scored on one and he deserved it. That kid works really hard.

“But bottom line, your goaltender has to be your best penalty killer, and tonight he was,” he said of Opilka. “I thought our other guys worked real hard getting in lanes and I thought our clears were better tonight than they have been in the past. Guys are taking pride in what they’re doing out there and it’s nice to see.” 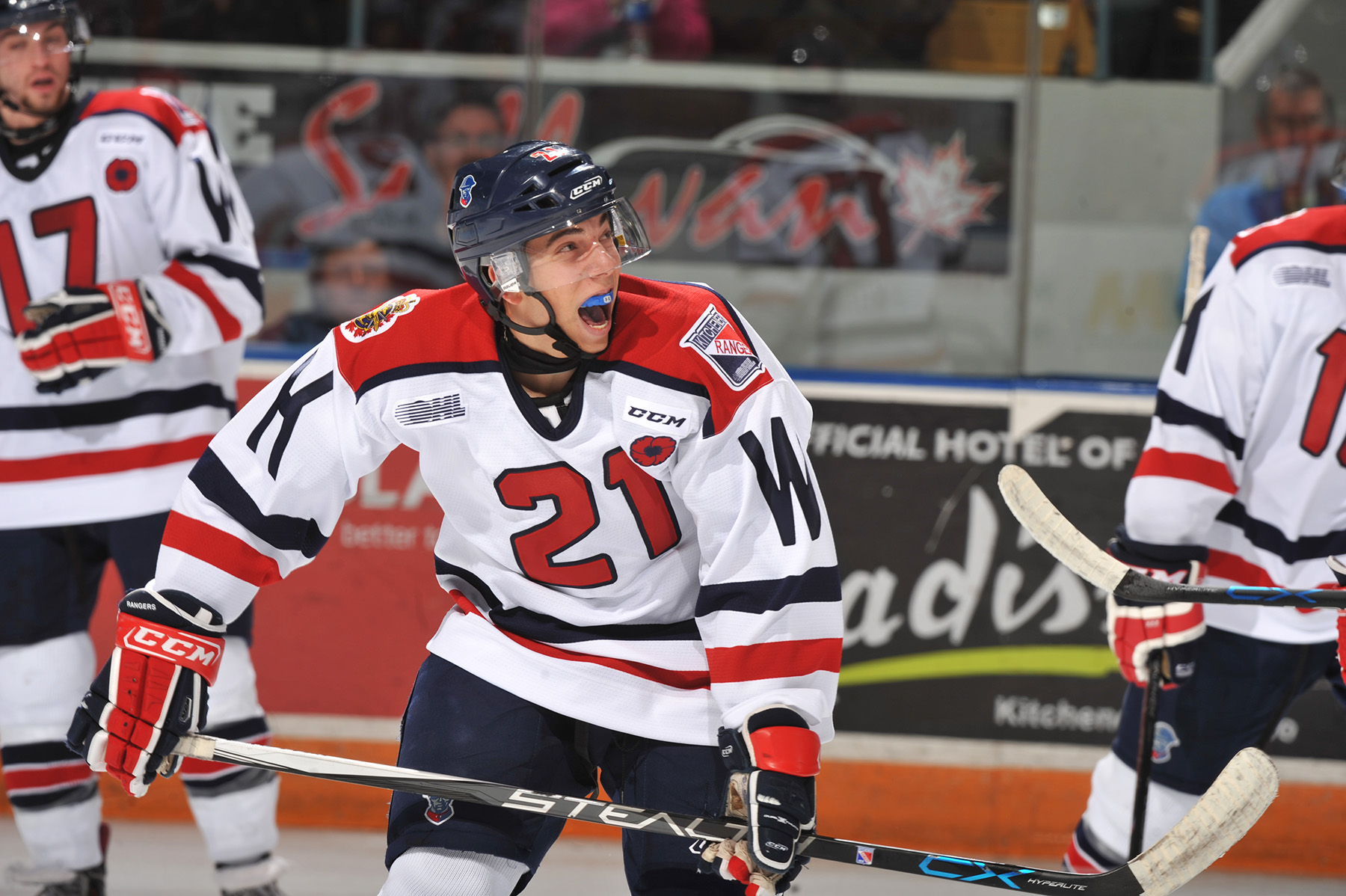 Following the game, it sounded like McHugh was still buzzing from the feeling of scoring that first career OHL goal.

“It was a great feeling,” he said with a smile. “I got the puck, then blacked out. All I remember is jumping into the boards after I scored and just feeling great.

He likely won’t forget the memory of his first OHL goal as it is, but to do it the way he did – by stripping the puck from first overall OHL pick Jakob Chychrun and scoring on a shorthanded breakaway – will make it even that much more impossible.

“After I got back to the bench, Coach came down to me and said, ‘You can tell your kids you stripped the puck from Jacob Chychrun for your first OHL goal’. He’s an unbelievable player, so it just makes the goal that much more memorable.

It was Hayden Hodgson who gave the Sting a 1-0 lead at 3:57 of the first period from Daniel Nikandrov and Connor Schlichting, but the Rangers would respond with Franzen’s power play goal with just 1:53 left on the clock in the opening period, assisted by Dmitrii Sergeev and Mason Kohn. The assist for Kohn extends his active point streak to six games (4G, 4A). The teams would skate to the first intermission in a 1-1 tie with the Sting holding a slight edge in shots, 12-9.

The stalemate was finally broken nearly midway through the second period when McHugh’s unassisted shorthanded marker made it 2-1 Kitchener at the 8:28 mark, unassisted.

MacInnis tallied his 13th of the season, the Rangers second power play goal of the night, to give the home side a 3-1 lead at 17:14 from Adam Mascherin and Frank Hora, but the two-goal lead was shortlived. The Sting’s Jordan Kyrou – following a short review – was credited with his team’s second goal of the night after some thought a sprawling pad save by Opilka might have kept the puck from crossing the line. Josh Jacobs and Jeff King picked up the assists on the goal at 18:31, which cut the Kitchener lead to 3-2. Following the second period of play, the Sting held a one shot lead over the Rangers, 26-25.

Shots were just 8-3 Sarnia through the scoreless final 20 minutes. Final shots were 34-28 in favour of the Sting.

The Sting were unsuccessful in five attempts with the man advantage. The Rangers had a total of eight power play opportunities on the night.

Before the game the Rangers paid tribute to past and present members of the Canadian military by welcoming to the ice the Royal Highland Fusiliers of Canada, Commanding Office Mark Poland and Regimental Sergeant Major John Kisslinger who partook in a ceremonial puck drop. Fans were also treated to a stirring rendition of ‘Amazing Grace’, played on the bagpipes. ‘O Canada’ was performed by Waterloo Regional Police Services Constable Detective Brian Duyn.

MacInnis, Hora and Brian Brosnan each wore ‘A’s and skated as assistant captains for the game.

The Rangers return to action on Friday, November 13th when they host the Saginaw Spirit at 7:30pm at the Kitchener Memorial Auditorium Complex.

Tickets for the Rangers game are available online at kitchenerrangers.com, by calling Centre in the Square, or through The Aud Box Office.