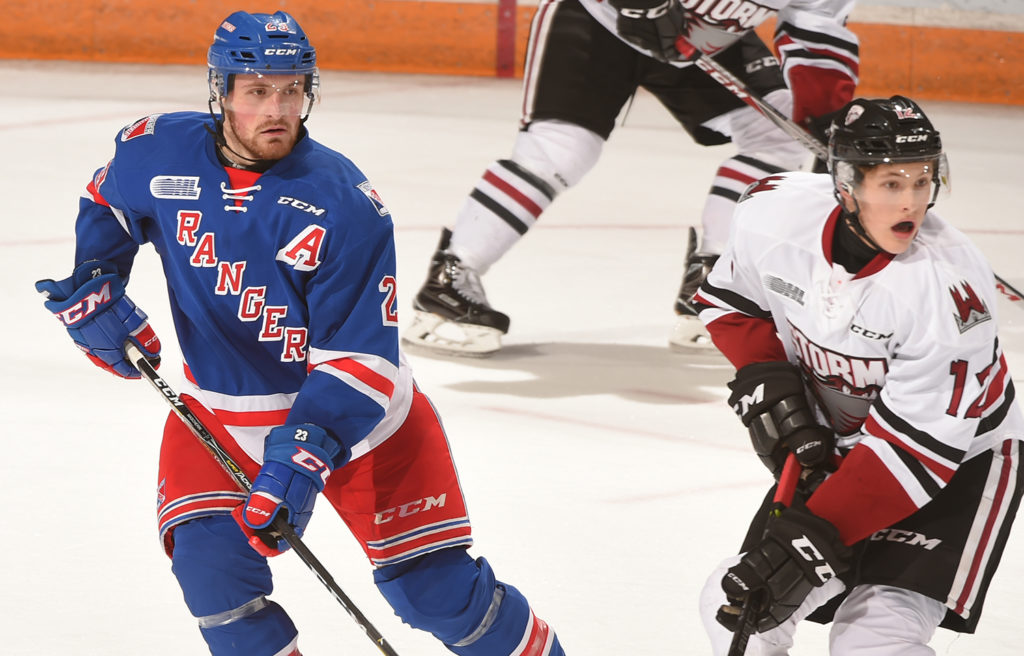 Down 4-2 with 1:13 to play, it looked as though the Kitchener Rangers were about to head back down Highway 7 a disappointed group on Sunday afternoon.

Instead, they received goals from Adam Mascherin and Connor Bunnaman just 23 seconds apart to tie the game before Joseph Garreffa banked the OT winner as the Rangers (41-19-2-0) skated away with a thrilling 5-4 win over the Guelph Storm (28-25-5-4) in front of 4,162 Storm and Rangers fans at the Sleeman Centre.

Mascherin certainly had himself a game, registering his 37th and 38th goals of the season as part of a four-point afternoon before being named the game’s well deserving First Star.

Logan Stanley also had a terrific offensive showing, tallying a goal and two assists as he continues to obliterate his previous career highs in goals, assists and points.

Garreffa’s OT winner also gave him a three-point game (1G, 2A), while Bunnaman finished the afternoon in his hometown with a goal and an assist.

The game also had special meaning for Givani Smith, who made his first visit back to the Sleeman Centre, taking on his former team for the first time since being acquired by the Rangers near the trade deadline. Smith would finish the game with a plus/minus of +1 with a shot on goal.

The Rangers headed into the afternoon with the opportunity to clinch the Midwest Division regular season title, but a London Knights win over the Ottawa 67’s meant the Rangers would have to wait for another day to attempt to accomplish the feat.

The Storm, however, did some clinching of their own as the single point they earned by heading to overtime secured the club their first playoff berth since the 2014-15 season.

The Rangers ran into penalty trouble in the first period, being whistled for three infractions – including a five-minute major and game misconduct to Jonathan Yantsis for a head check – in a span of just 4:05 near the end of the stanza.

They escaped the first period unscathed, but the same couldn’t be said for the remainder of the kill in the second as Nate Schnarr gave the hosts a 1-0 lead with a 5-on-3 Storm advantage. Isaac Ratcliffe and Ryan Merkley earned the assists on the goal, which came at the 0:38 mark of the second period.

But Mascherin would tie things up, as he registered his 37th of the season, from Bunnaman and Garreffa, to make it a 1-1 game at 6:36.

The Rangers took the lead just over three minutes later, as Stanley sprung from the penalty box and received a pass from Kole Sherwood, finding the back of the net for his 14th of the season. Rickard Hugg picked up the second assist on the 2-1 goal, which came at 9:49 to round out second period scoring.

Shots on goal after the scoreless opening frame were 13-11, Guelph and 27-22 Storm after two.

A wild third period began with the 37th goal of the season by Ratcliffe, tying the game, 2-2, at 7:17 from Alexey Toropchenko and Merkley.

It was the first of three straight goals for the Storm, who utilized a goal by Cedric Ralph at 8:11 then a power play marker by Liam Hawel at 14:04 to take control of the game and go up 4-2.

The Storm looked poised to coast to the victory, but with just 1:13 left on the clock, the Rangers breathed new life.

Mascherin’s second of the game and 38th of the season cut the Storm lead to 4-3, from Stanley and Garreffa, while the Rangers pulled Richardson in favour of an extra attacker.

The move paid off once again with Richardson on the bench as the Blueshirts tied the game, 4-4, with their second goal in just 23 seconds. Bunnaman’s 26th of the year came from the side of the net, from Stanley and Mascherin, at 19:10 to send the game to overtime.

Nearly three minutes into the extra frame it was Garreffa who, for the second time in just over a week was the OT hero for the Rangers, scoring his 10th of the season assisted by Mascherin and Nick McHugh to seal the come-from-behind win.

The Rangers were 0-for-2 on the power play, while the Storm were 2-for-5 with the man advantage.

Logan Stanley, Adam Mascherin, and Givani Smith each wore an “A” and skated as alternates to Rangers’ captain Connor Bunnaman.

Just four home games remain in the Rangers regular season schedule, with the next on March 6 as the Blueshirts once again host, for the second straight Tuesday, the Sarnia Sting at 7pm.

The Rangers host the Sault Ste. Marie Greyhounds on Friday, March 9 at 7:30pm then welcome the Saginaw Spirit to town on Sunday, March 11 at 2pm.

Kitchener’s final home game doubles as their last regular season game, as they host the Guelph Storm on Friday, March 16 at 7:30pm for Fan Appreciation Night.