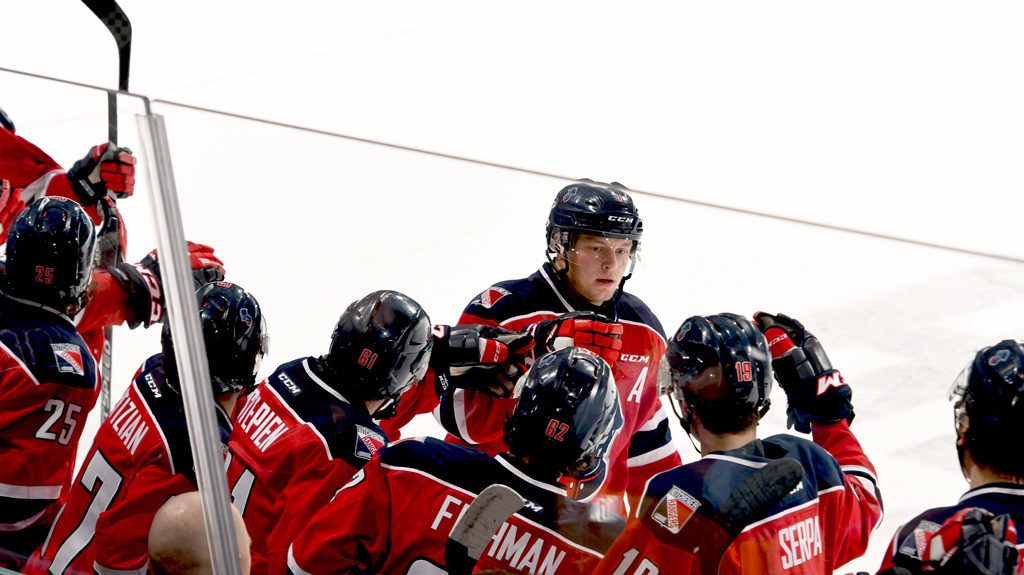 The Hamilton Bulldogs paid a visit to The Aud on Friday night to face the Rangers and they were certainly glad it was their only stop in Kitchener this season, as the home side skated away with a 9-6 win.

The last time the Rangers won eight in a row was 2015 when the team won 11-straight between October 12th and November 6th.

After heavy and sustained pressure in the Bulldogs end to start the game, the Rangers opened up the scoring at 8:30 when Michael Vukojevic and Francesco Pinelli assisted on a Donovan Sebrango (2) goal that was wristed with absolute precision from inside the faceoff circle on Zachary Roy’s right-side. 1-0.

Hamilton tied it up on the powerplay at 12:05 when a shot by Arthur Kaliyev was deflected off Logan Morrison’s skate and past Lucas Pfeil to make it 1-1.

At 16:35, the Rangers retook the lead. Mike Petizian had two attempts on goal while skating in on the net and the third chance was banged in by Jesse Fishman (3) and it was 2-1.

Joseph Serpa also earned an assist on the goal.

With exactly one minute left in the opening frame, Morrison was the benefactor of a missed pass that led to his second goal of the game, unassisted, to tie it up once more, 2-2.

While on the penalty kill, the Rangers got one back when Isaac Langdon broke out across the blueline with a 2-on-1 and passed cross-ice to Mike Petizian (4) who squeezed it between the pads of Roy to make it 3-2 at 13:07.

The Rangers extended their lead when Reid Valade (11) cleaned up a rebound off a Sebrango shot and it was 4-2.

With just 28 seconds left in the second, Axel Bergkvist sniped home his second of the season to put the Rangers up by three, 5-2.

Greg Meireles and Justin MacPherson earned assists on the goal.

Shots at the end of the first period were in favour of the Rangers 30-23.

It took just the first seven minutes of the third for the Blushirts to virtually seal Hamilton’s fate, as Arber Xhekaj scored his first of the season along with goals from Declan McDonnell (6), Francesco Pinelli (9), and Jonathan Yantsis (18).

Hamilton followed that up with a flurry of their own, tallying four unanswered goals of their own (which included Morrison’s third of the game).

The nine goals goals scored by the Rangers was a season-high and each was recorded by a different player.

The Rangers have a quick turnaround as they’re on the road in Guelph Saturday for a 2:00 pm matinee against the Storm.

After a mid-week game in Owen Sound, the Rangers return home on Friday December 20th for a match-up against the Sault Ste. Marie Greyhounds at 7:30pm.