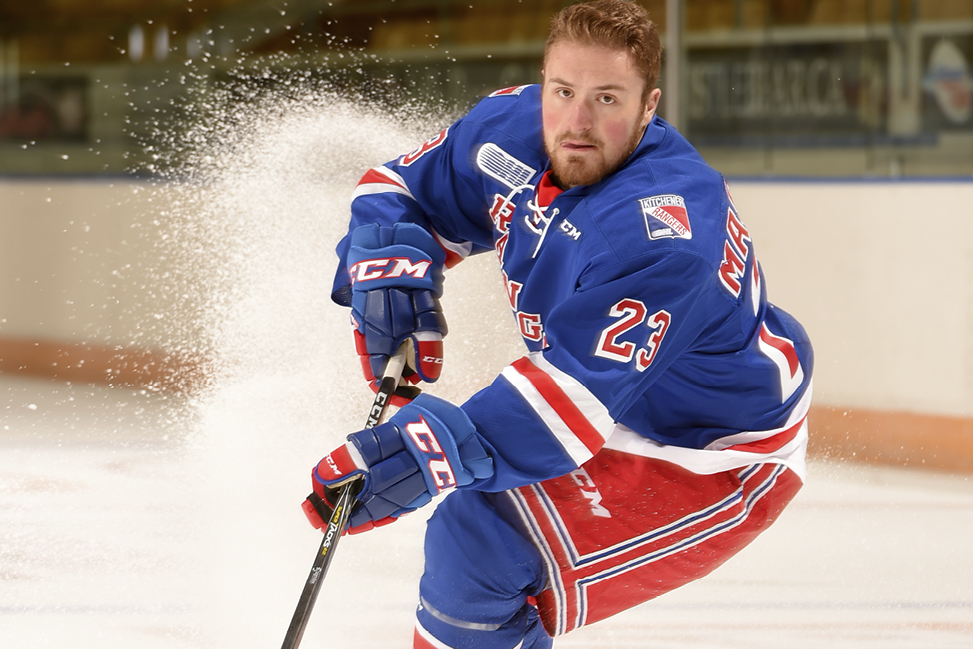 Anthony Dumont-Bouchard kept his Ontario Hockey League record pristine as the Kitchener Rangers dropped the Erie Otters, 3-2, in front of 4,725 fans at the Erie Insurance Arena on Saturday night.

Since coming to the Rangers (3-1-1-0) via Barrie, by way of the Quebec Major Junior Hockey League, the 20-year-old veteran has been a reliable last line of defence for the Blueshirts; tonight making 25 saves to spoil the home opener for the defending OHL champion Otters (1-3-1-0).

Dumont-Bouchard improved his record to 3-0-0-0 on the season, while his counterpart Troy Timpano saw his line dip to 1-2-1-0 after allowing three goals on 16 shots in the loss.

The win rounds out a 3-in-3 weekend for the Rangers, who captured five of a possible six points against the Otters tonight, Windsor on Thursday (W), and last night versus Owen Sound (OTL).

Joseph Garreffa gave the Rangers a 1-0 lead at 7:11 of the opening frame, a power play goal, assisted by Adam Mascherin and Logan Stanley.

Just under three minutes later they extended their lead to 2-0 after Connor Hall, down low, found Jake Henderson near the hash marks who buried his second of the season. Nick McHugh earned the second assist on the goal, coming at 9:53.

Before the period was out the Otters would etch the scoresheet, as Gera Poddubnyi cut the Rangers lead to 2-1 at 16:36, from Maxim Golod and Ryan Martin, to round out first period scoring.

Shots on goal in the first period of play favoured Erie, 12-7.

After a scoreless second, Mascherin tallied his third of the season with a beautiful, highlight-reel snipe from behind the goal line, giving Kitchener a 3-1 lead at 3:54, from Greg Meireles and Garreffa.

Christian Girhiny would answer back for the Otters, cutting the Rangers lead to 3-2 after banking a pass from Patrick Fellows into a gaping net. Joseph Mack earned the second assist on the goal at 5:50 of the third.

The Otters pulled Timpano in the closing minutes of the frame, but failed to tally the equalizer.

Kitchener finished the game making half of their opportunities on the man advantage count, going 1-for-2. Erie was 0-for-3 in their power play chances.

The two teams meet again on Friday, as the Otters visit The Aud to take on the Rangers on October 6th for a 7:30pm start.

Stanley, Mascherin, and Henderson each wore an “A” and skated as alternates. Captain Connor Bunnaman missed the game to flu-like symptoms.