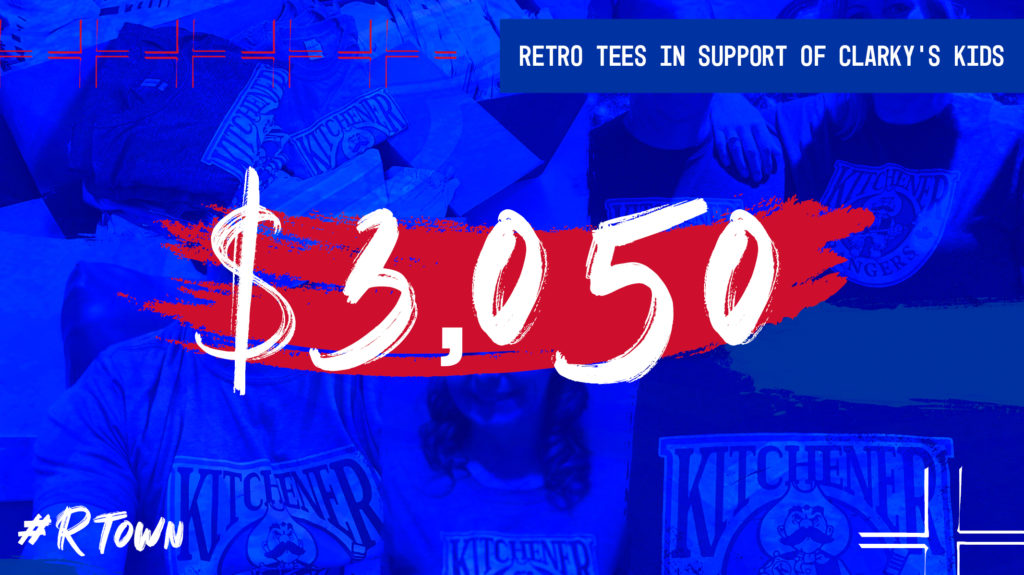 KITCHENER, ON – Since 1995, Kitchener Rangers fans have been flooding the ice with bears during the annual Teddy Bear Toss game immediately following the Ranger’s first goal. Unfortunately, this year made that a near impossible feat.

What was possible though, in collaboration with Rangers Reach, was to commemorate the team jersey worn during the first ever Teddy Bear Toss game in 1995. We put on our thinking caps as to how we could replace the community support generated from the Teddy Bear Toss. We came up with an idea and created a retro t-shirt with that era’s logo.

The shirts were sold in the month of December and raised $3,050.00 to benefit Clarky’s Kids.

The funds will support Clarky’s Kids – a charitable initiative started by the Kitchener Rangers and alumnus David Clarkson – has been a big supporter of POGO’s financial assistance to family’s program since 2008.

We would like to thank Civilian Screen Printing, who produced the Retro T-Shirts and sold them through their KW-Awesome.ca website. Civilian created the I Love KW Campaign, which helps local business and organizations during the pandemic.

Thank you to everyone that purchased a Retro Tee in support of Clarky’s Kids, and have continued the tradition and spirit of Teddy Bear Toss.