Rookie defenceman is an ace up Rangers’ sleeve 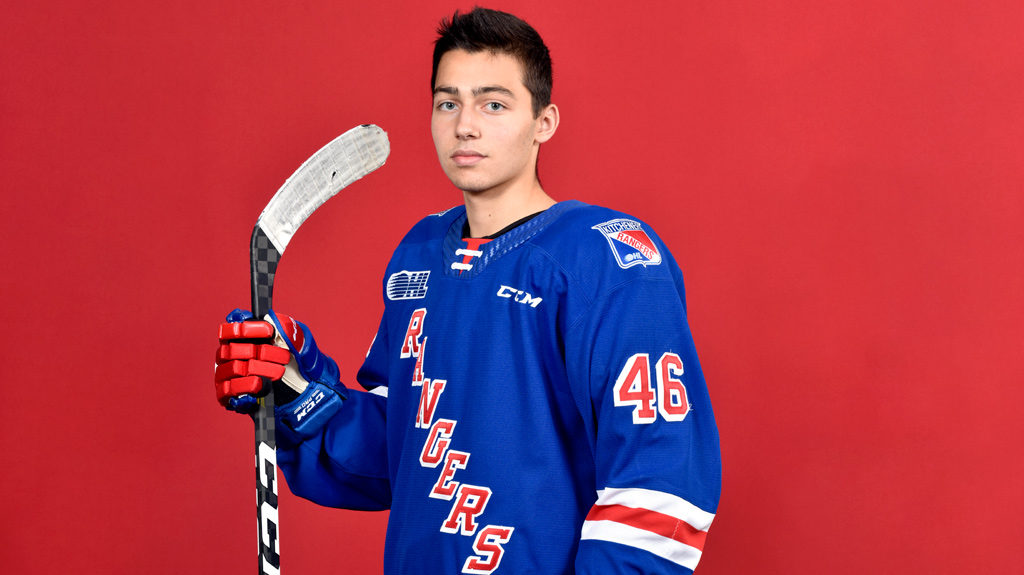 When the Blueshirts drafted American-born defenceman Simon Motew in this past summer’s OHL Priority Selection, it was with his scoring ability in mind.

As a fourth-round pick (75th overall), Motew is known as an offensive-defenceman. In his final season with the Chicago Mission 15s, he recorded 13 points (three goals, 10 assists) in just 20 games.

“I love when the puck’s on my stick and I’m playing in the offensive zone,” said the native of Highland Park, IL.

“I just consider myself to be a two-way, good defenceman who loves playing offensively.”

Ironically, that passion evolved from initially trying to stop pucks as a goaltender – which didn’t produce the best results.

“I really looked-up to my oldest brother who was a goalie, so my dad put me in net,” explained Motew, adding, “I let in 12 goals on 12 shots and he took me right out and said you’re never playing goalie again.”

With his dad Ken doubling as a minor hockey coach, Motew had to learn a lot about his game from watching.

“He would always sit me, because I was the youngest player on the team,” said Motew.

“I would probably get one shift a game while the older kids played – so it’s ironic that I didn’t get any special treatment. It was fun though.”

As his on-ice play progressed, Motew developed a thick-skin off it by regularly trading good-natured verbal jabs with his four other hockey-playing siblings – especially brother Asher who is just two years older.

“Our household was pretty competitive. If one of us didn’t finish a game with a goal, we would all chirp each other about it. We’ve always wanted the best for each other though,” described Motew.

The 16 year-old, who has an affinity for playing Blackjack and Texas Hold ‘Em with his sibling, wasn’t a wild card selection for the Rangers by any stretch. In fact, the organization saw him as providing the defence corps that only totaled 17 goals last season with a scoring boost.

The rookie was certainly at his best this past summer as he skated on the 2019 U.S. Under-17 Men’s Select Team that placed second at the Five Nations Tournament in Füssen, Germany. He tallied a goal and two assists for three points in four games overseas.

“Putting on my USA jersey, there was no better feeling,” he said.

“There were a lot of good players there. Three buddies who I played with the Chicago Mission were selected with a lot of other Chicago and Minnesota kids. We all got along great and created a really nice bond.”

Now living full-time in Kitchener, one teammate that he’s struck a connection with is fellow first-year Francesco Pinelli.

“We’re like brothers now. It’s really awesome. We drive to school and do everything together,” he described.

“Pinelli’s scoring a lot of goals and I always hear about it at dinner, but it’s great.”

And while he’s still waiting to raise his arms to celebrate his first career OHL goal, Motew already found his way onto the scoresheet – in his Rangers debut no less – with an assist in the team’s first game of the season.

“To start the season, the coaching staff just wanted to ease me into it, but it’s been awesome that they’ve given me an opportunity to play a lot. It’s what I’ve come here to do,” he said of playing in the first six games of the season and eight of 13 overall.

“Vukojevic, especially, is a really nice guy. He’s always giving me tips and telling me when I’m doing a good job, so it’s really awesome to hear that from him,” he said of the New Jersey Devils prospect.

“All of the veterans help so much. If you make a mistake, they’re understanding. They don’t get down on you at all, they just try and help you along.”