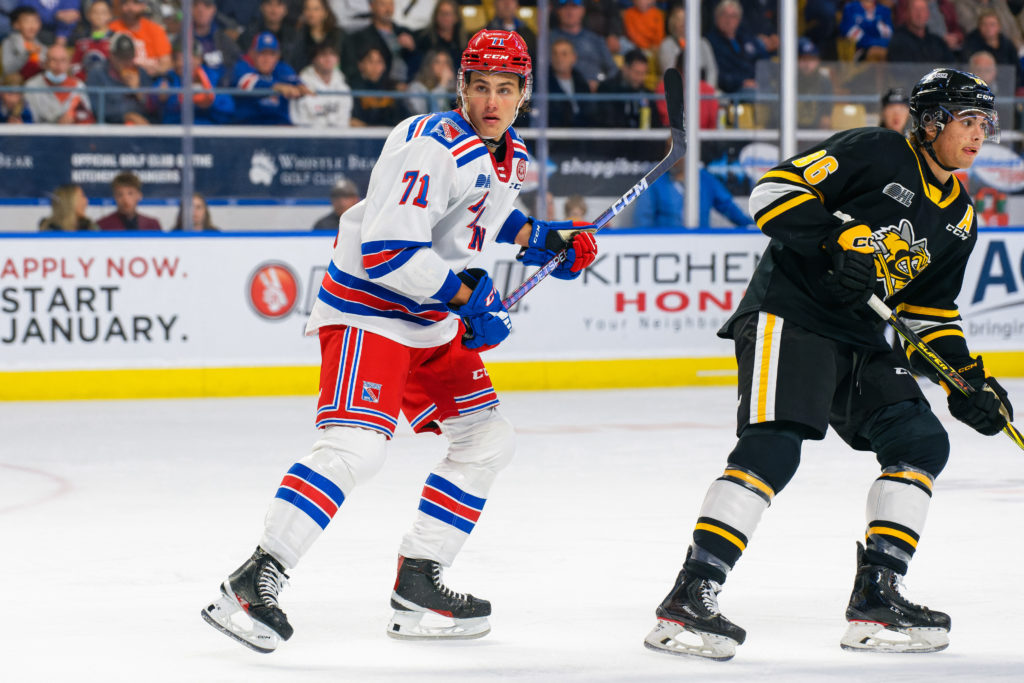 Sarnia, Ont. – After posting a 4-2 victory over the first place Ottawa 67’s on home-ice Friday, Kitchener is off to Sarnia to play the Sting Saturday night. Puck drop is set for 7:05 p.m. at the Progressive Auto Sales Arena.

Head-to-Head:
Kitchener has had the Sting’s number over the last five seasons, owning a 15-3-0-2 record. Kitchener has only lost once in regulation in Sarnia over that time and is 7-1-0-1 in nine games at Sarnia. Although Kitchener lost the season opener to the Sting 6-3, they won their last meeting at the Progressive Auto Sales Arena 5-1 on Mar. 6, 2022. Francesco Pinelli led the team in scoring with three points in that game with Simon Motew and Adrian Misaljevic joined him on the scoresheet with one point a piece. Benjamin Gaudreau of the Sarnia Sting got the start in that game.

The Rangers got back in the win column Friday night, defeating the league-leading Ottawa 67’s 4-2. Kitchener is now only three points out of a playoff spot with four games in hand over the Soo Greyhounds. The Rangers enter play 2-6-2-0 over their last 10 games and will look to put together a nice stretch with 30 games remaining on the schedule. Sarnia is also trying to climb the standings and are 6-4-0-0 over their last 10 games. Sarnia is coming off a home win to Erie by a score of 4-3 Friday night.

Scouting the Rangers:
Both Francesco Arcuri and Francesco Pinelli were on the score sheet for Kitchener in their win over the 67’s Friday. Arcuri scored his 28th goal of the season, moving him into sole possession of fourth-overall in the league. Arcuri has also recorded 20 assists this season to give him 48 points in 41 games on the year. He leads the Rangers in points and still shares the second highest goal total on the power-play with teammate Carson Rehkopf with 13.

Francesco Pinelli added a goal and an assist in Kitchener’s win giving him 46 points (23G 23A) in 31 games. Pinelli is recording points at the 10th-highest percentage in the league at 1.48 points per game. He now has a goal and at least one point in two straight games and will look to continue that streak.

Danny Zhilkin (Winnipeg Jets) had an impressive game for the Rangers Friday night opening the scoring in the first two minutes of the game on an end-to-end rush. Zhilkin would also add an empty net goal for Kitchener to ensure the victory over the league leaders. He is now up to 33 points (17G 16A) in 32 games this season.

Ty Voit is the OHL leader with 63 points points (11G, 52A) and leader in assists and is on pace to record over 100 points this season. Voit scored 26 goals for Sarnia last season and although he only has 11 this season, he is already just two off his assist total from a season ago.

Luca DelBelBelluz (Columbus Blue Jackets) was the Sting’s player to watch last night in their game against Erie and came over in a trade to Sarnia with teammate Ethan Del Mastro (Chicago Blackhawks) from the Mississauga Steelheads. DelBelBelluz is building on his draft eligible season in which he produced 76 points (30G 46A) in 68 games. This season, through through 39 games, DelBelBelluz has 45 points (20G 25A) and is on pace to beat his point total from a season ago.

Along with Ethan Del Mastro, Sarnia acquired Christian Kyrou from the Erie Otters. Kyrou is third in the OHL in points by defencemen this season with 46 points (12G 34A) in 37 games and ranks third in assists. Kyrou has played three games against Kitchener already this season and has six points (3G 3A). His best game came in Erie where we recorded a hat-trick and one assist in a come from behind victory for the Otters.

Broadcast Coverage:
Saturday night’s contest will be televised live throughout Kitchener and the Waterloo Region on Rogers TV, cable channel 20. In addition, the contest can be watched across the province of Ontario on the Super Sports Pack on channel 469 for cable subscribers. The game will be streamed live online in a web browser at OHLLive.com, and on the CHL App  for mobile devices including smart TV’s such as including Apple TV, Roku and Amazon Fire.

Additionally, fans can listen to the game on the radio on CityNews 570 AM CKGL. Mike Farwell (play-by-play) and Chris Pope (colour commentary) will call the game on the radio. Fans can tune in to the radio pregame show 30 minutes prior to puck drop. For more information on Kitchener Rangers broadcast coverage, click here.