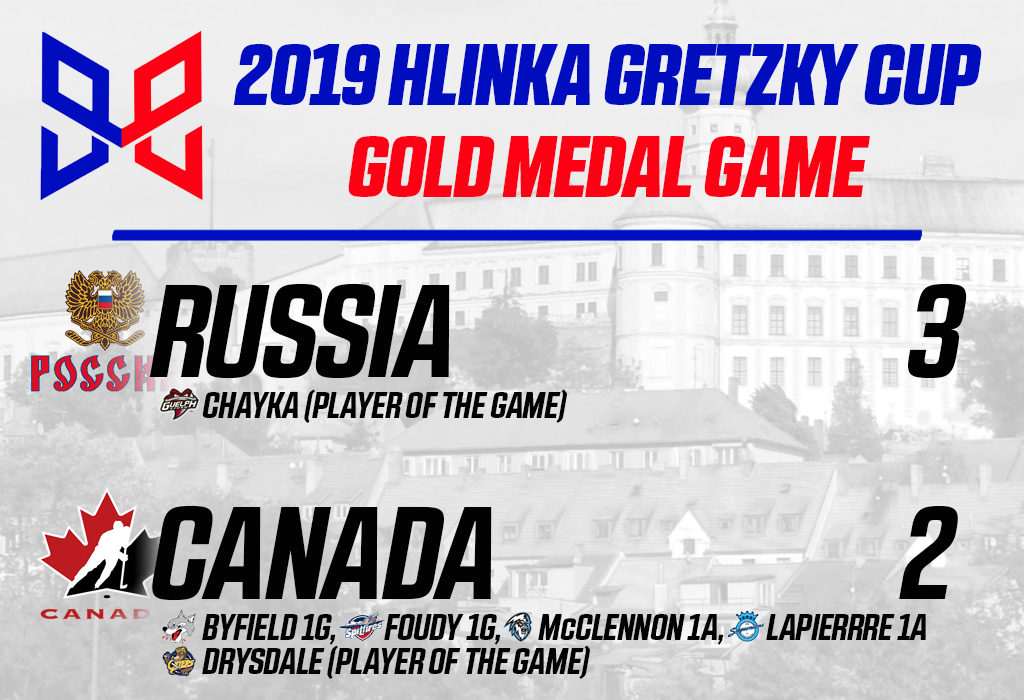 Following a thrilling semi-final versus Sweden on Friday, Canada returned to the ice Saturday against Russia for the final match of the 2019 Hlinka Gretzky Cup, ultimately coming away with the silver medal in a narrow 3-2 final.

The Russian squad opened the scoring less than four minutes into the initial frame before 2020 NHL Draft hopeful Quinton Byfield of the Sudbury Wolves knotted the score early into the second period. Canada would again trail by a 3-1 margin midway through the final period before forward Jean-Luc Foudy of the Windsor Spitfires brought the Great White North within one.

“It was hard to complete passes but we just tried to get a lot of pucks to the net,” Team Canada coach Michael Dyck of the Vancouver Giants said in a statement. “(Russia) was able to convert their opportunities and we were not, and I think that was the difference.

“I am really proud of these guys and the way they came together as a group. This is the ultimate short-term competition and our team did a great job this week.”

With the victory, Russia claims the gold medal at the Gretzky Hlinka Cup (previously known as the Ivan Hlinka Memorial Tournament) for the first time since 1995, while Canada comes away with the silver and its 26th medal since the tournament began in 1991, counting 22 gold, three silver, and one bronze.

Among the Russians to win gold Saturday was Guelph Storm defenceman Daniil Chayka, a projected top selection in the 2021 NHL Draft. Chayka was named Player of the Game for Team Russia, while captain Jamie Drysdale (Erie Otters) received the same distinction for Canada.