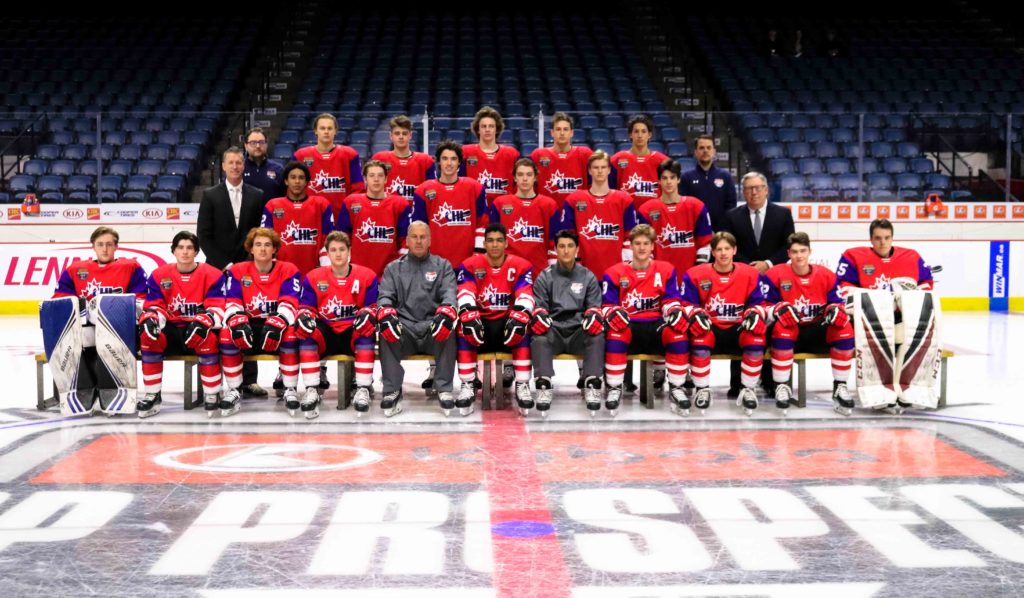 Trailing 2-1 after 20 minutes of action, Foerster put up back-to-back markers to open the middle frame with each drawing a helper from Zary. Team White’s scoring succession continued just over three minutes after Foerster’s second of the night when Brandon Wheat Kings blue-liner Braden Schneider skated in to the right circle before grabbing a quick pass from Foerster and netting the eventual game winner.

“I think my linemates and everyone was really skilled out there. We had some really good chemistry and I was able to find the net,” Foerster said postgame. “I think Zary is really skilled and made some great passes. He’s really smart and I was glad to have him as my centerman.”

The 41st ranked prospect in NHL Central Scouting’s Midterm Report, Foerster was honoured as Team White’s Player of the Game following the victory.

“I felt good out there and as the game went on it just got better, so it was a good game tonight,” added Zary, who ranked 12th in the midterm assessment. “Obviously something clicked there tonight (with Foerster) and everything worked out well.”

“It was a tough loss but it was a good experience,” said Quinn, the ninth-ranked North American skater and Team Red’s Player of the Game. “I wanted to showcase myself like everyone else, work hard, and compete hard, and I think that’s what I did. I wasn’t expecting (to win Player of the Game) but it’s definitely a pretty big honour.”

Between the pipes, Victoria Royals netminder Brock Gould impressed in playing the full 60 minutes for Team Red after top-ranked goaltender Nico Daws of the Guelph Storm suffered an upper-body injury in warm-up. In all, Gould wrapped up the night with 27 saves, coming just two short of the event record set by Roberto Luongo (Val-d’Or Foreurs) in 1997. At the opposite end for Team White, Samuel Hlavaj (Sherbrooke Phoenix) stopped 11 of 13 shots while Dylan Garand (Kamloops Blazers) turned aside 10 of 11 pucks.

The 25th edition of the annual prospect showcase paid tribute to former NHL Director of Central Scouting Jim Gregory, a longtime builder of the sport and former Ontario Hockey League general manager who passed away in October at age 83. In honour of his significant impact, in the 2012 the Canadian Hockey League announced that the Player of the Game awards at the annual Top Prospects Game would be named in his honour, while this season the OHL also launched the Jim Gregory General Manager of the Year Award in recognition of the GM who best excels in his role.

The 2020 Kubota CHL/NHL Top Prospects Game marked another successful event that drew more than 300 talent evaluators from hockey’s highest level and a crowd of over 6,400 enthusiastic junior hockey supporters to Hamilton in what was ultimately another instant classic.