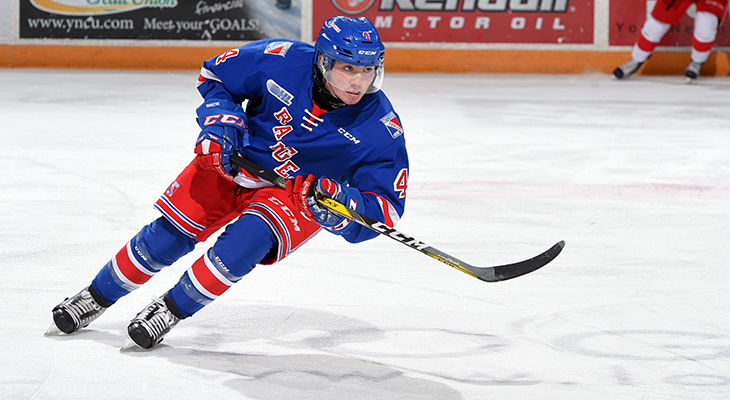 It was a 1-1 game most of the afternoon, with Senyshyn’s game winner coming with just over two minutes to play in the game for the Greyhounds.

The two points maintained the Soo’s four-point lead over the Windsor Spitfires, who also won on Sunday afternoon with a 7-1 decision over the Sudbury Wolves. The Greyhounds and Spitfires each have just six games remaining in their regular season schedule, with the Soo sitting 2nd and Windsor 5th in the Western Conference standings.

For the sixth-place Rangers (72 points), they failed to distance themselves from the Flint Firebirds (69) who are nipping at their heels in seventh place. Kitchener remains three-points up on Flint with five games to play, but the Firebirds now have a game in hand after sitting idle on Sunday.

On just the Greyhounds’ second shot on goal of the game, Senyshyn notched his 40th of the season to give the Soo a 1-0 lead at 2:04 of the first period.

The Greyhounds maintained the one-goal lead for the majority of the period, until Joseph Garreffa potted his 24th of the season on the power play, from Adam Mascherin and Connor Bunnaman, with just six seconds left on the clock.

Shots on goal in the first period of play were 9-5, Kitchener.

The game remained tied, 1-1, through the second period as well as much of the third, before Senyshyn’s second of the game with 2:09 to play proved to be the game winner, assisted by Morgan Frost and Noah Carroll.

Kitchener was 1-for-2 on the power play, while the Soo was 0-for-4 with the man advantage.

During the game, Rangers’ starting goaltender Luke Richardson wore a special mask designed by Rangers fan Joel Guse. Joel was the winner of the Sun Life Financial Kids in Gear Mask Design Contest after his design was selected and turned into an actual goalie mask, with artwork by David Arrigo.

Joel first got the chance to see his design come to life two weeks ago when he was invited to a Rangers practice. He chatted and watched drills with Rangers’ defenceman Connor Hall, got his jersey signed by the team, met a number of the Rangers after practice, then got to see his mask up close for the first time after it was unveiled to him by Richardson. Watch the video below for more on Joel’s experience designing his very own game-worn Kitchener Rangers goalie mask through the Sun Life Financial Kids in Gear Mask Design Contest.

The Rangers get a bit of a break before heading out on the road for three straight games. They finish off a ‘home-and-home’ of sorts with the Greyhounds, as they take on the Soo on Friday, March 10th at 7:07pm at the Essar Centre before taking on the Flint Firebirds on Saturday, March 11th at 7pm at the Dort Federal Credit Union Event Center.

They make their final visit of the season to the Sleeman Centre to take on the Guelph Storm on Tuesday, March 14th at 7pm before finally returning home for their final home game of the regular season – ‘Fan Appreciation Night’ – on Friday, March 17th at 7:30pm vs. the Erie Otters. They close out the season with one last road game in Owen Sound when they take on the Attack on Saturday, March 18th at 7:30pm.