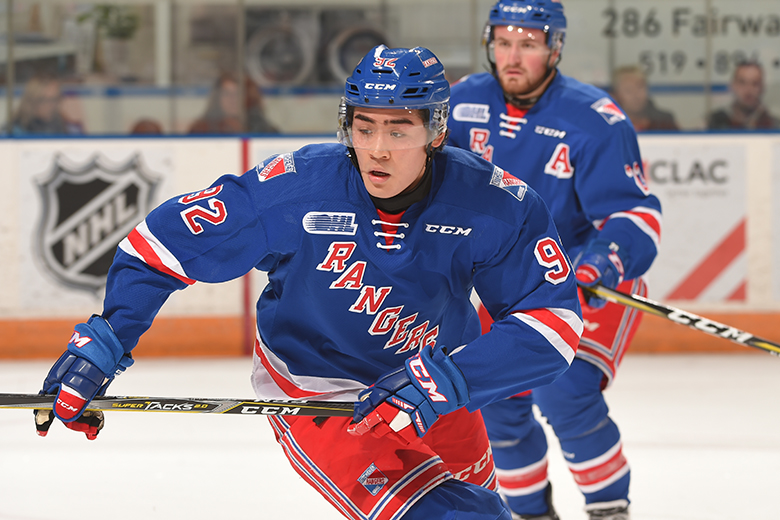 If Friday was a sign of things to come for the Kitchener Rangers top line, then Rangers Nation has a lot to be excited about.

Kole Sherwood, Adam Mascherin and Logan Brown combined for 11 points as the Rangers skated to a convincing 6-2 win over the visiting Saginaw Spirit in front of 6,963 fans at the Kitchener Memorial Auditorium.

Sherwood tallied his second hat trick as a member of the Rangers (32-14-2-0), and in the process, notched his 18th, 19th and 20th goals of the season along with an assist.

Adam Mascherin also registered a four-point effort – a goal and three assists – while Brown made his long-awaited Rangers debut by notching a trio of helpers.

Eric Guest and Riley Damiani were the other Kitchener goal scorers, who claimed their fifth straight victory which matches a season-high.

Former Rangers forward Mason Kohn played his first game back at The Aud after spending three-plus seasons on East Ave, and scored one of two Saginaw (23-18-4-0) goals on the night.

Similar to the last time the teams met just under two weeks ago, the Rangers found themselves down a goal in the early-going. Ryan Stepien gave the Spirit a 1-0 lead, from Max Grondin and Hayden Davis, just 1:54 into the game.

But the Rangers would answer back – and then some – starting with Sherwood’s 18th of the season, evening things up at 1-1. Brown earned the primary assist on the goal for his first point as a member of the Blueshirts, with Mascherin earning the second helper at 4:53.

Just 1:25 later it was Guest who gave the home side the lead, registering his fifth goal of the season after burying a pretty cross-crease pass from Jack York. Jonathan Yantsis picked up the second assist at 6:18.

At the 13-minute mark Damiani found a sliver of space from the side of the net between the post and the arm of Cormier, and the sophomore tallied his 16th of the season from Nick McHugh to round out the first period attack.

Although leading 3-1, Kitchener trailed in shots by a 12-9 margin.

The lone goal of the second period was the second of the game for Sherwood, this time a power play marker while the Rangers enjoyed a 5-on-3 man advantage. His 19th of the season, from Brown and Mascherin, to put Kitchener up 4-1.

Shots after 40 minutes of play favoured the Blueshirts, 21-16.

Mascherin picked up his third point of the night with his 31st goal of the season, giving the Rangers a 5-1 lead at 3:13, with Sherwood and Culina picking up the assists.

At 6:53 a familiar face found the back of the net as Mason Kohn scored his 13th of the season, from Nicholas Porco and Cole Coskey, to cut the Rangers lead to 5-2.

Sherwood’s hat trick goal rounded out the game’s scoring, making it 6-2 from Mascherin and Brown at 16:52.

The Rangers were 1-for-4 on the power play, while the Spirit were 0-for-3 with the man advantage.

Austin McEneny, Adam Mascherin, and Logan Stanley each wore an “A” and skated as alternates to Rangers’ captain Connor Bunnaman.

The Rangers finish off this weekend’s action tomorrow night when they take to the road to face the Flint Firebirds at 7pm. Their next home game is next Friday, February 2 when they host the Hamilton Bulldogs for the lone time this season at 7:30pm.