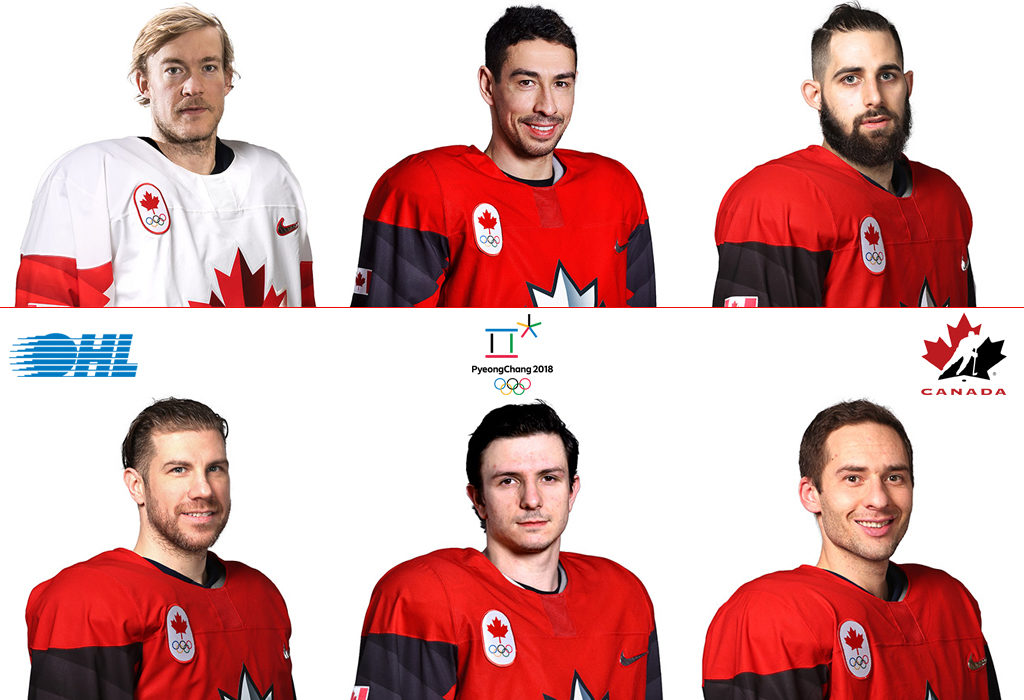 CALGARY, Alta. – Hockey Canada and the Canadian Olympic Committee (COC) have announced the names of the 25 players nominated to represent Team Canada in men’s hockey at the 2018 Olympic Winter Games, Feb. 9-25, in PyeongChang, South Korea.

Canada’s roster includes a total of six OHL graduates including a goaltender and five forwards:

Players will be joining Team Canada from seven different leagues across North America and Europe. Among them there are 25 appearances as part of Hockey Canada’s Program of Excellence, including gold medals at the IIHF World Junior Championship (Goloubef – 2009) and the IIHF U18 World Championship (O’Dell – 2008). Eight players have competed at the IIHF World Championship, and 10 have won the Spengler Cup for Canada, including seven who were part of the 2017 tournament (Ebbett, Goloubef, Lapierre, Noreau, Poulin, Raymond and Thomas). There are 5,544 NHL games played – with Kelly, a 2011 Stanley Cup champion with the Boston Bruins, having played the most of the group (833).

“It has been an exciting journey to arrive at this 25-player roster, and I want to congratulate these players on earning their place in history to represent Canada on the biggest sporting stage in the world – the Olympic Winter Games,” said general manager Sean Burke. “I want to thank Hockey Canada, the management group, our coaches, and our team staff for ensuring that we had all of the resources we needed to focus on assembling a team that Canadians will be proud to cheer on in PyeongChang. We have a very special group of talented players and staff who are ready to compete in South Korea next month, and we will cherish the opportunity we’ve been given to stand alongside the other Canadian Olympians and represent the red-and-white.”

“The pride and honour that comes with representing your country at the Olympic Games is a feeling that can’t be accurately described,” said Renney, who was a member of the Canadian Olympic Team in 1994, where he guided the Canadian Men’s Olympic Hockey Team to silver as head coach. “We have 25 unique and very special stories wrapped up within this team – stories that Canadians will rally behind, not only because of what these players do on the ice, but of what they are capable of off the ice. And beyond the players are a group of dedicated staff who have done everything in their power to ensure the Canadians we had identified as Olympic prospects were able to go out and focus on the task-at-hand.

“As an Olympic coach myself, and a leader of hockey in Canada, I appreciate the role the Olympic Games have in showcasing not just the game of hockey, but also Canada’s passion for our game, and inspiring the next generation of athletes to get on the ice. I know this year’s Olympic hockey team will succeed in igniting that passion not only in Canada, but around the world.”

“This team proves the depth of Canadian hockey,” said Isabelle Charest, PyeongChang 2018 Team Canada chef de mission. “All of Canada will rally behind this team as it sets out to show the world that we will always be a force to be reckoned with on the ice. We will be cheering 36 million strong as the team competes for gold.”

“We all know that Canadians are crazy for hockey, so there’s no doubt everyone back home will be watching and cheering,” said the Honourable Kent Hehr, Minister of Sport and Persons with Disabilities. “We are excited to be represented by this outstanding group of men as they go for the gold in PyeongChang. Let’s go Canada!”

Canada is traditionally a force to be reckoned with in men’s hockey, winning 13 medals, nine of them gold, since the first Olympic hockey tournament was held at Antwerp 1920. The team is looking to repeat as gold medallist for a third consecutive Olympic Winter Games, having won back-to-back tournaments at Vancouver 2010 and Sochi 2014.

Team Canada opens its Olympic schedule on Thursday, Feb. 15 at the Kwandong Hockey Centre in Gangneung, when it meets Switzerland in Group A. The gold-medal game is set to take place on Feb. 25.

Prior to being named to Team Canada, all nominations are subject to approval by the COC’s Team Selection Committee following its receipt of nominations by all National Sport Federations in late January 2018.