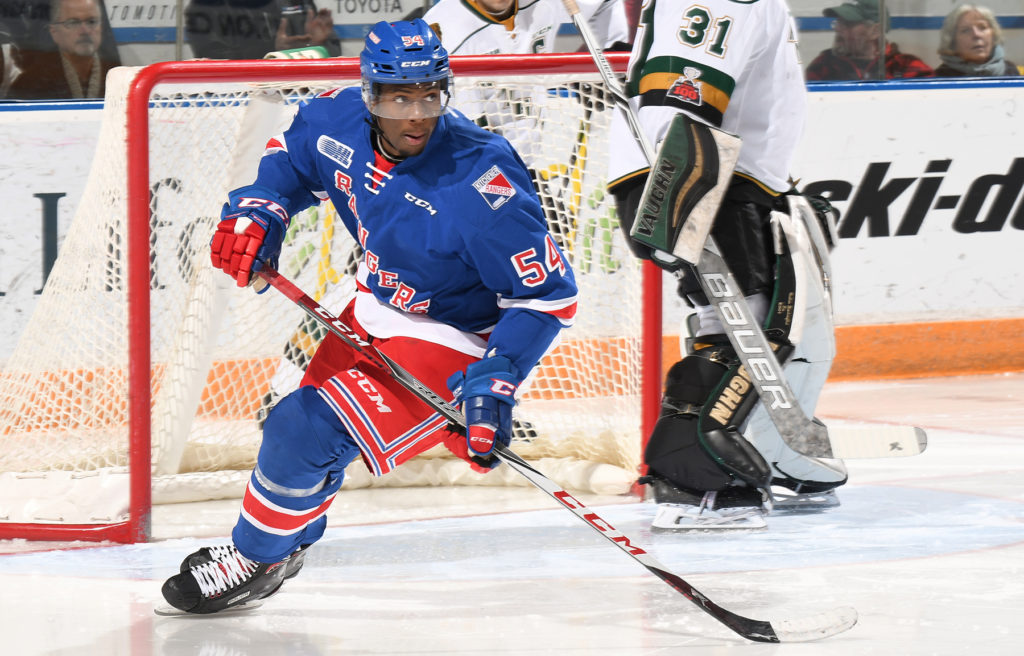 Givani Smith scored in regulation then added the game winner in the fifth round of the shootout as the Kitchener Rangers (31-14-2-0) rallied to defeat the London Knights (25-17-2-2), 3-2, in front of 8,616 fans at Budweiser Gardens on Tuesday night.

Luke Richardson (19-10-1-0) was stellar in goal in his first start since January 14 against these same Knights. After surrendering two first period markers he shut the door for the rest of the night, making 26 consecutive saves and 29 on 31 shots, in total.

Joseph Raaymakers (19-8-1-1) took the loss for the Knights, snapping a three-game winning streak for the club and extending Kitchener’s winning run to four straight games. Raaymakers was tagged for two goals on 25 shots through regulation and overtime before being beaten by Smith in the shootout.

Smith was the only scorer in the five-round shootout; the first time the Rangers went beyond overtime this season. The Knights are 1-2 in the shootout this year.

Alex Formenton opened the game’s scoring for the Knights just under six minutes into the first period, tallying his 12th of the season, unassisted, at 5:53.

Just under a minute later Alex Turko’s first career OHL goal made it 2-0 London, from Dalton Duhart and Lucas Rowe at 6:51.

But it would prove to be the Rangers turn to answer quickly as Smith once again etched his name on the scoresheet, cutting the Knights lead to 2-1 just 30 seconds later, from Garreffa and Adam Liška at 7:21.

With London leading 2-1 through the first period of play, they also led the shot clock, 17-10.

The Rangers found themselves on a 4-on-3 man advantage over five minutes into the middle frame, and capitalized on the opportunity.

Mascherin sailed a shot from his sweet spot; down low and just to the right of the goal, but the puck rang off the post. He corralled it once again, this time electing to pass, cross-crease, to Connor Bunnaman who pounced for a one-timer that beat Raaymakers.

Bunnaman’s 19th of the season tied the game, 2-2, at 5:42 assisted by Mascherin and Logan Stanley, and proved to be the lone goal of the middle stanza.

Shots on goal through 40 minutes of play stayed in London’s favour, 22-14.

The Rangers had a number of chances to take their first lead of the night, especially in the latter half of the third period, but the score would remain deadlocked through to the end of regulation, as well after the five-minute overtime.

The first three rounds of the shootout didn’t resolve anything, and it wasn’t until Smith came in to shoot as the tenth shooter (fifth round) to seal the win for the Blueshirts.

The Rangers were 1-for-3 on the power play, while the Knights were 0-for-5 with the man advantage.

Joseph Raaymakers (LDN) (3), Luke Richardson (KIT) (2), and Alex Formenton (LDN) (1) were selected as the Three Stars of the Game.

Kole Sherwood, Adam Mascherin, and Logan Stanley each wore an “A” and skated as alternates to Rangers’ captain Connor Bunnaman.

The Rangers are back on home ice Friday, January 26 when they host Mason Kohn and the Saginaw Spirit at 7:30pm.