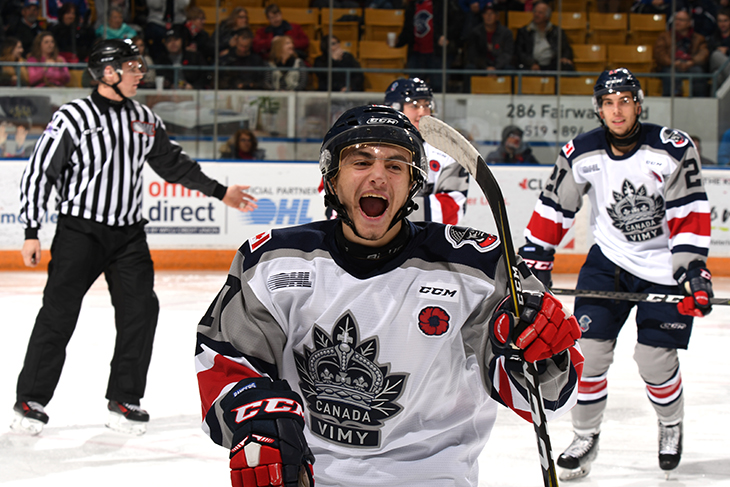 The Kitchener Rangers scored twice on the power play and boasted a pristine penalty kill en route to a fourth straight win, this time 4-3 over the Windsor Spitfires in front of 7,037 fans at The Aud on Friday night.

The four-game win streak is the longest by the Rangers (11-6-1-0) this season, as the team found offence from four different skaters; Adam Mascherin, Connor Bunnaman, Greg Meireles and Mike Petizian, who potted his first career OHL goal.

After winning four straight themselves, the Windsor Spitfires (11-7-1-0) have now lost back-to-back games, and both meetings with the Rangers so far this season. Kitchener and Windsor will meet again in short order as the team’s cap off of a home-and-home tomorrow night at the WFCU Centre at 7:05pm.

Luke Richardson (5-5-1-0) earned the win in goal for the Rangers – his fourth straight victory – making 25 saves.

The Spitfires opened the scoring at the 7:27 mark when Windsor captain Aaron Luchuk buried his 19th of the season, assisted by Austin McEneny and Thomas Stevenson to give the visitors a 1-0 lead.

The Rangers looked poised to tie things up with just over seven minutes to play in the opening frame when they found themselves with a 5-on-3 man advantage for 1:37, but the Spitfires were able to complete the kill.

But Kitchener would get on the board before the period was out, as Mascherin tallied his ninth goal of the season to tie things up at 1-1 on the power play, from Joseph Garreffa and Kole Sherwood, at 16:47. 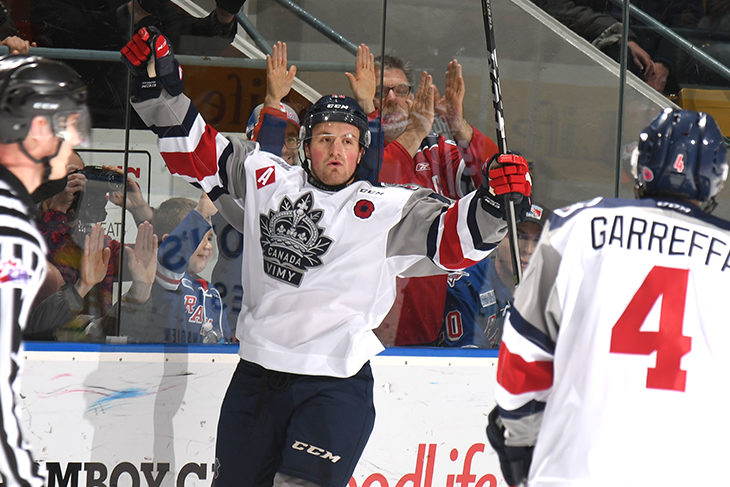 Shots on goal in the first period of play favoured the Rangers, 14-6.

Just 3:15 into the second period the Rangers took their first lead of the night on the stick of Petizian, from Nick McHugh and Jonathan Yantsis, to make it a 2-1 game.

The Rangers extended their lead to 3-1 inside the final three minutes of the frame when Sherwood found Bunnaman alone in front of the Windsor goal. It was the 10th of the season for the captain, with Rickard Hugg earning the secondary assist on the goal at 17:25. 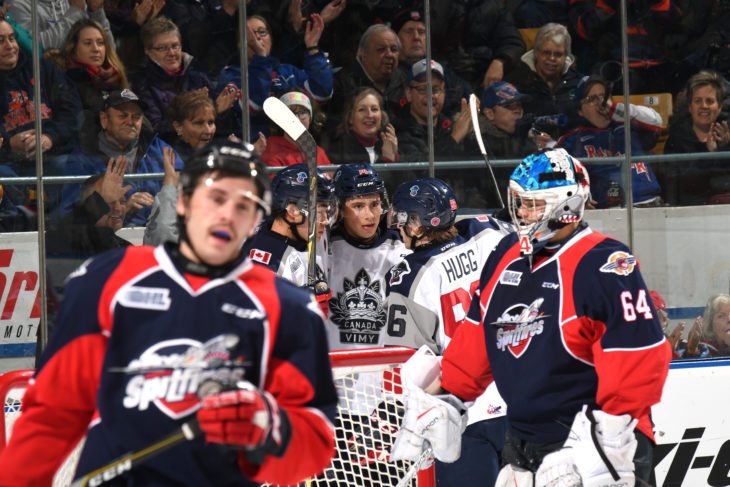 Through 40 minutes of play the Rangers also maintained a lead on the shot clock, outshooting their opponents 21-16.

Tyler Angle’s goal at 8:05 of the third period, from Sean Day and Mathew MacDougall, cut the Kitchener lead to 3-2, but just under two minutes later the Rangers restored their two-goal cushion.

With five seconds remaining in a Windsor tripping call, Meireles put the Rangers up 4-2 on the power play, from Cole Carter and Logan Stanley at the 11:00 minute mark.

But the Spitfires continued to press, eventually cutting the home team’s lead to 4-3 on a goal by Luke Boka that Richardson seemed to get a piece of, but just barely trickled past the goal line. Daniel D’Amigo and McEneny picked up the assists on the goal at 15:09.

There were some tense final moments in the Rangers’ end, but Richardson stood tall including making a game-saving stop with just 37 seconds left to play as Kitchener picked up the win.

The Rangers would finish the game 2-for-5 on the power play while the Spitfires went 0-for-3 with the man advantage.

Kitchener donned one-of-a-kind Remembrance Day jerseys for the 13th straight season, this year commemorating the 100th anniversary of the Battle of Vimy Ridge. Prior to the game, the team held an on-ice ceremony complete with a number of special guests.

Master Corporal Will Hannenberg, and Mark and Matthew Kipper marched onto the ice dressed in World War I uniforms of the 111th overseas Battalion from South Waterloo, and the 118th overseas Battalion from North Waterloo, carrying weapons and kit reflective of that carried by the soldiers at Vimy. They also carried the Canadian Red Ensign, Canada’s flag at the time of World War I.

Sergeant Darryl Casselman and Piper Corporal James Easton from the Royal Highland Fusiliers of Canada joined them on the ice and later perfomed O Canada and Amazing Grace.

Also welcomed to the ice was Dan and Debbie Dynerowicz, the parents of Kitchener native Sergeant Robert Dynerowicz of the Royal Canadian Dragoons who was killed in a training accident this past April. With Dan and Debbie was Robert’s nephew Cameron, as well as fellow Dragoons from CFB Petawawa; Warrant Officer Andrew Fenton, Sergeant Shawn Graham, Sergeant Andre Grant, Sergeant John Whitehead, and Master Corporal Jay Mitchell.

There were two ceremonial faceoffs before the game; one by Sergeant Dynerowicz’s fellow Dragoons, and the other by his nephew, Cameron. 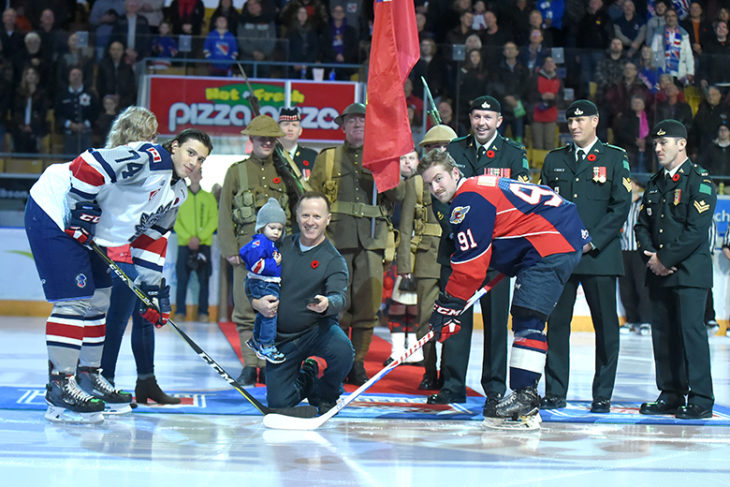 The Rangers and Spitfires play the other end of the home-and-home matchup tomorrow when the Blueshirts travel to Windsor for a 7:05pm start on Remembrance Day. Kitchener returns home to host the London Knights on Tuesday, November 14th at 7pm.