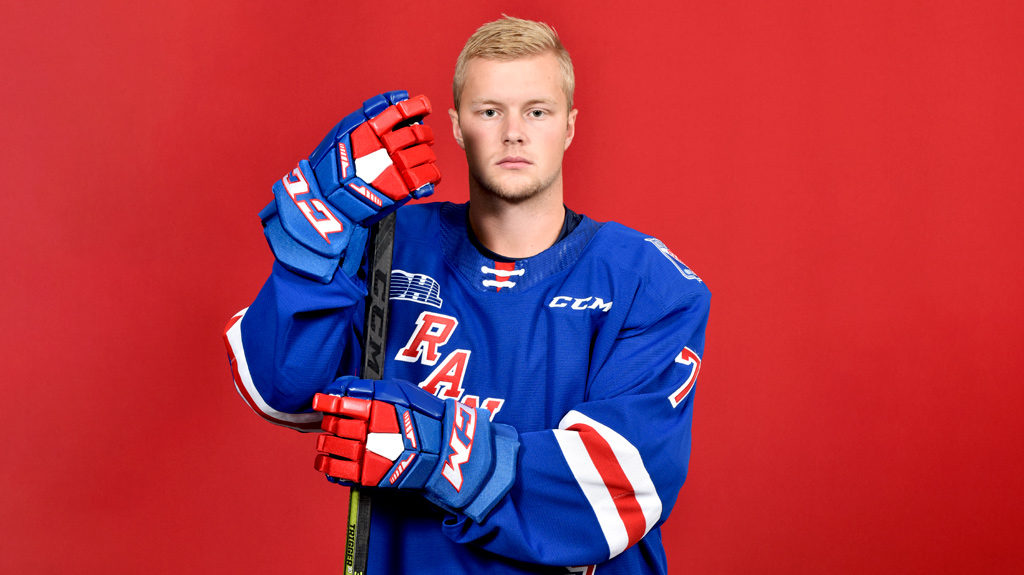 When you think of musical artists that grab the attention of hockey players these days, 70 year-old Bruce Springsteen is most certainly not among them – unless you’re talking to Rangers defenceman Axel Bergkvist.

“Springsteen is definitely up in the top three,” said the 19 year-old Swede.

Despite over a half-century age difference between himself and the American singer, songwriter, and musician from New Jersey nicknamed “The Boss”, there are a few connections that can be made – if you dig a little deeper.

One of the very first European countries Springsteen toured was Sweden, back in 1975. Naturally, the sound he brought to the Scandanavian country resonated with Axel’s father Per-Ragnar, who passed some musical tastes down to his son. Bergkvist is now playing the guitar regularly – although not nearly as well as Springsteen.

“I listen to a lot of music every day, but I actually need some new artists to listen to now. Right now, I’m taking advice from Lucas Pfiel for that,” he said with a laugh.

In a recent slight flip of the script, Canada is the first North American stop for Bergkvist – having joined the Rangers organization as one of two import players this past August.

Unlike Springsteen, who has admitted in a number of documented interviews that he was incredibly nervous leaving his homeland, Bergkvist’s perspective was the complete opposite. He was extremely excited.

Admittedly, it also helps when you come from the same country as last year’s captain Rickard Hugg.

“I spoke to him about Kitchener last spring when I knew the organization was interested in me. I just asked him the basic questions and Rickard said right away to go, if I had the chance,” Bergkvist said.

“I followed his instructions and here I am.”

And even though it took some extra time, he really started getting more attention from fans locally and around the OHL in the month of December – thanks to an 11-game point streak.

Now he leads all Rangers defencemen with 31 points.

“I think the adjustment to the smaller ice surface has helped me out. Everyone told me that it’s going to take 10, 15, or 20 games to get settled in and it really did,” he said.

“All the coaches told me just to be patient and to believe in myself and play my game.”

Self-belief also been key after being passed-over during his first year of draft eligibility after the 2017/18 season.

After spending an extra campaign with Leksands last year, he was ultimately drafted 200th overall by the Arizona Coyotes this past summer.

“I was at home with a couple of buddies. I watched the first couple of rounds but then turned my attention away from it,” he recalled.

“All of a sudden, my phone started ringing and I noticed it was my agent – so I got excited again. I answered and he told me that I had been drafted by the Arizona Coyotes. It was such an unreal feeling. Hard to describe in words otherwise.”

With the next number of hours becoming a real whirlwind, Bergkvist was finally able to discuss the news with his closest family member – Swedish hockey legend Dan Soderstrom

“My grandfather and I are really close … so it was a special moment for both of us. He was very happy and proud,” Bergkvist said.

“He called me the day after and I was already at the airport in London, England. It was an emotional talk.”

Since settling in Kitchener, he’s also been fortunate to have more talks with assistant coach and fellow countryman Andreas Karlsson.

“Andreas and I didn’t know each other before I arrived but it was pretty obvious from the beginning that we were going to develop a special bond,” Bergkvist said

“It’s really nice to have someone to talk to, especially in your native language, and we’re actually from the same home town too. Those are small things but it’s really great to have him here.”

Now that he’s feeling more comfortable with where things are heading in his hockey career, Bergkvist admits that certain personality traits have also been key to his more recent achievements.

“I think that I’m a calm guy who likes to talk in the locker room and a nice guy to be around. I also make to sure to always put in a hard day’s work at the rink.”