SPOTLIGHT: Return of Blaisdell a welcome addition to Rangers blueline 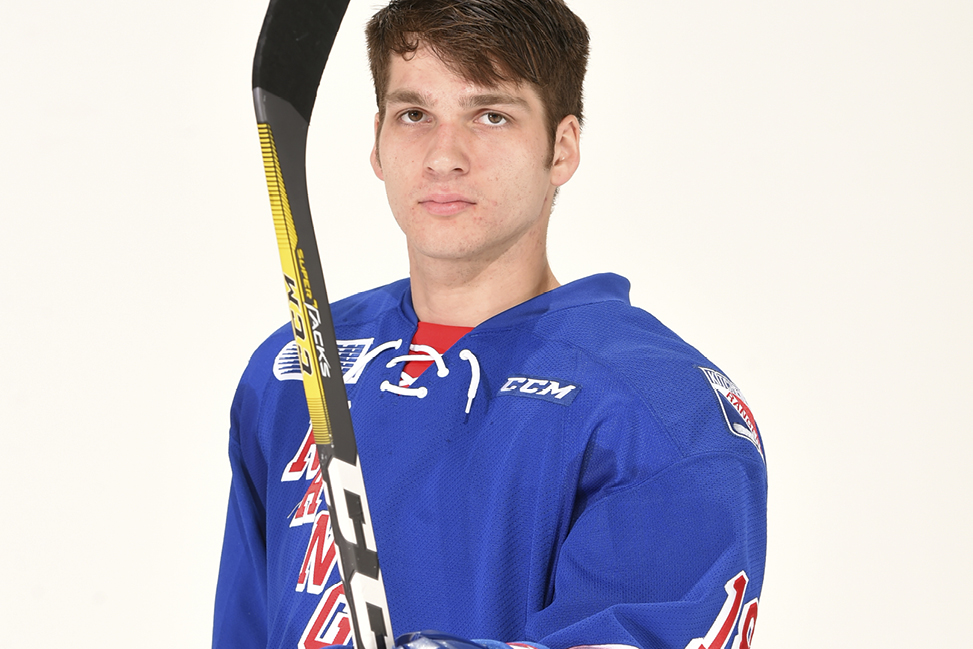 If you asked Doug Blaisdell he’d likely tell you the latter, seeing as how 266 days is the amount of time the veteran blueliner had to wait until he could return to the lineup for the Kitchener Rangers.

The now 20-year-old from Dearborn Heights, MI has endured his share of struggles over the last 12 months; in actuality, dating all the way back to the 2015-16 offseason.

Then 18-years-old, the rearguard opted for surgery on an upper body injury in a bid to cure what ailed him and come back good as new for the 2016-17 season. But as so often happens to even the best laid plans, fate intervened. As it would turn out, 2016-17 could not have gone more not according to plan for Blaisdell.

He missed the first handful of games but made his debut against the Sarnia Sting on October 7, 2016. And what a return it was, notching a pair of assists in a 6-5 Rangers shootout loss.

The Rangers and Sting tangled once again on November 2, but Blaisdell was unable to leave town unscathed as an upper body injury sustained in the game sent him back to the injured reserve; this time for six weeks.

He returned to the lineup again on December 16, 2016. He was once again sidelined on December 29 – just three games later.

That injury sustained on the 29th of December would sideline him for the rest of the 2016-17 campaign.

266 days, two surgeries and one too-long of an offseason later, Doug Blaisdell made his long-awaited return to the Rangers lineup on September 22, 2017, and he couldn’t have been more ready.

“It was a little bit hard, I will say that,” he noted, not just of the physical side to his recovery but to the mental toll it took. “I remember sitting in my room back home and just being so sore. I had just had my knee surgery, and then had my shoulder done right after, so it was tough.”

Unable to contribute to the team on the ice, he was appreciative for the times away from the rink that he was still made to feel like an important part of the squad.

“I was fortunate enough to be able to come back and be with the guys,” he said. “Things like coming for the Super Bowl party, and working out with [athletic therapist] Brandon Merli and meeting with [head trainer] Dan [Lebold], that did a lot for me. I think that helped out with building my morale.”

It’s ironic; that long wait from December 29, 2016 to September 22, 2017 seemed to take forever, but when Blaisdell reflects on his major junior hockey career – now in its fifth season – he says it feels like it’s come and gone in the blink of an eye.

“I will say, it flew by,” he said unbelievably. “Especially because you’re playing for the same team for five years. All the memories kind of blend together,” he chuckled.

He also smiles when he thinks back to some of the teammates and memories he’s made with them over the course of those years.

“I would have to say, probably the guy who had the biggest influence on me was Ben Fanelli,” Blaisdell remembers. “He was a leader in everything he did. He kept the mood in the room light and he was never negative.

“I’ll also say Liam Maaskant. He was captain during my second year. Both of those guys were just good, positive leaders.”

Blaisdell promises to cherish those memories he already has, and the ones he’s bound to make this year.

“Kitchener is a special place to play,” he beamed. “And it’s an absolute privilege to get to do that again for one last year.”

all news community
Tickets are still available to catch the first-place Rangers in action!
8 hours ago