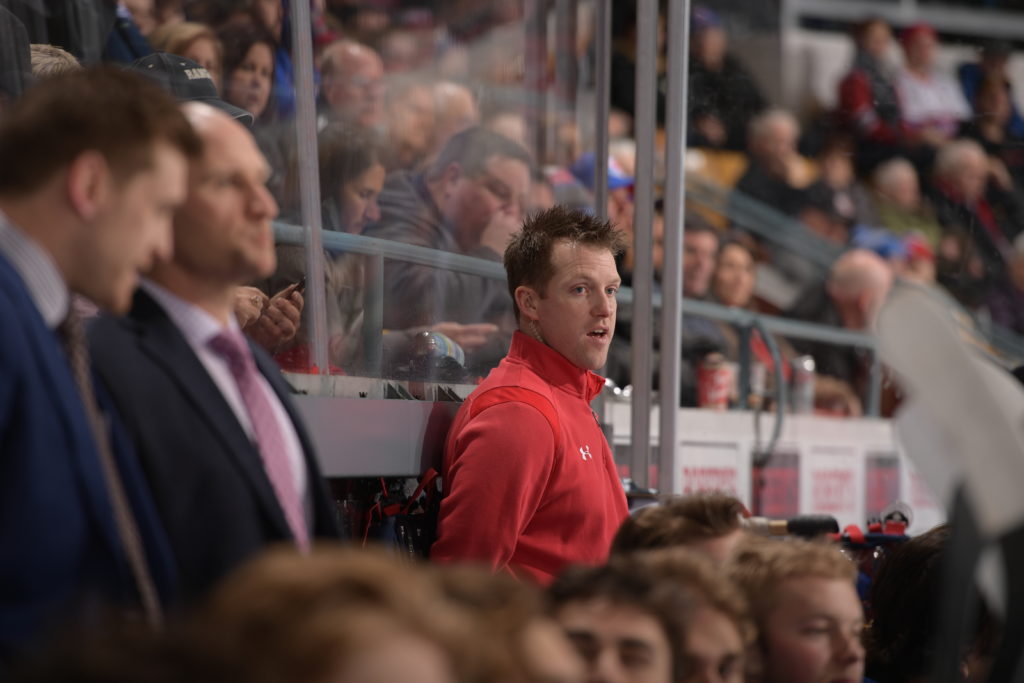 Much has been made the last number of seasons about the Rangers’ roster depth, but a recent addition to the training staff is proving to be just as important.

Athletic Therapist Cory Birk joined the organization before the start of the 2018/19 season having spent the previous nine years in the Junior B ranks with his hometown Listowel Cyclones.

During that span, the team evolved from a struggling club to winning the Sutherland Cup in 2018. The pinnacle came that same season when Birk received the Ontario Hockey Association’s (OHA) Trainer of the Year award.

“To be a part of that was really crazy,” Birk said.

“The town of Listowel deserved it because they supported the team through thick and thin. To win it for them was pretty special to be a part of.”

Birk’s good fortune continued during the off-season when the opportunity came up to work with the Rangers – a team he followed throughout his youth.

“I jumped on it and was fortunate enough to get the job. I haven’t looked back since. It’s been great,” he said.

Having also worked in a clinic as a physiotherapist for 12 years, Birk knew from the outset of starting his career that he always wanted to do something in hockey and continue in the game working as a trainer.

“It’s been a good mentorship and they’ve made the transition very easy for me,” he said.

“They have so many years of experience. I have lots at the Junior B level as well, but you can’t compare it to having 2,000 games in this league. Dan and Barry have been great to me.”

The familiar passion of the local fan base has also created an environment that he is comfortable with.

“It’s very similar but on different scales, obviously. Listowel is a very small town but it’s a hockey town as well. You can find everybody at the local rinks supporting minor hockey and the Junior B team,” Birk assessed.

“I’ve found the same thing being the case in Kitchener. Everywhere you go, people want to talk about what’s going on with the team.”

In the same breath though, it’s understandably taken some time for the 37 year-old to establish himself with the Blueshirts staff and players.

“It took a little bit coming to a new team last year. I had to learn 25 new players but I consider myself to be a very personable and approachable guy,” Birk said.

In his opinion, regular communication between himself and the coaching staff, in terms of injuries and who may or may not be able to play on a given weekend, is key to establishing that.

It also includes always being on the same page with the medical staff behind the scenes; team doctors, dentists, and orthopedic surgeons.

“It’s very important in my job to gain the trust of the players. I like to build those connections. You want them to feel that they can come to you when they’re having issues physically, emotionally, or mentally so we can address that.”

He wouldn’t have stuck it out all these years to develop that philosophy and skill-set without the support of his family, which includes his wife Missy, his eight year-old daughter Kaleigh and five year-old son Maddox.

“They’ve sacrificed a lot for me to be able to do this job and the support they’ve shown me to do something I love has been great.”