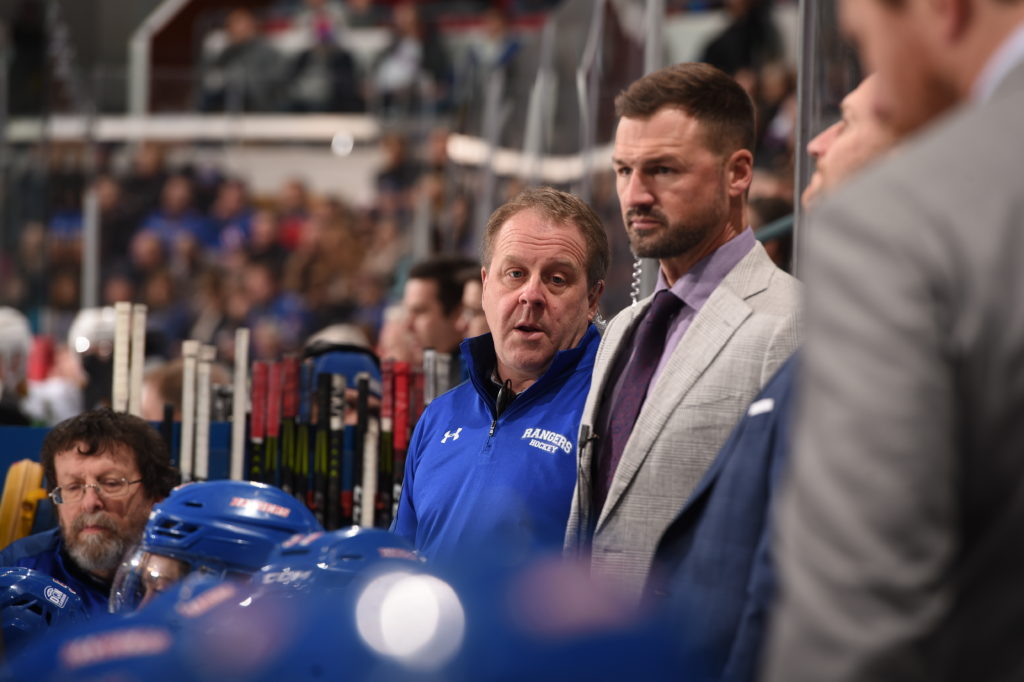 Do you ever wonder what goes on behind the scenes of a hockey team, or any sports team for that matter? At the heart of it all are the trainers. Here in Kitchener, we are lucky to have an exceptional training staff headed up by Dan Lebold.

From the preparation of the dressing room, sharpness of skates or even superstitious stick placements, trainers do it all. For Dan, this is just part of the job.

“No day is typical for me. I try to get as much done as I can the day before because there is a lot to do on game day,” said Dan. “It’s about getting the room setup and skates sharpened. Now with skates the way they are, we are changing steel all the time. We have three sets of steel for each pair of skates, so I am constantly sharpening.”

As a kid, Dan played house league hockey but never played competitively. No one in his family did either. He followed the Junior B team in Stratford, but that is about as far as it went for him. Dan had a passion for the game and knew that if he couldn’t play, he had to find a way to work within the sport.

“I was taking phys-ed biology at Wilfrid Laurier and worked with the varsity team, which lead to a job interview with the Sudbury Wolves in 1992,” said Dan.

“My wife, Marianne and I moved to Sudbury that summer and spent three seasons there with the Wolves. Then, the Christmas of ‘94, the Kitchener Rangers called me about the possibility of an opening. I tried not to jump through the phone, but I was pretty excited to have a chance to go back home. Now, here I am.”

The long hours of the job have gotten easier for Dan as time has gone on, but for him, it has been worth it.

“The long hours are easier to work when I know the boys are being taken care of,” said Dan. “I’ve often said that I want to treat these guys the way I would want my sons treated if they were away playing. Whether that is Cory and I dealing with a medical situation or making sure they have all the things they need, I’m happy to do it. Once they hit the ice the rest is up to them.”

Dan has had his fair share of memorable moments; whether it was winning the Memorial Cup or a gold medal at the World Juniors, there is one aspect that out shines them all—the people.

“The best part of it all is the people you meet,” smiled Dan. “The players who have come in and out of this door, are all special to me. I could not recount all the names, but if they walked into my office, I would know them right away. We have a saying, ‘Once a Ranger, always a Ranger’.”

Dan’s humble character speaks for itself. Everything he does for these young men is for their betterment, even if he is kicking them off the ice before the Zamboni comes on. He is there to do everything he can to help them accomplish their goal of making it to the NHL. He couldn’t be happier if and when they do, but there is another accomplishment that makes him even more proud.

“Downstairs we have a wall of guys who have played pro, but I think the wall that means more to me is the education wall,” said Dan. “It showcases the guys who went on to post-secondary school and have bettered their lives.”

Whether Dan is behind the bench with the Kitchener Rangers or on the world stage for Team Canada, he is always looking for ways to help the team win. Although, to him, winning isn’t everything.

“Winning is an outstanding feeling, but it’s the people you meet along the way and the friendships you gain that last a lifetime. I’m so happy to be part of this organization,” smiled Dan. “I call this my NHL.”