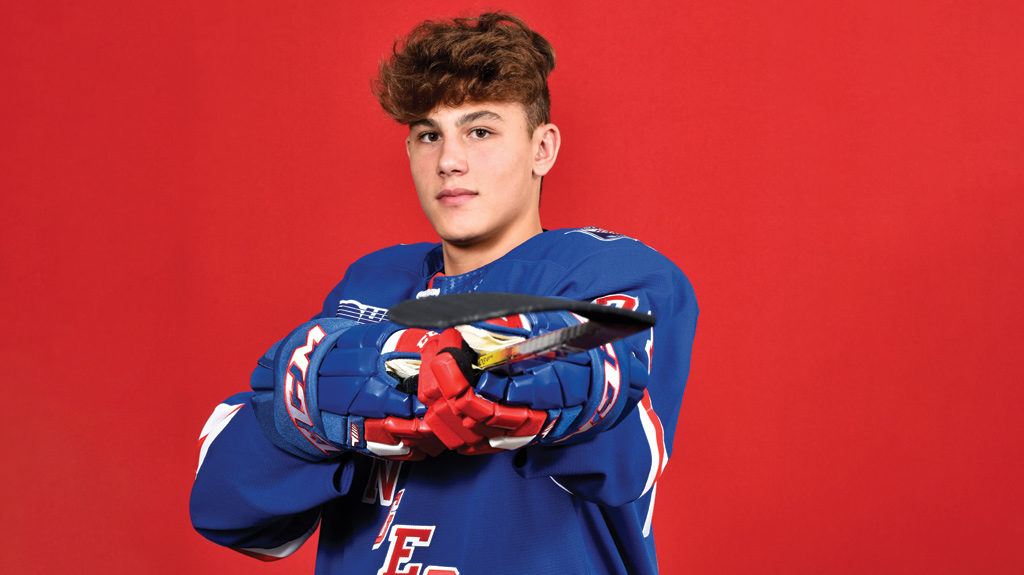 As soft-spoken as Francesco Pinelli is, the start to the rookie forward’s career has been far from a quiet one.

Having already shown a natural ability to put the puck in the back, he is just as adept at crediting his teammates “for helping out”.

“I wouldn’t be having this good start if it wasn’t for them encouraging me to do the best I can,” said Pinelli, the Rangers’ 13th overall pick in the 2019 OHL Priority Selection.

The veterans in the locker room put his nerves at ease right from the get-go, because he was slotted on the top line by Head Coach Jay McKee since game one.

“I was kind of surprised when they put me on the first line, but I guess we’re doing pretty well as a unit right now. We’re winning at home already and we want to keep it going,” he said.

“Our captains, Greg and Dammer – they’re both my locker stall partners and they give me a lot of tips and stuff I can work on. They’re great guys.”

Getting that sort of trust so early in his career is due to his on-ice strengths – such as his natural instincts, skating, and playmaking.

“I think I have the ability to keep up with the quicker pace of the game while being smart with the puck at the same time,” he reflected, before deflecting praise once again to his new teammates for making him feel comfortable in his new surroundings.

“Just the speed that they play at and how smart they are is impressive. They can find me wherever I am on the ice and it’s just pretty awesome to play with them,” said the 16-year-old Stoney Creek native.

A creative player, Pinelli has shown quick hands, created passing lanes, and shown an ability to thread passes through traffic. That’s something he can attribute to his time weaving through numerous bodies on the soccer pitch as a midfielder and striker.

“I used to play soccer back home. I played rep with my brothers too. It’s a great sport and it also helped out with my cardio. That’s why I played it as well as hockey,” he explained.

Having spent time with the Cardinal Newman Cardinals high school hockey team, he transitioned to play for the Toronto Red Wings during the 2018-19 season. It was with the Red Wings that he recorded 49 goals and 65 assists for 114 points in 71 games played.

He had seven goals and 14 points in seven games at last March’s OHL Cup as well before being named to the 2019 Gatorade OHL Cup All-Star Team by OHL Central Scouting.

For Pinelli though, it wasn’t the personal accolades that stuck in his mind. It was the fans.

“It was pretty awesome playing in front of all of them. Our team also played really well. It was a good experience for sure,” he said.

The exposure to a larger viewing audience – including a nationally televised broadcast of the final on Sportsnet – turned out to be good preparation for taking to the ice in front of a rabid fan base in Kitchener.

“Just to play in front of Rangers Nation, it’s a great feeling,” he reflected.

“So far, it’s been a really good experience here.”

Prior to arriving in Kitchener though, Pinelli was an invitee to Hockey Canada’s U17 Summer Development Camp in Calgary – and it was an experience he won’t soon forget.

“To play with all those players from all around the country was a pretty good experience. And just to meet new coaches and staff was awesome,” he said.

Having arrived in earnest, Pinelli admitted that it was tough to predict if his hot start to year one will continue, but he assured that he is committed “to help the team out as much as (he) can to help the team win.”

“I think we’re a really good team. We’re going to win a lot of games and we will hopefully do well right to the end.”