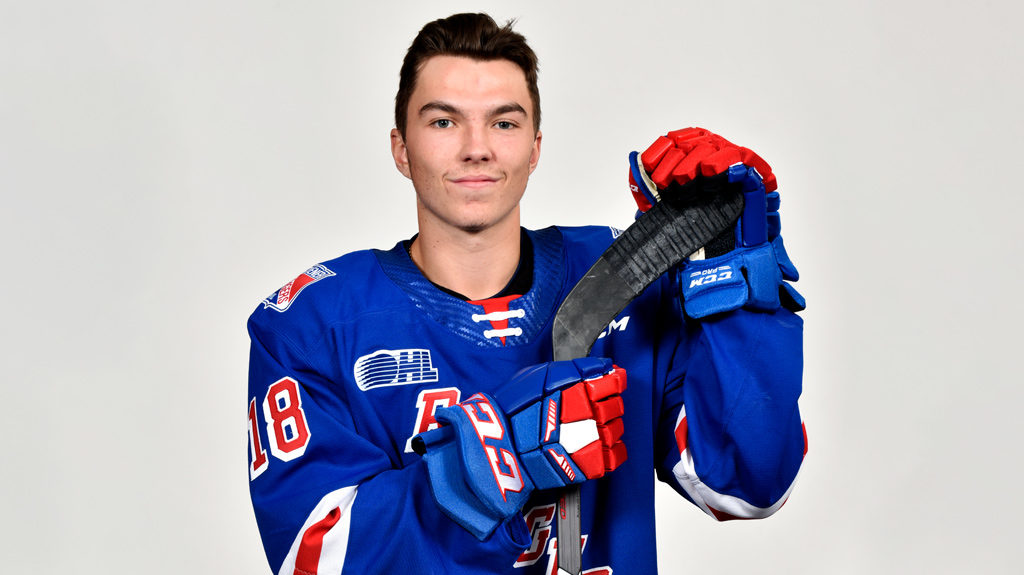 The way Graham Dickerson describes it, his pursuit of an OHL roster spot has essentially been a modern-day version of the original Rocky movie.

Drafted by the Rangers in the 14th round (272nd overall) in the 2017 OHL Priority Selection, Dickerson had a tough hill to climb right from the outset.

“I had to work harder than anyone else. I needed to do more to get my name out there,” said the Port Hope, ON native.

“Almost being looked past in the draft, I had to show the organization that I deserved to be here.”

So, Dickerson did the only thing that was in his control: he worked out – and hard.

“Any workout I would do then or even now, I make it explosive,” he explained.

That would also include regularly running sets of sprints up a well-known flight of stairs in the middle of his small hometown – not unlike how the fictional Rocky Balboa did before his big fight.

In competition with other players also vying for a regular appearance in the Blueshirts’ line-up, the mantra that played in his mind was “Kitchener Rangers: I’m coming for ya!”

“And then, it happened – which was great,” said Dickerson.

From spending a season in the Junior C ranks with the Port Hope Panthers then moving up to play 17 games with the Junior A Whitby Fury (recording eight goals and 13 points) last year, he finally got the call from the Rangers and signed an OHL Standard Player Agreement on October 30th, 2018.

In 43 games with Kitchener, he finished with three points and tallied his first career OHL goal on February 21st against the Niagara IceDogs.

“When I got the phone call, it was like a weight off my shoulders. It felt like a movie. All my hard work finally just paid off knowing that I’m going up to the big club,” Dickerson reflected.

“It’s been a wild ride. I’ve often thought about how I was playing Junior C and then, all of a sudden, I was in the OHL. This is what I’ve worked for,” he said.

From his perspective, the reasons the organization reached-out to him to put pen to paper were three-fold.

Although he’s only listed as 6’0 and 185 pounds – on a smaller-sized roster overall – Dickerson is willing to throw his body around on the ice to generate a spark for his team at crucial times.

“We’re going to need some players to step-up and make big hits to get the boys going. I’m trying to get in that role,” he said.

Dickerson is quick to credit his parents and his older brother Drew for instilling the work ethic in him – which has evolved into a pinpoint focus on his career goals.

“My parents always told me, “You’re going to do it – but it’s not going to be easy and you have to get your mind right and focus on the goal at hand.”

And whether it’s pairing up with him in the gym or on the golf course, Dickerson praised his brother – who he described as his “best friend” – for always pushing him to reach his goals.

“I definitely give props to him for doing that,” Dickerson said.

Now he’s become more of a household name among Rangers fans but that hasn’t stopped Dickerson from setting even bigger goals – which includes a future invite to a pro (and preferably NHL camp).

In the meantime, though, his sights are set on getting a title for his current team.

“Hopefully we go on a good run and get to that championship series.”