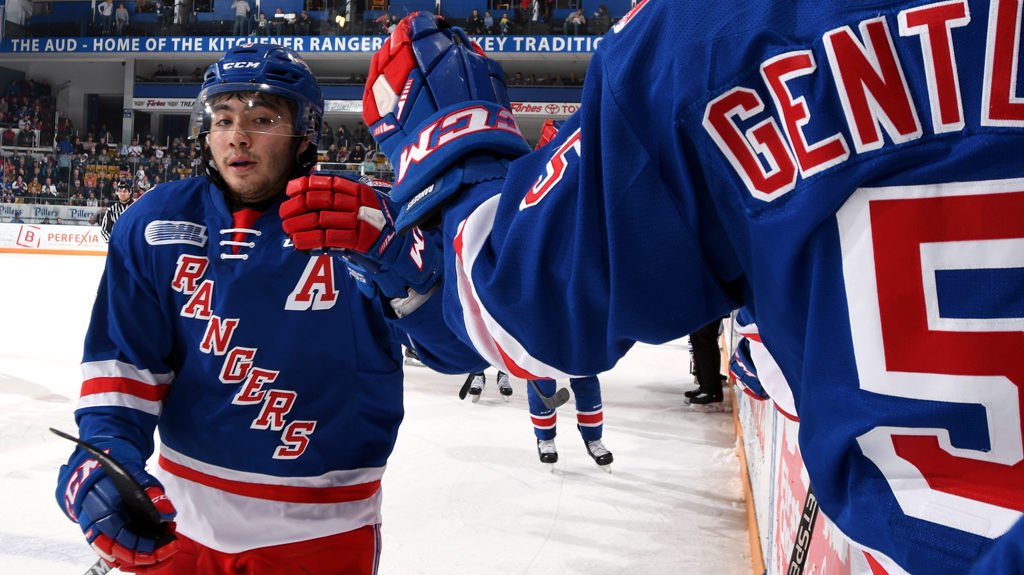 If there is one thing Rangers fans know, it’s that Joey G can skate. Growing up, Joe took power skating classes to build his stride and speed, but he had a bit more of an unconventional approach that separated him from the others—figure skating.

“I did a bit of figure skating for a couple years, and that really helped with my edge work. I still work on those same techniques, which has helped with my skating ability,” said Joe. “I think my speed is more hard work than skill, though. I am always in the gym and keeping my leg strength up. If you stay light, you tend to be quicker. The harder I work, the faster I feel.”

Coming into this league four years ago, was a bit of a change for the Toronto, ON native. Going from being the top player on his team, to sitting games really helped Joe grow as a player and as a young man.

“Going back to my first year, I just wanted to be ready for when the coaches called me to step up. That season was a big eye-opener for me. You come into this league as the top player on your former team, and now you don’t really get to play. It is a learning moment, and it helps you grow,” said Joe. “You have to earn your rights. That mentality stuck with me because I am still working just as hard or maybe even harder than I did back then.”

With growth comes confidence and for Joe, that was the case.

It’s evident that he has a sort of swagger about himself when he plays, but the minute he steps off the ice, you see a humble, yet confident individual. This was something Joe has always strived for.

“When you’re confident in what you do, I think that helps a lot. You have to have that little bit of swagger and edge in your game,” smiled Joe. “While it’s important to have that edge and swagger, you always have to be humble. Use that confidence to up your game, but always remain humble and don’t let your ego get in the way of the success of the team.”

Joe has elevated his game, both on the score sheet and in his leadership role. That elevation has come with his level of consistency. This season, Joe hit a significant milestone—200 consecutive OHL games played. It’s not an easy feat, but with hard work and strength, Joe has become an iron man in this league.

“As an older guy this season, I am taking more of a leadership role. This year I have really had to step up and elevate my game a bit. We lost a lot of offence, so I had to do a lot more offensively,” said Joe. “I looked up to a lot of the older guys last year. I watched the way they played and wanted to emulate their confidence level into my game, and I think I have.”

Joe is known amongst Rangers fans as a fan-favourite. That isn’t something that comes naturally necessarily, it takes hard work and effort. Joe is always willing to go out into the community and interact with his loyal fans. Joe chalks this mentality up to how his parents raised him.

“My parents have always instilled a lot of good things in me and brought me up the right way, and I think that plays a huge part in where I am today,” smiled Joe. “They would always drive me to the rink growing up and helped me grow. I really can’t thank them enough. They really kick-started my career.”

Next season, Joe will enter into his overage year. If Joe knows one thing, it’s that he won’t stop playing the game he so deeply loves.

“I am confident I am going to be playing pro hockey once I leave Kitchener no matter where it is,” smiled Joe. “When you’re having fun, you play better than when you’re holding your stick too tight or getting too hard on yourself. I am just going to keep working and enjoying the game.”