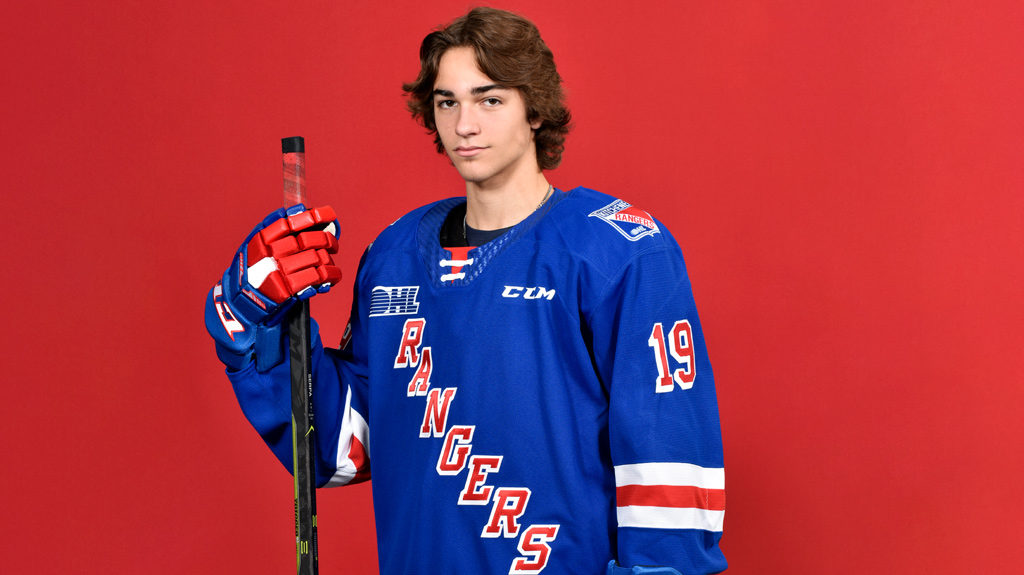 Joseph Serpa officially made the Blueshirts’ roster this season, but he’s still perfectly content with being recognized as a blue-collar player.

Drafted by Kitchener during the fourth round of the 2018 OHL Priority Selection, and currently listed at 5’10” and 146 lbs, the lean forward had to prove that he could co-exist with the bigger bodies in the junior ranks.

Once he finished playing four games in the pre-season, he saw action in nine games with the Rangers in 2018/19 season as an emergency call-up. “Even though I wasn’t a full-time Rangers player last season, I still learned a lot. I got to know everyone that’s a part of the organization,” Serpa said.

“I was never upset about it. The organization put a lot of faith in me, and I was excited to come up to the Rangers when I finally did.”

Serpa spent most of the season with the Jr. B Waterloo Siskins instead, which made for a smoother transition into being the OHL regular he is today.

“I was thankful for the experience with the Siskins. It was a great year being with a veteran group. They really taught me the ropes of junior hockey,” he said.

The Cambridge, ON native continued to learn the ins-and-outs of what it takes to compete at a higher level and playing on the eventual Sutherland Cup-winning squad provided a real test of endurance.

“It helped me a lot. We played series after series, and each one was going to game seven,” Serpa said. “Just advancing deeper in the playoffs and experiencing the intensity was important.”

You only need to take a look at the numbers to see Serpa’s growth. In 40 regular season games with Waterloo, he recorded 18 points. He almost matched that offensive output in the post-season with 14 points – in twelve fewer games.

“By the end of the season, I think I had everyone’s trust on the team so that they could put me out on the ice in critical situations,” he said.

“It was a boost for my confidence when I finally came here knowing that I could play in big moments.”

The 17-year-old feels that extra boost – plus his strong work ethic – caught the eye of the Rangers staff coming out of training camp this season to earn a roster spot.

“I come to the rink ready to go every day, and I think the coaches and everyone else on the team notices that. When I get an opportunity to get on the ice, I work my hardest and do my best,” Serpa said.

“My playmaking ability has always been my number one focus. Now I need to shoot the puck a little more, but I think those opportunities will come again.” Serpa had that gut feeling something special would happen a week before Christmas, before puck drop in Owen Sound.

As the lone rookie on the roster yet to score his first career OHL goal, Serpa admitted that he came into that game telling (former teammate) Ryan Stepien and a few guys on the bench that he would be scoring that game.

“The first shift my line went out, it happened. It was a good feeling getting it off my back and scoring my first one in the OHL.” He reflected on scoring what also turned out to be the game-winning goal in a 3-0 shutout road victory.

Considering how hard he’s worked to get to where he is now, Serpa recognizes the value of just enjoying the moment.

“I’ve been coming to Rangers games for years as a kid. I know what it’s like to be a fan and one of those kids at the glass waiting for a puck to be tossed to them,” Serpa said, naming Ryan Murphy as his favourite player during his childhood.

“When I’m out there now, it just brings another level of how much I appreciate being here. I remember the times fondly when I came to the games with my parents so, when I get an opportunity to do something for the fans, it’s a great feeling for me.”