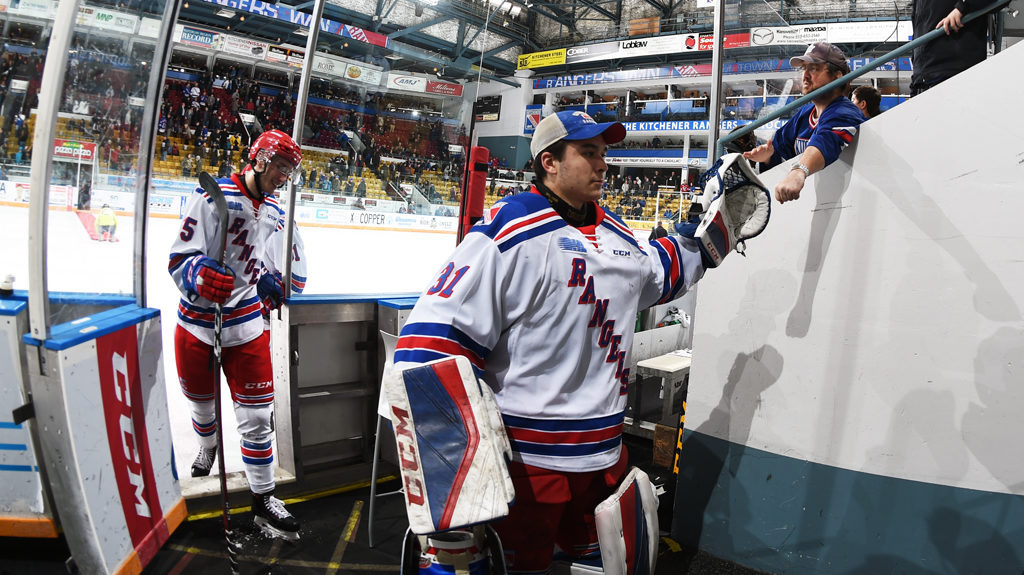 Lucas Pfeil and Luke Richardson have more in common than both being goalies— they love bugging Jonathan Yantsis.

“Richie, Yants and I go out for breakfast pretty much every day. We get along great,” said Lucas. “Richie and I both love to make fun of Yants.”

Having a positive relationship with your goalie partner has a significant influence on a goalie’s career. Pfeil and Richardson are lucky enough to have created a bond together. As a younger player, Lucas looks to Luke for guidance and support.

“I’ve learned a lot from Richie. He is always there to support me no matter if I’ve had a good or bad game,” smiled Lucas. “Same goes for him. When things are going right for Luke, I’m his biggest supporter. I love seeing him play well. We have such a good relationship, and I feel lucky to have that.”

Another commonality between the two is their appreciation for goalie coach, Kain Tisi.

“Kain is great to Richie and me. He is always the first guy to talk to us after games no matter if we did good or bad,” said Lucas. “Over the Christmas break, Kain was sending me video and stuff. You can tell how passionate and dedicated he is. I see myself keeping in touch with Kain later on in life and looking to him for advice.”

Playing for a coach who supports you is motivation to push even harder to make them proud. Lucas didn’t stop working during the break.

“I went to the gym every day. I think it’s good to get off the ice for a bit to regroup and give the body a bit of a break,” said Lucas. “I’m looking forward to hopefully getting some more starts, and help turn things around and get some more wins in the second half. I think we are going to show how good we can be and surprise some teams and make some noise.”

That they did. The Rangers are currently 3-0 to start the second half. In his first start of the second half, Lucas backstopped his team to a 6-2 victory on Saturday in his hometown, Owen Sound.

Family has always been a big part of Pfeil’s life. Growing up his parents were always his biggest supporters— even when he wanted to switch from player to goalie.

“One summer I begged my dad to buy me goalie equipment so I could go to this hockey camp as a goalie. He was trying to hold off on buying me the gear because he could see I wasn’t 100% sure either,” laughed Lucas. “Every single day that summer I begged him for the goalie gear. Then the day before the camp he came home, and he had the gear, and here I am.”

Learning something new has always been of interest to Lucas. Whether it be a new position in hockey, or taking a class he knew nothing about, he would always put in a full effort.

“I love learning,” said Lucas. “I would say my biggest goals are to play professional hockey and get a University degree. I took a couple of courses at Laurier this past semester, and they went well. It’s tough sometimes to balance hockey and school, but it’s nice to be able to play and get my education.”

Pfeil’s passion and positivity are contagious and are something young hockey players should learn to adapt.

“My advice to young goalies would be work as hard as you can. It’s tough being a goalie, and sometimes you can feel alone out there, separated from the team,” said Lucas. “Work on all the technical stuff when you’re younger, and as you get older, things will start getting easier. Work hard and have fun.”