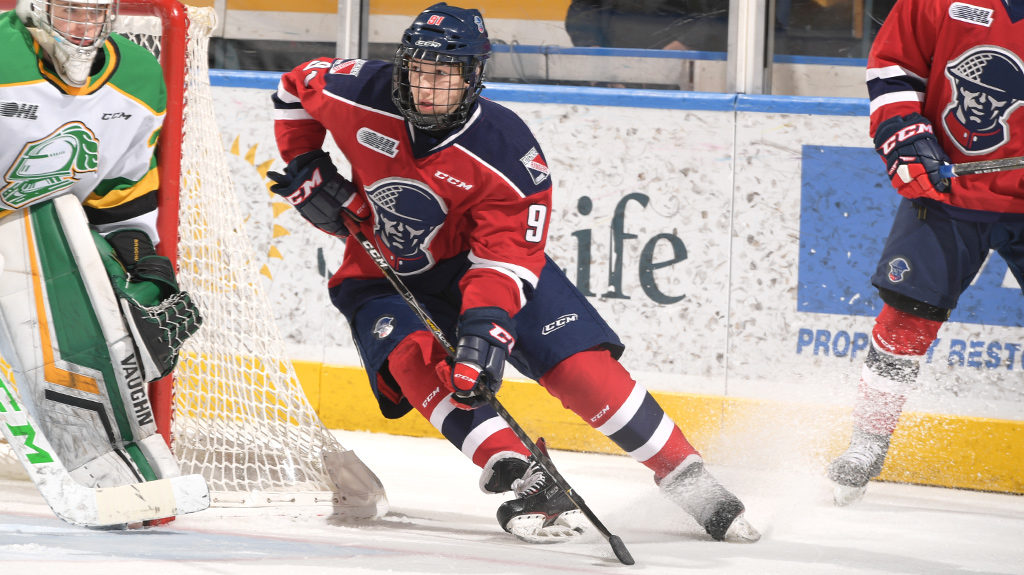 The hockey career of Matthew Sop has come full circle.

Born and raised in Kitchener, the 17 year-old left winger lived the first part of his dream by getting drafted by the team he followed religiously throughout his childhood.

“It was pretty surreal,” Sop said about getting the congratulatory call from the Rangers during draft day last spring.

Up until that moment, he had been playing video games to try and relax before being selected in the seventh round (135th overall) of the OHL Priority Selection.

“My parents were going pretty crazy and everyone was really happy for me.”

Simply put, being selected by his hometown team is “an honour”.

“Growing up in Kitchener has been amazing. It’s a great city and special going to The Aud with all the fans on a Friday night,” Sop said while reflecting about his weekly trips to East Ave.

“I remember going to games almost every weekend with family or friends up until the start of this year,” he said.

“I would always watch Darby Llewellyn really closely. He was a good, gritty player for the Rangers that could do a lot of different things well.”

Before Sop had a chance to contribute in the same way, the organization made the decision to have him play a season in the Ontario Junior Hockey League (OJHL) with the Mississauga Chargers.

To say that the 5’11”, 150 lb forward rounded out his game would be understatement. Sop lit up the OJHL as he tallied 48 points (23 goals, 25 assists) and finished second on the team in scoring.

It came as no surprise when he was named to the OJHL’s all-prospects second team.

“The OJHL is a great league. A lot of good players come through there – whether they end up in the OHL or NCAA,” he said.

“My coaches and teammates really helped with my development. It was a great year and I think I made the most of it.”

When the Chargers’ playoff run came to an early end, he was called up to practice with the Rangers. With a couple of injuries and suspensions combining to play a factor with the Blueshirts’ roster, Sop got the nod to start his first game.

Like the players he watched throughout his childhood, he would get to officially pull a #91 team jersey over his head.

“When I was walking out of the dressing room, I was a little nervous and jittery,” he reflected about the pre-game before taking on the Attack in Owen Sound.

Sop took to the ice first for a solo lap, which is the rite of passage for rookies in their first career game.

“It was an awesome experience to get that lap around the ice. I just didn’t want to fall or do anything embarrassing,” Sop said with a laugh.

Making the night even more memorable was recording his first career point on Liam Hawel’s first goal of the game for the Rangers.

His second career game stands out in his mind even more though, as he suited-up against the London Knights before a sold-out crowd at The Aud.

“I had all of my family out who couldn’t make the trip to Owen Sound. Having all those people I know in that rivalry atmosphere was special,” recalled Sop.

“The Aud’s an amazing place to play and, from watching games there to now playing on the ice, it’s pretty special.”

He fully intends to add to the excitement in the building by winning over the fans with his style of play.

“I’m shifty and have the offensive ability to put the puck in the back in the net and get the crowd going a little bit.”

In the face of a situation that some might find intimidating, Sop admits that his situation has been a little different to adapt to. But he has started to settle in.

“I’ve never played for two teams in a season before. I’m getting more comfortable at this level, so it’s been a lot of fun so far.”