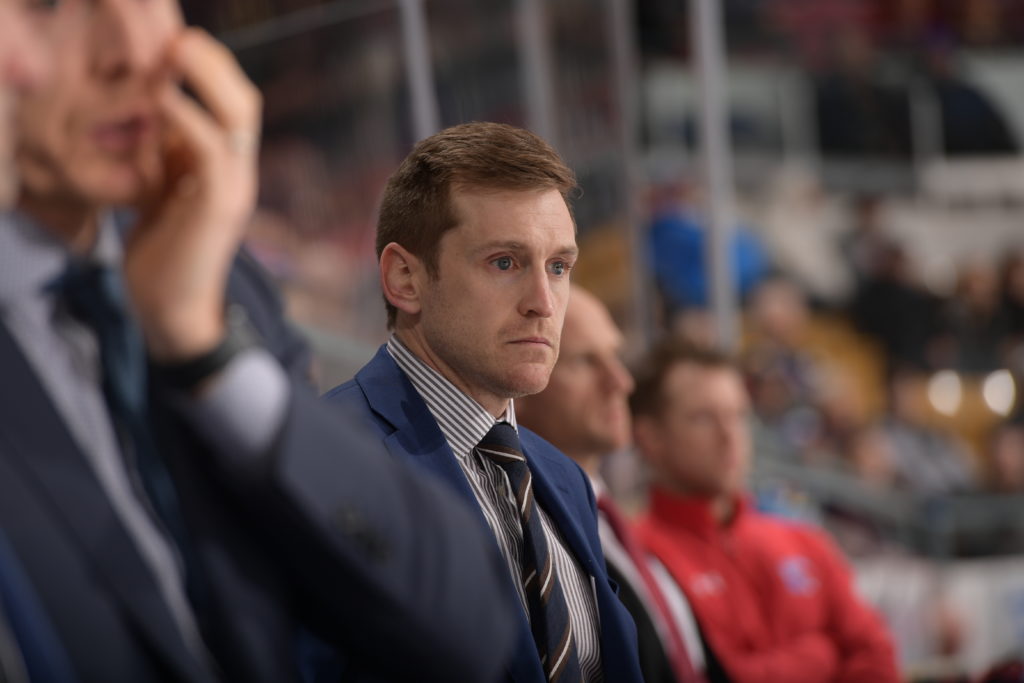 It’s been a team effort on and off the ice this season. The Rangers have climbed from last place in the conference into a battle for first.

Rangers general manager and interim head coach Mike McKenzie admits that it’s difficult to “give 100% to both jobs, but I’m lucky to have people like Dennis (Wideman), Andreas (Karlsson), Brandon (Merli), and Kain (Tisi)”.

He adds that they often “pick up the slack when I have to miss a practice or can’t be around as much,” McKenzie said, reflecting on the dual-role he took on in late November.

“On the management side, I’m lucky to have Murray Hiebert and Mike Zsolt helping when I have to be doing the coaching duties,” he said.

“Without those guys, it’s impossible to do. It was definitely a difficult transition at first but … it’s been pretty smooth since then.” The transition from GM to GM/Interim Head coach was made smoother due to his relationships with the players.

“I have a good relationship with every guy on the team just because every single one, aside from maybe one or two, has been drafted, traded for, or signed in the last three years,” he explained, adding that “now that I’m with them every day, it gains trust and they know who you are or what you’re like. It’s made the transition a lot easier.”

According to McKenzie, the game is “definitely different from what it was five, ten, fifteen years ago,” and it has “evolved so that the players want regular communication and want to know why they need to be doing what’s being asked of them.”

“That’s probably our biggest job as coaches, explaining the reason for everything we do. We don’t just throw stuff at the wall and hope it sticks. We try to explain things to the guys to reinforce that there’s a purpose to everything we do.”

Helping to develop each individual regardless of their career path is also essential.

“Ultimately, the goal is to win hockey games, but, on an individual level, it’s to get them better every single day. Over two or three years that adds up, so when they leave here, they’re better hockey players and people overall.”

A small but impactful group of players that has him pleasantly surprised is this year’s rookie class. In comparison to first-year’s on other OHL teams, they have accumulated the second-most points total as a group.

“We’re excited about what we have going now but, when you look down the road, the future’s bright,” said McKenzie.

Speaking of the future, not only do the Rangers have the postseason to look forward to, but this year’s OHL Priority Selection is scheduled for April 4th.

“The draft is something you look forward to all year long, so, as it gets closer, you get more excited for it,” he said.

“At this time of year, it’s essential to prioritize what action is needed at each specific moment.There are certain days where the coaching is the primary focus and other days when I focus on watching video on eligible draft guys or making phone calls to agents and parents to get more information on prospects.”

Ultimately, he wouldn’t be able to do any of that without the support of his wife, Andi.

“There are many hard days at home that no one else sees except her – especially when you have two kids that are two and under running around and there’s not much help,” he said about raising their daughter Blake and son Gunnar.

“My job’s not a standard 9-5 where you have the weekends off. Between the home and road games and the scouting, there’s not much time at home during the season,” he said.

“I think that’s what people forget a lot of the time. The wives, girlfriends, and families sacrifice a lot for us to be able to do this job that we love.”

“I appreciate it, and I think everyone on our staff appreciates what their families do for them too.”