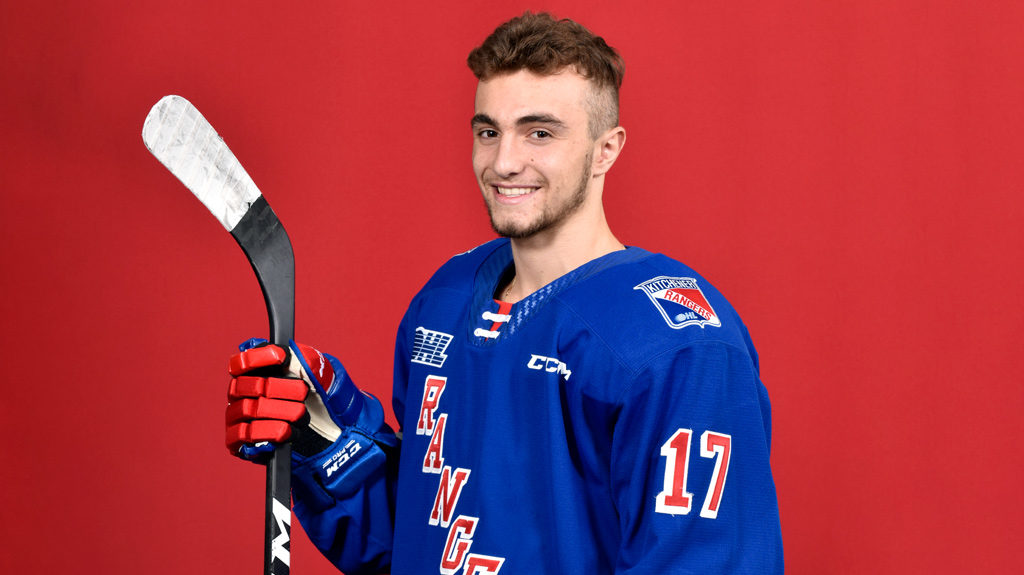 Petizian is raising the bar for himself and his teammates

As far as Mike Petizian’s check-list goes, he has already accomplished a few of his personal goals.

Get a chance to play a regular shift in the OHL? Check.

Play with Adam Mascherin, who was someone he aspired to be like on the ice? Done.

More achievements have already come to fruition in his third season with the Rangers, while others are still a work in progress. But that’s always been a part of his personal story.

“As a kid, my dad instilled in me an “always win” mentality, so I’ve always tried to be the best version of myself,” the 18-year-old said.

For Petizian, this means that there’s less margin for error in his game.

“There’s definitely not a lot of wiggle room. A couple of bad games and you’ll get demoted or something like that. It’s happened to me before, and I don’t like it, so I’m always going to be trying my hardest when I’m on the ice,” Petizian said.

How he has spent his time off the ice has been crucial to his development.

“I’m trying new things, like … what kinds of food will give me an extra jump in-game,” Petizian said, adding, “Stretching and watching video are two things I never did coming into this league. Now I’m doing it a lot, and I think it’s benefitted me.”

All of these changes come after a sophomore campaign where he got off to a prolonged start, as he worked his way back into game shape following off-season surgery.

“Last year, coming back after the surgery, I was pretty much off the whole summer and not doing much aside from working on my shoulder,” he explained.

“It was tough not being able to train … and I struggled the first half of the season, but things improved. I got placed as a winger on a line with Greg (Meireles) and Yantsis, and things got better throughout the season.”

With nine points through 18 games in 2019, he is quick to acknowledge that this year has gotten off to “a pretty decent start.”

“My defensive game has got a lot better. Jay (McKee) has trusted me against the other team’s top lines. I know he trusts me in those last moments of a game,” the Mississauga native said.

“I’m more comfortable, in general, on the ice than I was in my first year … and generating a lot more offence.”

Having been selected 92nd overall by the team in the 2017 OHL Priority Selection and then being able to transition to a leadership role in the dressing room today, is in Petizian’s assessment the result of his desire to prove the naysayers wrong.

“Some scouting reports were saying, he will make a great college player and not to knock college hockey – which was something I was legitimately looking at – but I was being written off as an OHL player just because I was too small.”

“That really pushed me to prove people wrong and to play in the “O” in my first year, even though I was a fifth-round pick … and I did,” he said.

With his determination now bleeding through to every practice, the coaching staff is taking notice and even gave him the “A” a few times this season – beginning with a road game in Ottawa.

“I walked in the dressing room and didn’t even notice it until Vuks (Michael Vukojevic) came in and said to me, “Oh, heavy shoulder, eh?” Petizian recalled with a laugh.

“I looked back and there it was. I thought that was pretty neat.”

Something else he wants to see before the year is out is an improvement on the stat sheet too – specifically, doubling his points total from a season ago, all while playing a shut-down forward role.

“I think fans appreciate the fact that I’m small but play a really gritty game. It would be nice to put up a lot of points this year, but I’m just going to worry about the little things first, and everything else will follow.”