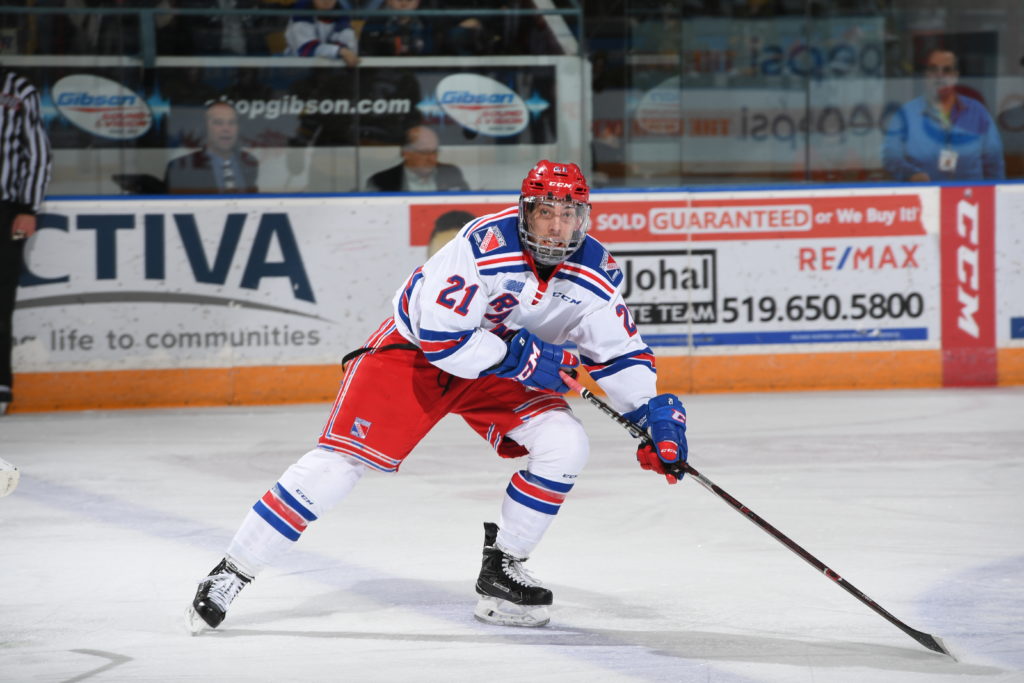 Injuries= setbacks. Unfortunately, they are part of the game. Whether you pull a ligament, break a bone or—in Nick McHugh’s case— break your jaw it is difficult to not only physically come back, but more so mentally.

“It really sucks to have an injury, especially one like that. It’s not like I hurt my legs and I couldn’t skate. It was more of a mental injury,” said Nick. “It’s really tough to watch the team play. I just really wanted to get out there to help them win.”

During the Rangers’ October 19th game against the Guelph Storm, McHugh took a puck to the face—not while on the ice, but while on the bench.

“I ran to the dressing room, and there was blood and teeth everywhere. The team dentist brought me into his office I started having a weird pain in my jaw,” said McHugh “I went to the hospital to get checked out, and they found out I had a broken jaw. I had surgery the next morning and got a metal plate put in. I was wired shut for a month and a half, and I was on a liquid diet.

Imagine trying to not only recover from an injury but having to also change to a liquid diet. Keeping a positive mindset in that situation can’t be easy, but “Q”—as the boys call him—found a way.

“The most important part is to stay positive,” smiled Nick. “You are going to have those tough times where you get injured, but you have to stay positive. Don’t try and jump back in too fast, and take it step by step, day by day and hopefully, you can get back out there soon enough.”

Not being able to eat any food, Nick had a couple of favourite liquid meals he would choose from, but he had one, in particular, he leaned towards.

“I went on a lot of trips to McDonald’s for chocolate milkshakes. It was my go-to.”

Having someone who is empathetic to your situation can help in a circumstance like McHugh’s. For him, having Rangers alumni, Mike Davies, as a support system has been a huge help. Davies went through a very similar injury to Nick’s back when he played for Saginaw.

“I went over to his house and we had a nice chat a couple of weeks ago. He was showing me pictures, and we talked about his experience with his broken jaw. His was a lot worse than mine,” said Nick. “He told me to stay strong and that at times it is going to suck, but keep your head up and stay positive.”

Davies is currently a member of the Wilfrid Laurier Golden Hawks Men’s Hockey Team and has recovered from his injury. When Nick was starting his recovery process, being able to see that Mike had recovered and is back playing gave him some hope that he would get back as well.

That he did. Since coming back, Nick has had eight points in seven games and has a little more of a jump in his step.

“Being out for so long you start missing the game. I feel like since this happened, I’m playing with more energy,” smiled Nick. “You don’t know what you have until it’s gone.”

Nick is more than happy to be back with his Rangers family and is excited to see what the rest of the season holds.

“It’s tough when we are not winning, but the coaches always tell us to stick to the simple stuff and don’t try to do too much,” said Nick. “Everyone needs to play their game, get pucks to the net and I think it’s going to turn around for us.”