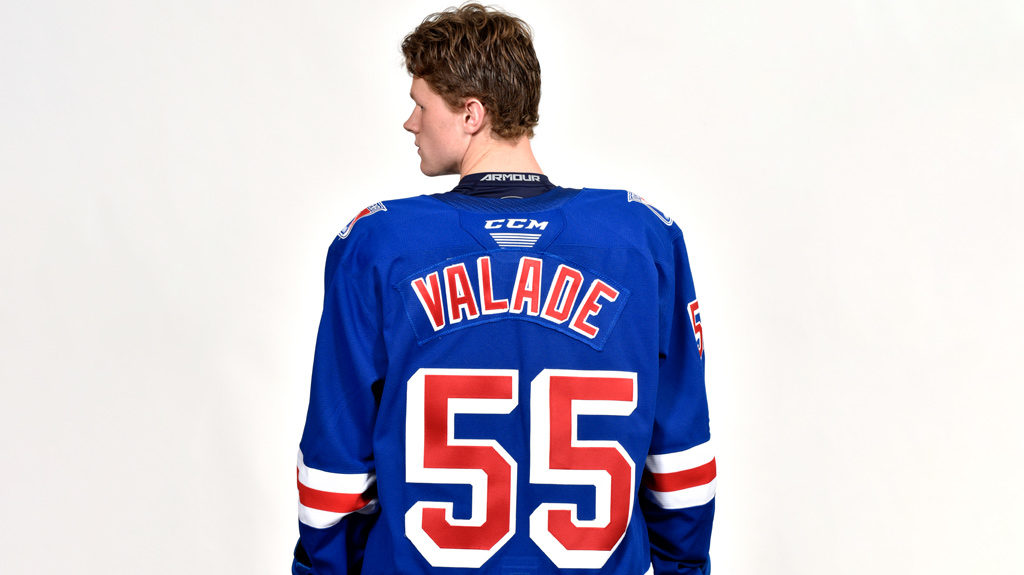 Any time a team welcomes a new player into their “family”, it might come across as a little cliché. In the case of second-year forward Reid Valade, it’s been especially fitting for him to welcome the extended Rangers family into his life.

“My family has been a huge part of my career, and not just my direct family. My aunts, uncles, and cousins have all been involved,” Valade explained.

“We’re always at each other’s games supporting each other, so it’s always been something that’s very important,” said the 17 year-old.

Born and raised in Caledon, Valade was the 17th overall in the 2018 OHL Priority Selection. He went on to participate in the 2018 World Under-17 Hockey Challenge in New Brunswick for Team Canada Black and recorded two assists.

After the season, he spent the summer landscaping, gardening, and cutting grass – which gave him time to reflect on how to succeed on the ice going forward. The extra downtime spent fishing also helped.

“I like to fish pretty much anywhere that I can get my rod in the water,” Valade said, admitting that he would love nothing more than to make some special hockey memories with the Rangers to go with his best fishing tale.

“I was in Manitoulin Island with one of my buddies and we … hooked onto a pike,” he said, adding, “We didn’t have a net because we weren’t expecting anything that big and it took us about 15 minutes just to get it into the boat with our bare hands.”

“We got it about halfway into the boat but then it jumped back in the water. We were a little scared that we had lost it, but we got it in eventually.

“That was probably one of the coolest things I’ve ever done.”

With that sort of determination, he has returned with even more swagger and drive to surpass the national team experience and the five goals in 62 games during his rookie OHL campaign.

“I think the biggest thing is confidence,” he said needed the most improvement coming into the 2019/20 season.

Arriving in Kitchener as a first-round pick, the organization knew what they were getting with his combination of speed and skill. Being considered such a catch makes the avid fisherman very flattered, but it hasn’t added any pressure.

“It’s always nice to know that I have such a supportive group behind me, but I’ve never been one to feel any pressure. I just go out and play hockey,” Valade said

What that means specifically for the 5’10, 162lb forward is just “going out and making an impact every shift.”

“The biggest thing is trying to contribute to the team as best as I can, whether that’s scoring goals in a close game or making a big defensive play,” he said.

Having familiarity with his returning teammates’ tendencies has also been key to Valade surpassing last year’s goal total after just 18 games.

“You come back and you’ve already had a year to figure things out and pick up on little things that your teammates do,” he said of already getting to seven goals.

“Just coming in and knowing what to expect has been a really big help.”

Lining-up regularly with the likes of Isaac Langdon, Mike Petizian, and rookie Declan McDonnell has also been key to his personal success.

“We’re practicing and spending so much time together every day that you pick up on their tendencies pretty quickly,” he said.

“It feels really good on the ice when we have that chemistry going.”

Overall, the closeness of this year’s roster has been an added bonus too.

“It’s a tight-knit group this year. We have a lot of solid guys in the dressing room and there are good vibes in there – even when things might not be going the way we want,” he said.