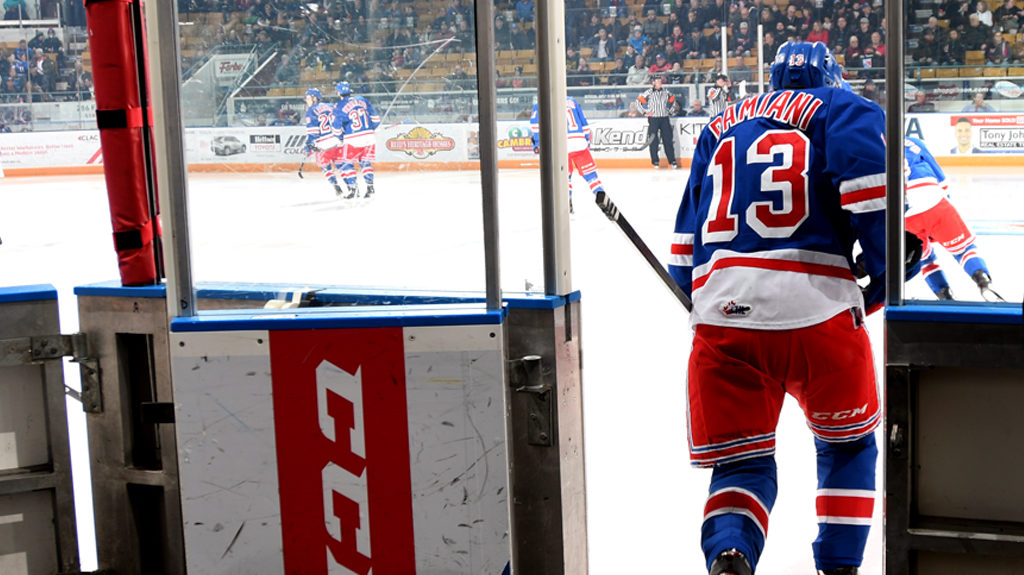 Coming into this season, Riley Damiani had an idea. It wasn’t a new set play or playlist for the dressing room; instead, it was an idea to help support kids dealing with childhood cancer.

Riley wanted to find a way to help show these children they are not alone in these difficult times. This is how the Clips for Cancer campaign came into fruition.

“Over the summer, I talked with Greg about it and right away he was on board. Then we came back to Kitchener for the season, and we talked Justin, and they were all for it,” said Riley. “After participating in Clarky’s Kids events and seeing how much these kids are going through, it was a no-brainer for us. We knew we had to do something.”

Riley, Greg Meireles and Justin MacPherson will all have their heads shaved by fans on the ice, following the game on March 15th. The four lucky fans will be selected at random from a list of all donors to Clips for Cancer. All the proceeds support the Pediatric Oncology Group of Ontario, a beneficiary of our Clarky’s Kids program.

For Riley, he knew coming into this season he was going to find himself in more of a leadership role both on and off the ice. Now in his third season, he can see that community work is a significant part of this.

“When I was younger, I would follow along with the OHL, and I saw the way the guys carried themselves. I would see them out in the community, and they always managed to put a smile on my face no matter what they were doing,” said Riley. “There are a lot of people that know us around here, which is pretty humbling. I like to give back to the community who continuously gives so much to us.”

This season, one community outreach appearance hit home for Riley. Just before the Christmas Break, the children who participate in our Clarky’s Kids program were invited to The Aud for a special Christmas party with Santa Claus and the Rangers. It was on that night that the boys knew they had to make this campaign happen.

“Spending time with these children who are struggling really puts everything into perspective. They always have the biggest smiles on their faces,” smiled Riley. “People think we are tough because we play hockey, but these kids are the toughest people on the planet. To go through that at such a young age and still have a smile on your face is pretty remarkable.”

Riley has seen first-hand through family and friends, the struggles that are associated with cancer. When it comes to childhood cancer, these struggles are amplified.

“One of the main things that these kids deal with can be their friends not really understanding what they are going through. Some of them might lose their hair, so we wanted to shave our heads as a statement to say they’re not alone.  Maybe if they see us shaving our hair, it may make them feel better about losing theirs.”

Fans have the opportunity to donate to Clips for Cancer until March 8th. Riley and the boys are encouraging fans to donate, even if it’s as little as five dollars—everything helps.

“We are asking fans to help us support kids that really need it. I think it’s going to be pretty fun to shave our heads too. We are pretty nervous, not going to lie,” laughed Riley. “We are grateful for any support you can give. All we want to do is make sure these brave children know they’re not alone.”