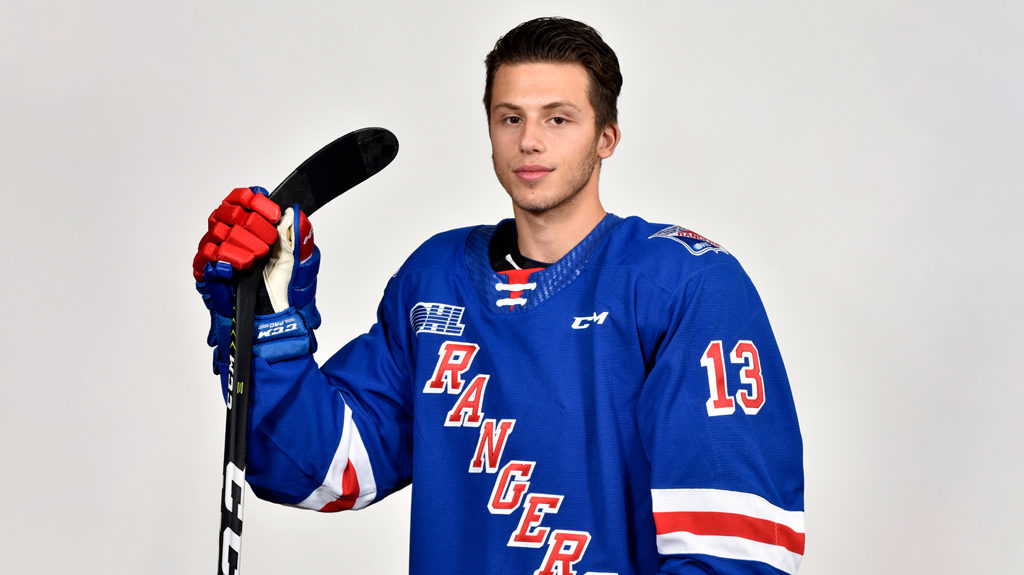 It’s only natural to appreciate things more as you get older. Ask Rangers veteran Riley Damiani about his OHL career and he couldn’t feel luckier to have played it in Kitchener.

Growing-up in Mississauga and watching the Majors and IceDogs (when they called the city home), Damiani pointed out how “you didn’t necessarily see a lot of people going out to watch those games.”

“That’s what I thought every rink and game was going to be like,” said the now 19 year-old centreman.

After being picked by the Blueshirts in the 2016 OHL Priority Selection, his perception quickly changed – which is typically the case with players coming to the region.

“Getting drafted by Kitchener and playing in front of 7,000 fans packing our rink, it was like playing in an NHL game the first time out,” he recalled.

“Being in an environment like this and having the support of the fans and community has just been huge.”

Aside from the fanbase creating an unforgettable environment to play in, Damiani is just as quick to acknowledge how the off-ice support has made his transition to the pros a lot easier.

“The preparation here and the way we’re taken care of by the trainers, coaching staff, and management is like no other. We’re really lucky here in Kitchener to have all of those benefits,” the Dallas Stars prospect said.

“When I go to an NHL camp, it’s more or less the same thing. I’m not really out of my comfort zone as much as some other guys.”

That support also extends from the network of Rangers alumni – like Damiani’s former teammate Adam Mascherin, who is a fellow prospect in the Stars’ system.

“We talk quite a bit. I try to get the inside scoop of what’s going down in Dallas and he’s always asking how we’re doing,” said Damiani of the long-standing friendship between the two.

“It’s good to have someone you know at an NHL camp because it gets a little nerve-wracking when you’re there standing with guys like Tyler Seguin and Jamie Benn,” he said, describing Mascherin as a “joker” that has a way of keeping the mood light to help the his fellow younger teammates.

That sort of lead-by-example approach is what Damiani has embraced this season as the Rangers’ co-captain alongside Greg Meireles.

“It’s my fourth year in the league now, so I’ve seen a lot and know what to expect,” Damiani said of his added responsibilities.

“I pass that knowledge along and hope that the younger guys learn from it.”

One of the lessons that’s stuck with him throughout last year’s 30-goal season and the current one is the importance of building a rapport with linemates quickly.

“Playing on the same line with Yantsis, a 50-goal scorer last year, you know he’s going to be in the right places,” he said of building his assist totals.

“A guy like Reid (Valade) on the other side is quick and plays with a lot of pace. When you’re lining-up with a guy like that, you have to be able to keep up and make plays really fast” he said.

“With all of those things combined and clicking, it’s a recipe for success.”

As one of only three players on the roster currently averaging at least a point per game (Meireles and Liam Hawel are the others), Damiani also credited the team’s close-knit environment for giving him a chance to flourish as well as turn the group’s season around.

“There are no individuals here. When we were going through our tough stretch, we had a lot of meetings and talked things out. I think that’s the reason we started to succeed again,” he said, adding, “Everything’s coming full circle. Everyone’s back and healthy.”

“We’re playing with a lot of confidence and, when you do that, a lot of our guys are unstoppable.”

As he continues what could be his last season in Kitchener, Damiani is going to continue soaking everything in – because this experience will never come again.

“For junior hockey fans, this place is like no other.”