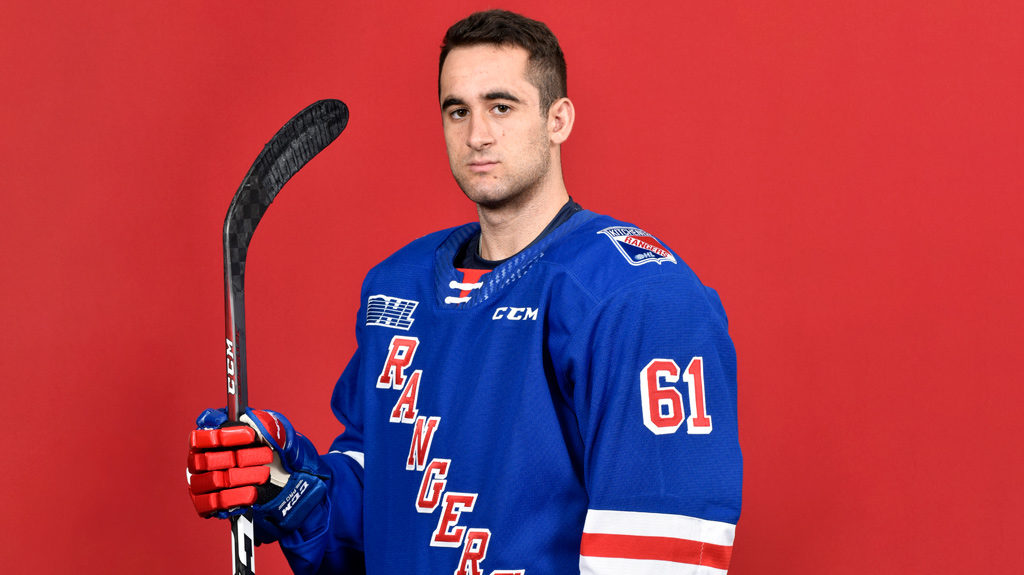 Ryan Stepien’s path to joining the Kitchener Rangers via trade is not unlike his teammates Jacob Ingham and Liam Hawel.

“When I first got here, I was really relieved it was Kitchener. It’s a great place and organization, good people, and good things happen here,” said the 18-year-old.

Acquired last December for Jack York, Stepien played in 68 games with Saginaw and recorded 11 goals after being picked 41st overall in the 2017 OHL Priority Selection.

“I was really excited to get the chance to just play hockey and not have to worry about the outside stuff, like playing time, if I’m in the line-up, or anything like that,” Stepien reflected on his fresh start with the Blueshirts.

“The coaching staff told me there’s a specific reason that I’m here and I’m not just some player they got in a trade. They did their research on me, liked how played and thought I could bring a lot to the team,” Stepien said.

In his 47 games with the Rangers since that reassuring conversation, he has already matched his previous goal output while also surpassing his points total by four. His stats to start the 2019/20 season also has him on pace for 30 goals, which would be triple his previous season-high of 10.

Despite his strongest offensive start ever, Stepien is fully aware that his main responsibility is “being a part of that shutdown line that scores every once in a while, too.”

“I think it’s a good role, considering we already have a lot of firepower,” assessed the Stoney Creek, ON native.

What makes his experience unique to his aforementioned teammates is the extra time to get familiar with the passionate Rangers fan base.

“As a visiting player, Rangers fans are always behind their team when they’re playing at The Aud. It’s just a tough building to come into,” he said.

“You know it’s going to be loud and Kitchener’s always a tough team to play against, so it’s always a challenge coming here as a visiting player. It’s electric.”

Once on the flip-side, Stepien admitted that playing with a pair of dynamic players helped his notoriety in #RTown.

“I think, last year, a lot of fans started to recognize my name more when I played on the same line as Damiani and Hugg. We played a lot of minutes and scored a good amount of goals, so that’s when people finally started to realize who I am,” he reflected.

Having a few familiar faces around the locker room was certainly an added bonus as well.

“I knew a couple of the guys already too. I knew Arber pretty well, I knew Petizian a little bit, and they helped me through it all,” he said.

And as dedicated as he is to the Rangers, it’s only one of multiple teams (Toronto Maple Leafs, Toronto Blue Jays, and Juventus soccer club) the passionate sports fan follows on a regular basis.

“I watch a lot of sports, so whether it’s videos on YouTube, highlights, or a live game, I’m always watching some kind of sports,” he admitted.

He also played a lot himself, specifically on the baseball diamond as a shortstop. Once he was drafted to the OHL though, he ultimately found his true calling.

“I spoke to a lot of teams and they were trying to convince me not to quit baseball but, ultimately, I liked hockey better,” he said.

“I was still pretty good at baseball but my arm was starting to go a little bit too,” he added jokingly.

Considering his sporting experience, he’s keenly aware what it takes for a team to be successful – and he fully believes the Rangers have found the right mix with its current roster.

“We have a lot of offensive threats, good defencemen, and traded for Ingham – a great goalie,” he said.

“We have a really good team this year and it’s a great group of guys.”