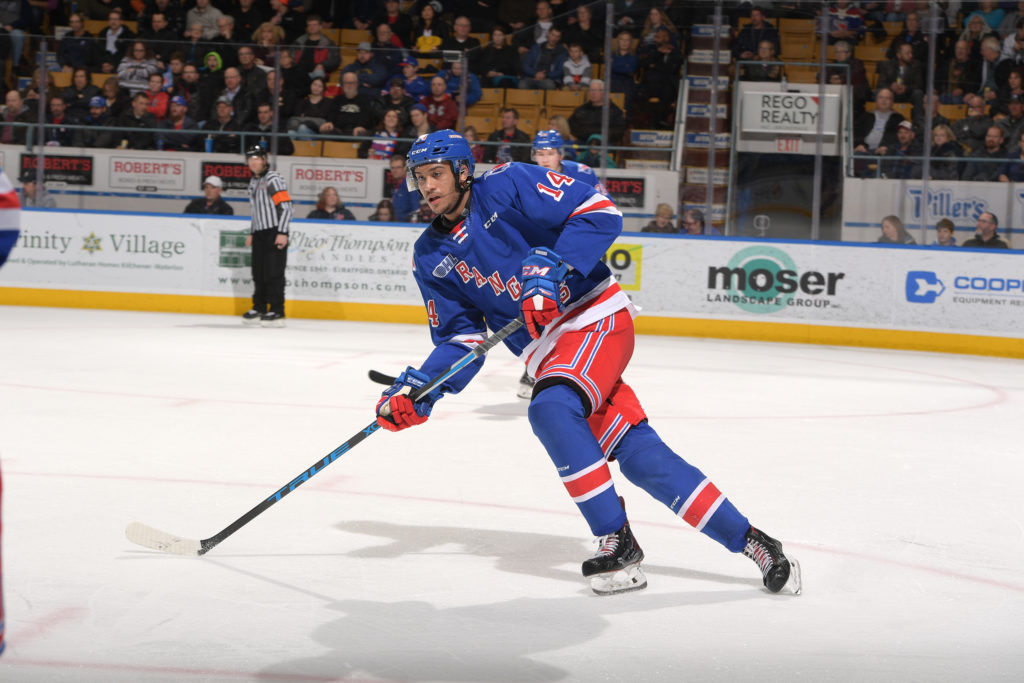 By Serron Noel’s own admission, he possesses a unique blend of size, speed, and skill.

“It’s an uncommon combination that I have, which you don’t see in bigger guys like me,” said the 6’6” Ottawa native, who was acquired just before the OHL trade deadline from the Oshawa Generals.

In fact, only one other person in the entire league stands taller and that is 6’9” Curtis Douglas of the Windsor Spitifires. Unsurprisingly though, both are now NHL prospects.

“It’s actually crazy to think about where I started to putting the Panthers’ jersey over my head,” said Noel of the moment his name was called as the 34th overall pick at the 2018 NHL Draft by Florida.

“I was a little bit anxious and my memory was kind of blacked out a bit when my name was called. I was so thankful that all of my family was there.”

“If I were to go back and someone were to tell me at a young age, I wouldn’t even fathom it. I didn’t even think it was a possibility.”

The reason he says so is because he had no interest in hockey growing-up in the nation’s capital.

“Originally when my dad asked me if I wanted to play and I said no way,” Noel said.

He was resolute until one particular day after school.

“There were a bunch of kids playing road hockey every night on our street and, when I was younger, I was always outside wanting to do something active,” said Noel.

“One day, I finally decided to grab one of the sticks my dad just kept in the garage and went out to play with some of them. There were about eight of us out there and I remember falling in love with the game right from the start.

“That night, I told my parents that I wanted to start playing regularly,” he recalled with a smile.

Since the first time he put on skates though, making friendships with others was just as important as the sport itself.

“Just being able to meet new people and make new friends while also sharing experiences with them was so great,” Noel said.

Since arriving in Kitchener by way of trade with the Oshawa Generals just before this season’s trade deadline, his social circle has grown even stronger.

“The guys here just took me in from Day One and really made me feel a part of the team. I really appreciated them making it an easy transition,” said Noel, who recorded 184 points (83 goals, 101 assists) in 221 career games with the Generals.

“Everything has been amazing so far. Everyone here from my billets to the coaching staff to my teammates are great. Everyone in the organization has just been amazing to me,” he said.

Being able to settle-in quickly and comfortably has allowed him to continue working towards his goal of bringing his all-around game up to where it needs to be to play pro hockey and make a deep playoff push this year.

“It’s still a work in progress. Sometimes it’s a little harder for someone as tall as me, but I think I’m doing well. That’s not to say there isn’t still some areas to improve in,” Noel said.

That admission is somewhat surprising considering he was awarded Oshawa’s “Eric Lindros Top Forward” award after scoring 34 goals just last season, but it speaks to the drive that he possesses to make it to the next level.

On top of that, after many previous trips to The Aud as a visiting player, he will now have all of Rangers Nation solidly in his corner to help reach his goals.

He also got a taste of what that support is like as a member of Team OHL during game three of the CIBC Canada Russia Series held in Kitchener this past November.

“All the support the Rangers get, the 7,000 fans that are there every game, it’s pretty overwhelming and pretty exciting.”