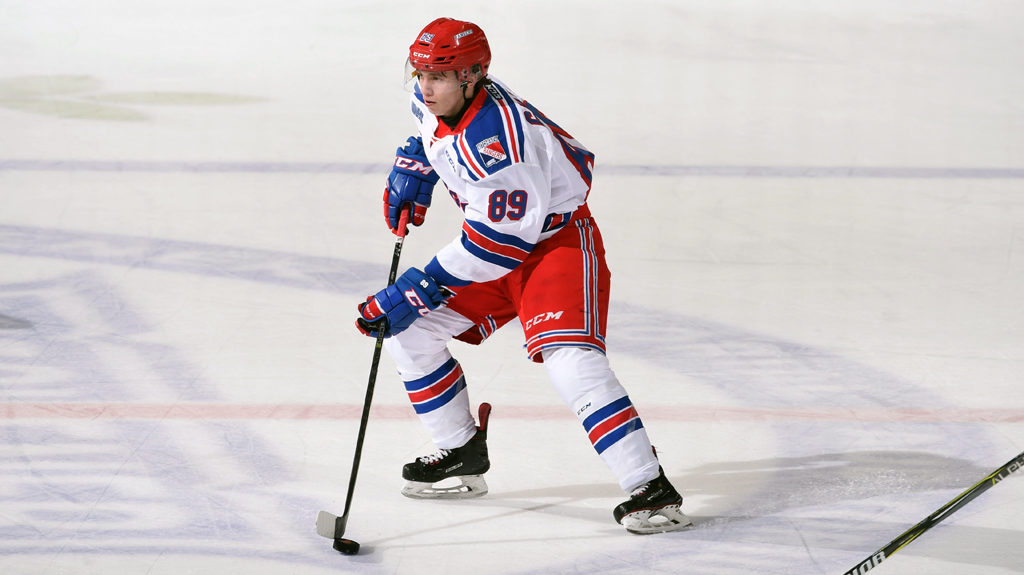 “Well, I have an unpopular opinion, I’m more of an apple pie kind of guy,” said Eric.

Over the Thanksgiving weekend, Eric Guest took some time to reflect.

Eric, a now two-year veteran entering his third season with the Rangers, knows the importance of family in such a high-paced and demanding league. Fortunately, his family only lives an hour down the 401 in London, ON and makes it out to almost every home game.

“I enjoy seeing them a lot as it helps me not get too homesick. I go home whenever I get the chance,” Eric replied. “I got to go home this weekend for a nice Thanksgiving dinner on the Monday.”

While Eric looked forward to the apple pie and other scrumptious desserts—except the pumpkin pie— he was eager to spend some time at home, catch up with his family and have the day to recharge.

Eric has kicked off this season with four points in the last six games, earning a +1 plus-minus. Although on-ice performance is important, Eric knows there is a lot more to his game off the ice.

“Being in my third year, I’m one of the older guys so I’m just trying to bring some knowledge and experience to my younger teammates.”

“It is important to show them what kind of work ethic is expected as a Ranger. I always strive to lead both on and off the ice,” he said.

It is precisely that leadership mentality and hard work ethic which has led Eric to great accomplishments in his young career. When asked to name some highlights, two stuck out in his mind— getting drafted 47th overall by the Rangers in the third round of the OHL Priority Selection and playing for Team Canada Red in the 2016 World Under-17 Hockey Challenge.

“Playing for Canada was probably the highlight of my career so far,” he said humbly. “It was an absolute honour to represent my country.”

Despite these successes, Eric has had to face adversities throughout his hockey career.

“There are going to be setbacks in anything you do, but as a Ranger, we have a great support system surrounding us who keep us positive and focused.

Injuries and other misfortunes happen— it’s inevitable in such a competitive environment. However, it’s players like Eric, who through their own support systems, are able to help build their teammates up in those moments of hardship.

“It’s important for us to stick together as a team in those difficult times,” he said. “Keeping a positive attitude is the first step.”

Looking ahead to the rest of the season, Eric is confident that he and his teammates can break down some barriers and push themselves to the top of the league.

“A lot of people are underestimating us and I think we can surprise a lot of teams with that. We have a good lineup all around and have a really hard-working team.”

Eric knows that throughout the season, his family, team and the Ranger community will support him. And for that, he is thankful.