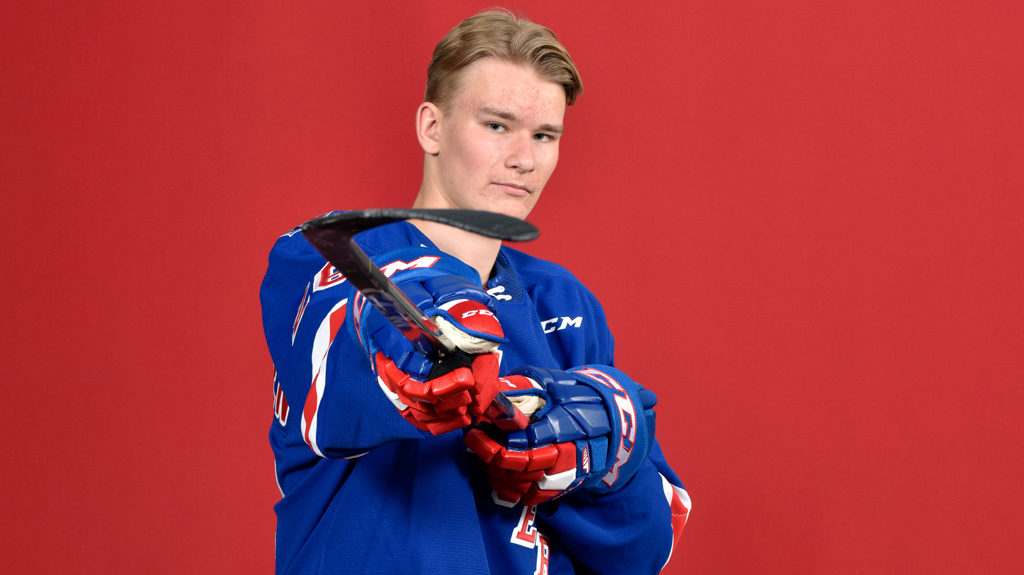 Talk about a trip to remember.

Usually, the tourist attractions within driving distance of Kitchener are what get most visitors excited. The same could be said for Ville Ottavainen’s family when they arrived in North America for the first time from Finland earlier this season.

Incredibly enough, the defenceman provided the vacation highlight at The Aud.

With both of his parents watching the Rangers defeat the Sudbury Wolves 7-3 on Thanksgiving Monday, Ottavainen recorded a four-point game in the process – which included his first career OHL goal.

“Since it was the first game they saw live here, it was an unbelievable feeling,” Ottavainen said about the special occasion.

“I didn’t even know I had the two assists. I thought I only had one,” he commented about finding out the final tally in the box score.

As memorable as the game was, his family’s reaction varied from subdued to excited.

“They said, “Good game,” Ottavainen reflected with a laugh about his parents’ post-game feedback.

Social media produced a bit more of a reaction.

“I went on my Twitter feed, and there were a lot of “likes,” and a couple new follows,” he said, adding, “My friends back home sent me messages to congratulate me. They always have my back, and it’s amazing.”

A native of Oulu, Finland, Ottavainen was the 35th overall selection in the 2019 CHL Import Draft by the Rangers. He was a part of the Kärpät junior program the past two seasons and registered nine goals and 34 points in 49 regular season games played in 2018/19.

“They say that half of Finland supports Kärpät. The organization is great. They’re always producing super-stars like Sebastian Aho and Jesse Puljujarvi to the NHL,” Ottavainen said.

He has also represented his homeland at the Under-16 and U-17 level.

With the ability to play physically while still possessing a good shot and a knack for breaking-out the attack from his own end, the 2020 NHL Draft eligible player saw Kitchener as his best path to the pros.

“We thought about it a lot. Since last December, my family and I were talking about whether it would be possible to come here and play,” he said.

“We thought that coming here was the best decision for my career.”

So far, things have worked out as they envisioned.

“We have former NHL players as coaches, and the organization has been great so far. I have nothing bad to say about the experience.”

Settling-in on this side of the Atlantic can also be credited to the structure his parents implemented in his life from an early age.

His dad (a police officer) and mom (a teacher) always ensured he was getting his work done before hockey practice.

“If you weren’t doing great in school, that wasn’t a good thing around our home – so putting in the work is pretty normal for me,” Ottavainen said.

That approach included learning languages like English, and it has allowed him to gel with his new teammates relatively quickly.

“They obviously understand that I’m from Finland so this isn’t my first language. I think my English was pretty good when I got here so I haven’t really seen that big of a difference.”

His affinity for rap music, and American artist Travis Scott, in particular, has helped.

“I always listen to it pre-game,” he said, singling out “Sicko Mode” as his favourite track.

“It just gets me going before games and into a good mood.”

He was also quick to give a lot of credit to his billet family for helping him.

“They’ve been awesome for helping me adjust to living in Canada.”

While all of this doesn’t prevent feeling homesick at times, he can thank technology and nightly Fortnite video game sessions for helping him stay connected with those he’s closest with.

“Back home, I have two friends specifically that gave me the confidence. They just told me to just come here and play my game, do my best, and I’ll be fine.”